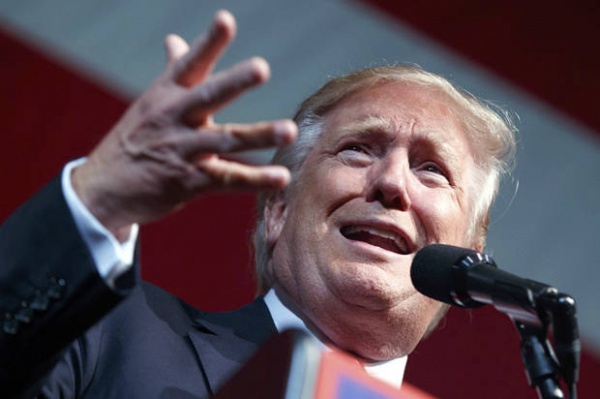 The shadow of illegitimacy stalks President-elect Donald Trump. Those are not words to be written lightly. But they are becoming harder to avoid as Trump’s presidency-in-waiting becomes increasingly mired in scandal before it’s even begun.

Civil rights hero John Lewis shocked the world on Friday by saying bluntly that Trump is not a legitimate president (Trump responded in a Tweet on Saturday, hitting Lewis for the state of his Georgia congressional district). Lewis put his considerable moral authority on the line to make such a bold statement – though anyone who knows his history knows that he’s always been bold. But he is hardly the first person to think it: that this president increasingly lacks the core element required for a broad sense of legitimacy: strong public confidence that he was honestly and fairly elected, and will act in the national interest, and not some other interest – financial or worse – as president.

It’s not that Americans, including Lewis, are refusing to accept that Donald Trump will be the president once he’s sworn in, the way birthers, including Donald Trump, did to Barack Obama. But birthers were a tiny fraction of the public, and their insane theory of Obama’s secret Kenyan birth remained confined inside the Republican Party base. Obama entered office with approval ratings approaching 70 percent, and with even some Republican voters basking in the glow of his election as the nation’s first black president.

Trump, on the other hand, is now officially the most unpopular President-elect in modern American history. According to a new Quinnipiac poll, fewer than four in 10 Americans approve of the President-elect. Trump is upside down in terms of public confidence in nearly every measure, from his honesty, to his leadership skills, to whether he is level-headed, and even whether he will help improve people’s personal finances, which was his strongest suit going into the election. Just four in 10 believe he can unite the country. Trump retains just two majority positions that are positive: on his intelligence and the notion that he is a “strong person.” But even those measures are sliding.

Meanwhile, majorities of every group except Republicans (who are approximately 29 percent of the adult population) and white voters without a college degree believe the Russians interfered in the presidential election and want that intervention investigated.

Starting this weekend, Trump will be the subject of multiple citizen protests in Washington D.C. and around the country, including a civil rights march in Washington on Saturday and what could be a massive women’s march the day after the inaugural.

Every new revelation about Trump and his team chips away at Trump’s already low standing; whether it’s the research dossier from a former MI-6 agent that gave rise to derisive Trumpisms related to beds full of urine, but also raised new and troubling questions about the Trump campaign’s potential contact with the Russians, and whether the FBI refused to investigate them in favor of haunting Hillary Clinton; or the news that Michael Flynn, Trump’s pick for national security adviser, placed multiple phone calls to the Russian ambassador the same day President Obama expelled 35 Russian diplomats as a sanction for the hacking of the Democratic National Committee.

As the drip, drip, drip of scandal continues, regarding not just Trump, but also the conflicts of interests hovering over his billionaire cabinet; and as Trump’s stunts – like the piles of folders filled with blank paper at his bizarre, ranting press conference – lose their entertainment value, the idea of a majority of Americans quietly acquiescing to Trump’s leadership and holding him in high esteem because he is president is simply not happening. Not when millions of Americans continue to question his qualifications, his temperament, his ethics, and yes, for many, the legitimacy of his election. If the late night comedy shows are a barometer, Trump is starting off his presidency wrapped in ridicule, not reverence.

Trump, for his part, seems unwilling to take even the most rudimentary steps to shore up public trust in his impending administration. He flouts every convention and presidential standard, seeming to almost dare the country to stop him.

Trump could divest himself of his businesses, rather than handing them off to his sons – assuming that’s possible with the patchwork of hundreds of LLCs and licensing deals that seem to make up his corporate holdings. But he won’t. He could release his tax returns and set the minds of ethics watchdogs at ease. But he won’t.

He could call off his lapdogs in Congress like Rep. Jason Chaffetz, head of the GOP’s Quisling Wing and chairman of the House committee ostensibly charged with being a check on the executive branch. Instead, Chaffetz has repurposed his House Oversight and Government Reform committee to act as Trump’s goon squad. He is currently threatening to drag the head of the Office of Government Ethics before his committee to make him answer for his insolence in questioning the incoming President. Americans should not hold their breath.

In fact, the brazenness of Republicans’ covering for Trump is only encouraging him, while creating the appearance of a party more interested mollycoddling corruption at the top rather than fighting it.

Meanwhile, a second GOP wing, led by House Speaker Paul Ryan and Senate Leader Mitch McConnell, seems determined to simply ignore Trump’s ethical outrages and foreign dealings in order to use him to advance their pet causes: which have nothing to do with Trump’s campaign.

Ryan in particular displays a determination to strip 26 million people of health insurance on the road to dismantling 100 years of federal public policy based on the notion that the federal government should provide a healthcare and retirement safety net for Americans, that is almost breathtaking to behold. His and other GOP leaders’ gall exposes the incoming President to the potential outrage of his own supporters, who if he signs onto Ryan’s plans to repeal the 20th century along with Obamacare, will look like a fraud who plied the struggling with promises of economic aid, only to turn on them and give away the store to the 1 percent.

Meanwhile, Trump’s bizarre orientation toward Russia risks fully alienating him from the intelligence community, and from the small wing of the Republican Party that’s still determined to conduct itself as a co-equal branch of government. If Republicans begin to see Trump as a liability, even Chaffetz’s best Renfro act won’t save him.

Trump could in theory use his inaugural address to fix some of these glaring problems; to humble himself and try and unite the country behind him. So far, though, he has shown no signs of being interested in talking past his electoral college win, with a few parting shots at Hillary Clinton and the media for good measure.

He has refused to reverse himself on the toxic aspects of his campaign; on race, gender, religion and more – features that prompted the revival of the KKK and the emboldening of white supremacist and anti-Semitic groups – or to relieve himself of the specter of intolerance that infects his team via the poisonous presence of Stephen Bannon, or deeply tainted attorney general nominee, Jefferson Sessions.

It was unsurprising then, that African-American singer Jennifer Holliday reaped the whirlwind Friday when she confirmed that she will perform at a pre-inaugural event on the National Mall, or that comedian Steve Harvey, who recently had a Trumpian moment of his own, insulting Asian-American men, got caught in a buzz saw of negativity after meeting with his former Miss Universe boss at Trump Tower on Friday and saying he plans on working with Ben Carson, Trump’s improbable nominee for HUD Secretary, on inner city housing initiatives while adding that he doesn’t even know who Sessions is. (Harvey will host the pageant again at the end of the month). The meeting prompted fellow comedian D.L. Hughley to accuse Trump in an Instagram rant of “pretending to care about black people by standing next to black celebrities,” with his outreach boiling down to “a comedian, a rapper and a football player” – a reference to Trump’s previous Trump Tower “black friends” displays with troubled hip hop star Kanye West and former football great Jim Brown. In Hughley’s words, given his continual disrespect for President Obama, Trump wants black Americans to “run the ball, but not run the country.”

Trump’s entire orbit is so toxic it burns up anyone who enters it.

Some on the right will carp that Trump is being denied the usual honorifics and the presumption of legitimacy because he is a Republican. But Trump is no ordinary Republican. His candidacy was so infused with vicious racial and religious bigotry, and so tainted by his bizarre fealty to a foreign adversary, it’s impossible to disentangle the rot from his coming presidency, not least because so far, Trump has refused to do so himself.