According To Reports, Russia Has Compromising Information On Trump 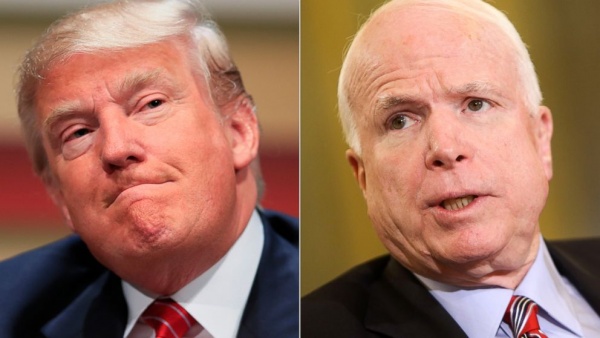 Senator John McCain passed documents to the FBI director, James Comey, last month alleging secret contacts between the Trump campaign and Moscow and that Russian intelligence had personally compromising material on the president-elect himself.

The material, which has been seen by the Guardian, is a series of reports on Trump’s relationship with Moscow. They were drawn up by a former western counter-intelligence official, now working as a private consultant.

The Guardian has not been able to confirm the veracity of the documents’ contents, and the Trump team has consistently denied any hidden contacts with the Russian government.

Trump’s transition team did not immediately respond to a request for comment, but late on Tuesday, Trump tweeted: “FAKE NEWS – A TOTAL POLITICAL WITCH HUNT!” He made no direct reference to the allegations.

An official in the US administration who spoke to the Guardian described the source who wrote the intelligence report as consistently reliable, meticulous and well-informed, with a reputation for having extensive Russian contacts.

Some of the reports – which are dated from 20 June to 20 October last year – also proved to be prescient, predicting events that happened after they were sent.

One report, dated June 2016, claims that the Kremlin has been cultivating, supporting and assisting Trump for at least five years, with the aim of encouraging “splits and divisions in western alliance”.

It claims that Trump had declined “various sweetener real estate deals offered him in Russia” especially in developments linked to the 2018 World Cup finals but that “he and his inner circle have accepted a regular flow of intelligence from the Kremlin, including on his Democratic and other political rivals.”

Most explosively, the report alleges: “FSB has compromised Trump through his activities in Moscow sufficiently to be able to blackmail him.” The president-elect has not responded to the allegations.

CNN reported on Tuesday that the FBI was still investigating the credibility of the documents but added that the intelligence chiefs had included a summary of the material in a secret briefing on Russian interference in the election delivered last week to Barack Obama and Donald Trump.

The emergence of the documents is potentially explosive, 10 days before Trump’s inauguration and on the eve of his first planned press conference since July last year.

Despite glowing references from US and foreign officials who have worked with the source, there are some errors in the reports. One describes the Moscow suburb of Barvikha as “reserved for the residences of the top leadership and their close associates”, but although it is a very expensive neighbourhood, there are no restrictions on who can own property there. The document also misspells the name of a Russian banking corporation.

The FBI does not normally make any comment on ongoing counter-intelligence investigations but was under increasing pressure from Democrats and some Republicans to act before the inauguration, particularly because of Comey’s announcement of a continuing investigation into Hillary Clinton’s email server 11 days before the election, which many of her supporters believe cost her the presidency.

The reports were initially commissioned as opposition research during the presidential campaign, but its author was sufficiently alarmed by what he discovered to send a copy to the FBI. It is unclear who within the organisation they reached and what action the bureau took. The former Democratic Senate leader, Harry Reid, has lambasted Comey for publicising investigations into Hillary Clinton’s private server, while allegedly sitting on “explosive” material on Trump’s ties to Russia.

Another Democratic senator, Ron Wyden, questioned Comey insistently at a Senate intelligence committee hearing on Tuesday on whether the FBI was pursuing leads on Trump campaign contacts with Russia.

“Has the FBI investigated these reported relationships?” Wyden asked.

Comey replied: “I would never comment on investigations … in a public forum.

The Guardian can confirm that the documents reached the top of the FBI by December. Senator John McCain, who was informed about the existence of the documents separately by an intermediary from a western allied state, dispatched an emissary overseas to meet the source and then decided to present the material to Comey in a one-on-one meeting on 9 December, according to a source aware of the meeting. The documents, which were first reported on last year by Mother Jones, are also in the hands of officials in the White House.

McCain is not thought to have made a judgment on the reliability of the documents but was sufficiently impressed by the source’s credentials to feel obliged to pass them to the FBI.

The Senate armed services committee, which Senator McCain chairs, launched an inquiry last week into Russian cyber-attacks during the election.

McCain was reluctant to get involved, according to a colleague, for fear the issue would be dismissed as a personal grudge against Trump. He pushed instead for the creation of a special Senate committee to look into connections between campaign staff and Moscow, but the proposal was blocked by the Republican leadership.

McCain told the NBC programme Meet the Press on Sunday: “I would like to see a select committee. Apparently that is not in agreement by our leadership. So we will move forward with the armed services committee and I’m sure foreign relations and intelligence committee will as well.”

But the senator added: “It is possible if enough information comes out, that that decision could be reversed. I still think it’s the best way to attack the issue.”

Asked on the same programme on whether an investigation was ongoing into campaign links to Moscow, Senator Lyndsey Graham, another conservative Republican said: “I believe that it’s happening.”

According to the report passed to Comey, Russian intelligence allegedly gathered compromising material during Trump’s stay in Moscow in November 2013, when he was in the city to host the Miss Universe pageant.

Another report, dated 19 July last year said that Carter Page, a businessman named by Trump as one of his foreign policy advisers, had held a secret meeting that month with Igor Sechin, head of the Rosneft state-owned oil company and a long-serving lieutenant of Vladimir Putin. Page also allegedly met Igor Divyekin, an internal affairs official with a background in intelligence, who is said to have warned Page that Moscow had “kompromat” (compromising material) on Trump.

Two months later, allegations of Page’s meetings surfaced in the US media, attributed to intelligence sources, along with reports that he had been under FBI scrutiny.

Page, a vociferous supporter of the Kremlin line, was in Moscow in July to make a speech decrying western policy towards Russia. At the time he declined to say whether he had been in contact with Russian officials, but in September he rejected the reports as “garbage”.

The Guardian has learned that the FBI applied for a warrant from the foreign intelligence surveillance (Fisa) court over the summer in order to monitor four members of the Trump team suspected of irregular contacts with Russian officials. The Fisa court turned down the application asking FBI counter-intelligence investigators to narrow its focus. According to one report, the FBI was finally granted a warrant in October, but that has not been confirmed, and it is not clear whether any warrant led to a full investigation.

A month after Trump’s surprise election victory, Page was back in Moscow saying he was meeting with “business leaders and thought leaders”, dismissing the FBI investigation as a “witch-hunt” and suggesting the Russian hacking of the Democratic Party alleged by US intelligence agencies, could be a false flag operation to incriminate Moscow.

Another of the reports compiled by the former western counter-intelligence official in July said that members of Trump’s team, which was led by campaign manager Paul Manafort (a former consultant for pro-Russian politicians in Ukraine), had knowledge of the DNC hacking operation, and in return “had agreed to sideline Russian intervention in Ukraine as a campaign issue and to raise US/Nato defence commitments in the Baltics and Eastern Europe to deflect attention away from Ukraine”.

A few days later, Trump raised the possibility that his administration might recognise Russia’s annexation of Crimea and openly called on Moscow to hack Hillary Clinton’s emails.

In August, officials from the Trump campaign intervened in the drafting of the Republican party platform, specifically to remove a call for lethal assistance to Ukraine for its battle against Moscow-backed eastern rebels.

Manafort stepped down in August as campaign manager and the campaign steadily distanced itself from Page. However, Trump’s praise of Putin and defence of Moscow’s actions in Ukraine and Syria remained one of the few constants in his campaign talking points.

Manafort has denied secret links with Moscow calling the allegation “an outrageous smear being driven by Harry Reid and the Clinton campaign”.

Since then, Trump has consistently cast doubt on Russian culpability for hacking the Democratic National Committee, defying a consensus of 17 national intelligence agencies. After Obama deported 35 Russian diplomats in retaliation for Moscow’s intervention, Trump praised Putin for not carrying out tit-for-tat deportations of US diplomats. “I always knew he was very smart,” he tweeted.

An FBI spokesman declined to comment after the CNN report.