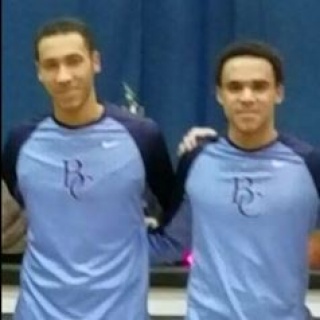 Walter and Julian Bonds still catch themselves looking for dad.

In the middle of a home game, the brothers might glance up to the top row of the bleachers at Bishop Canevin’s gymnasium. That was where Leon Bonds sat. Always. Every game.

“He never missed a game — fall leagues, spring leagues, summer leagues,” said Walter Bonds. “I’ll have a turnover and I’ll look up there for him. It’s just weird not seeing him there.”

Walter and Julian Bonds are seniors, two of the three Bonds triplets (they have a sister, Sydney). Walter and Julian are four-year starters for Bishop Canevin, co-captains of Crusaders, two of the lifelines of one of the top teams in WPIAL Class 2A basketball. But they are dealing with the sudden loss of their father, who passed away in December, only one month after being diagnosed with cancer.

The Bonds brothers hurt and grieve. Christmas was extremely difficult for them and their mother, Cheryl. There was no Christmas tree this year at their home in Green Tree.

And the story of these two brothers is also about how other teenagers can come together and use sports as a way to help a teammate cope and heal.

“Our teammates have definitely helped,” said Julian Bonds. “It can get lonely sometimes when you’re away from people. But your teammates just always being there, sometimes just sending a text message, saying, ‘how are you doing?’ That helps.”

Walter Bonds said, “We’re dedicating the season to my dad. It’s not even a personal thing. The team wanted to do it. I’m excited for it.”

Leon Bonds was 76 when he died (he had children late in life). He had been having neck pain for about a month before he went to a hospital Halloween night. Doctors found cancerous tumors in his neck. Then they found lung cancer. Things went downhill quickly

“We just had no time to comprehend things,” Walter Bonds said. “It was just, like, right away. Boom. It wasn’t like we were told he had three months or a couple years. It was like he was gone right away and that’s what made it very hard.”

Leon Bonds was a basketball player at Norfolk State and an assistant coach for his boys grade school teams through their years at St. Phillip in Crafton. Basketball is big in the Bonds family. Walter and Julian’s mother is a Milinski and the daughter of Walt Milinski Sr., a longtime coach who won a PIAA title as Seton-LaSalle’s coach in the 1980s and, coincidentally, was Canevin’s coach for a while in the 1960s. Cheryl Bonds’ brother, Walt Milinski Jr., is Carrick’s longtime boys coach. Walt Milinski Sr. regularly sat with Leon to watch Walter and Julian play.

Walter and Julian Bonds moved into the starting lineup at Bishop Canevin as freshmen. Kevin Trost became the Crusaders’ coach a year later. Walter, a 5-foot-11 point guard, has averaged in double figures since his sophomore year and made all-section last year. Julian is a 6-2 forward.

“It’s been tough on the whole team,” Trost said. “The boys were away from the team for about two weeks straight before their father passed because they just wanted to be with him. I know they wanted to be at basketball, too, but they needed to be with their dad. They’re the kind of kids who never miss a workout in the summer or anything. It was so weird even for me to come into the gym and not have them there.”

Trost said a number of opposing coaches have reached out to Canevin and the Bonds brothers, offering condolences. “Just because a lot of people know they’re great kids,” said Trost. “I think they’ve been playing better and better as time goes on.”

Trost has a rule that players can’t wear anything that is not given to them by the team. No arm sleeves. No head bands. But Walter asked if he could write something on his sneakers for his father. “RIP Dad Dec. 4th” is on Walter’s shoes. That is the day Leon Bonds passed away.

“I think a thing like this can affect everybody on a team,” Trost said. “But how teammates can come together in a time like this is nice to see.”

Talk to Walter and Julian and the pain of their father’s passing is clear. But so is the love for their father — and teammates.

“Taking the WPIAL and state is our goal,” said Julian.

Walter said, “Christmas was tough, him not being there Christmas morning. But Julian and I are captains of this team. We do need help with this, but we still need to be leaders and help others. We’re captains.”