Who will Americans miss more, Barack or Michelle Obama? He needs her, it’s become clear, the way ivy needs an oak. As this estimable couple shift into private life, others may need her as well, and lonely eyes will increasingly turn in her direction.

Michelle LaVaughn Robinson Obama is all of 52. She has, you suspect, a memoir to write. And after that? Whether or not she ultimately enters politics, her every move will be political in a way it has rarely been for most of this country’s first ladies.

She will be watched for lessons in how to speak for certain values, in how to behave, in how to live a meaningful and expressive and nondull life. The most interesting things she has to offer might still be in front of us.

A new book, “The Meaning of Michelle,” collects essays from 16 writers, many of them African-American women, about what it’s been like to witness Michelle Obama in the White House. “Witness” is the correct word. The first thing most of these writers admit is that they’ve been unable to take their eyes off her.

This is because, first of all, she so resembles them. The novelist Benilde Little, in her essay, notes that Mrs. Obama is entrancing, partly because she is “a dark-skinned woman without ‘classically’ beautiful features and no social provenance.”

Damon Young, the editor of the digital magazine VSB (Very Smart Brothas), suggests that while Mrs. Obama’s hair is full and stylish, it is not what is commonly and perversely referred to as “good hair.” He writes: “It was black hair, the type of hair that communicated to us all that she knew what her ‘kitchen’ was, was very well acquainted with the nap, and had a back-and-forth relationship with hot combs.”

Chirlane McCray, the first lady of New York City, describes meeting Mrs. Obama and simply “looking up in awe at a whole lot of tall and gorgeous.”

Many of the contributors to “The Meaning of Michelle” linger upon Mrs. Obama’s toned upper arms. At least one of them, this book’s editor, Veronica Chambers, admits to waking before 5 a.m. two days a week to try to get guns like that herself.

Tanisha C. Ford, an associate professor at the University of Delaware, considers the political implications of those arms. While Jackie Kennedy also wore sleeveless frocks, she writes, “her milky arms were read as lithe and petite, nonthreatening.” 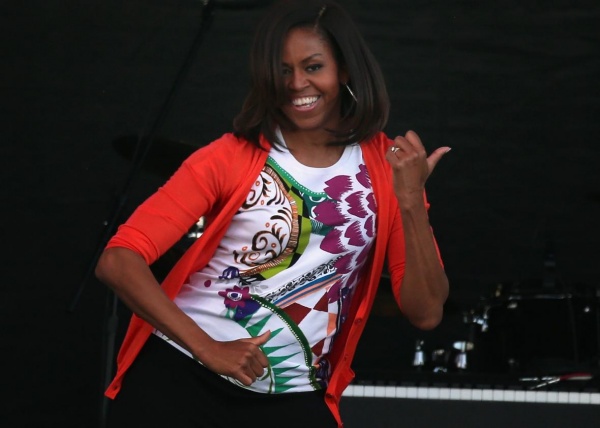 Conservative pundits found Mrs. Obama’s arms too masculine, Ms. Ford writes, and this fixation allowed them to “have a conversation about the whole of her body and the ways in which it was out of place in the White House.”

In what might be the finest essay here, Sarah Lewis, an assistant professor at Harvard, writes about the overlapping meanings of what it means to gaze at a public figure, and to be gazed upon.

“Authenticity is not an achievement,” she writes. “Yet authenticity does take effort if you are upending centuries of history with your mere presence. It takes work to let people stare, wonder, probe and prod to determine the veracity of your life.” Mrs. Obama performed an odd sort of service, Ms. Lewis writes, by “donating her body to the nation’s gaze for constant assessment for us all.”

Several of the writers in “The Meaning of Michelle” assess Mrs. Obama’s initiatives while first lady, especially her work to understand and prevent child obesity. Many seem more impressed by her work as a mother.

“When she declared herself mom-in-chief to the chagrin of many white feminists who felt that she should ‘lean in,’ many black women celebrated,” writes Brittney Cooper, an assistant professor at Rutgers University. “For once, African-American motherhood would be center stage in American politics in a celebratory manner. As mom-in-chief, Michelle Obama could correct decades-long stereotypes of black women as neglectful parents and money-grubbing welfare queens.”

Social class emerges frequently in this volume. Mrs. Obama does not come from money. Her father, who had multiple sclerosis, tended boilers at a water-filtration plant. The writer Ylonda Gault Caviness says that Mrs. Obama’s style and cadences, born during a childhood of modest means, are “as familiar to me as stovetop hot combs and fried chicken gizzards.”

Ms. Little notes that the members of Mrs. Obama’s family did not belong to the black bourgeoisie in Chicago. She contrasts Mrs. Obama’s upbringing with that of her fellow Chicagoan Valerie Jarrett, the Obamas’ political godmother, “who grew up going to her family’s home on Martha’s Vineyard,” and who “introduced that Black Bourgeois mecca to Michelle and Barack.”

When the essays here don’t work, it is generally because the contributor absorbed this book’s subtitle, “16 Writers on the Iconic First Lady and How Her Journey Inspires Our Own,” and took its second half too literally. The most first-person of the essays here are deeply solipsistic and third-rate. It’s Mrs. Obama these writers admire, but it’s themselves they wish to emote about.

Other contributions, such as Roxane Gay’s, seem to have been dashed off in the back seat of an Uber. The chef Marcus Samuelsson’s tepid essay may not have been literally phoned in, but it reads as if Ms. Chambers — she is the co-author of “Yes, Chef” (2012), his very good memoir — had merely transcribed a telephone conversation with him.

Mrs. Obama is compared to many historical and contemporary figures in this book, from Sojourner Truth and Zora Neale Hurston to Beyoncé and Angela Bassett.

The best thing about her, though, nearly all of these writers contend, is that she’s been like no one else at all.