Watch: Mom Calls 911 For Help And She Gets Arrested 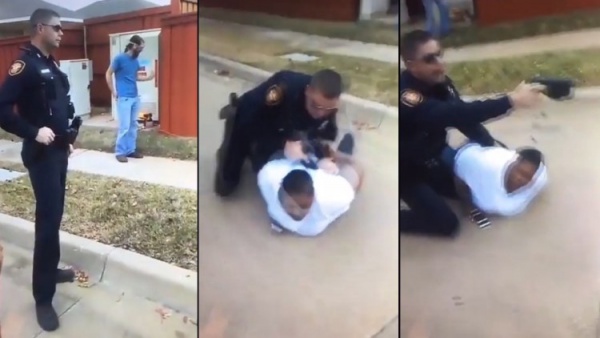 The full video of a white Fort Worth police officer wrestling a black woman to the ground before detaining her and her two daughters has been posted on YouTube. (Watch below.)

The video shows about 11 minutes of the scene from Wednesday before the officer, whose name has yet to be released, arrived and arrested Jacqueline Craig, 46, who had called police to report that her neighbor choked her 7-year-old son to get him to pick up trash.

Warning: The entire video contains an abundance of profanities and obscenities.

The extended clip also shows about 12 minutes of the aftermath of the encounter, in which Craig's 19- and 15-year-old daughters were also arrested.

The extra footage was not included in the original six-minute video that went viral almost immediately after it was posted on Facebook by Porsha Carver. The video currently has 3.2 million views.

While there are no new revelations about the encounter between the unnamed Fort Worth officer and the family, the new video includes footage that may help police with their internal investigation.

Fort Worth police told KDFW-TV (Channel 4) that internal affairs now has copy of the extended video as well as the cellphone, though it has not been analyzed.

The video shows Craig and her family standing near the man who allegedly assaulted her son while he paints a fence, apparently trying to ignore them.

The video captures the 911 call Craig makes to report the assault, and the ensuing time they wait for the responding officer to arrive. The dispatcher asks Craig if she's already called and she says no, but then asks the dispatcher why no one has arrived to the scene yet.

"I want to press charges," Craig says. "This is a grown man. He grabbed a 7-year-old kid and choked him."

About seven minutes into the video, an unidentified man who apparently knows Craig arrives to the scene and approaches the man painting the fence. He tells the man to leave his hands off the boy and then drives off.

When the unnamed officer arrives to the scene about 12 minute into the video, he talks to the white man who allegedly assaulted Craig's son before speaking with Craig.

The officer is then shown wrestling Craig to the ground, arresting her two daughters and kicking one of them as he put her in a squad car. He takes the phone away from one of Craig's daughters, but doesn't turn it off. The video is dark but still recording audio.

"It don't matter," the girl responds. "You kicked me."

The officer, apparently confirming that he did in fact kick her, says "Yeah."

"You kicked me on my side," the girl says.

The Fort Worth Police Department is currently investigating the way the women were treated.

The family's attorney, Lee Merritt, said Thursday that the officer's actions were racist, claiming that if the child had been white and the man accused of hurting him had been black, "there's no way on God's green earth" that he would walk free.

Fitzgerald said he "noticed the officer was rude" but that he could not call his actions racist. "There's a difference between rude and racist," he said.