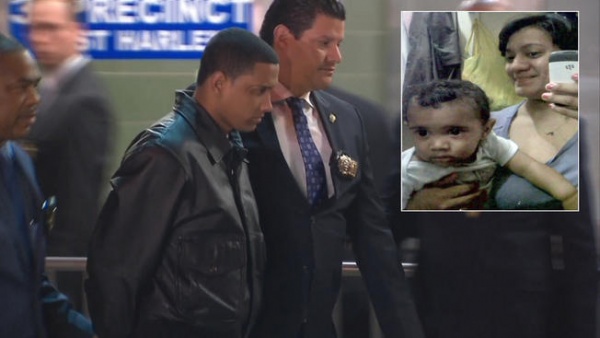 It was a minor tabloid scandal: a Bronx high school teacher caught having a sexual relationship with a student. She was 32. He was in high school, 17 or 18. Soon, they moved in together and she was pregnant. They bought wedding bands.

But they began to argue: about how they would raise their son when he was born; about how the student, though still a minor, drank rum. And as quickly as it had begun, the illicit relationship seemed to be over and they had resumed their separate lives at DeWitt Clinton High School, she as a science teacher, he as a student.

Over the next four years, the woman, now a former teacher — her teaching certification was revoked because of the relationship — attended graduate school and raised their son. The former student, Isaac Duran Infante, paid child support and occasionally visited, but was otherwise kept at a distance.

On Monday, the former teacher, Felicia Barahona, and the boy, Miguel, 4, were found dead in their apartment in Upper Manhattan. By Tuesday, detectives were trying to learn as much about Mr. Duran Infante as possible. And on Tuesday night, the police announced that Mr. Duran Infante, 23, had been charged with two counts of first-degree murder.

The charges against Mr. Duran Infante made for a shocking turn in a story that, until her death, had cast Ms. Barahona as a malefactor or a punch line. Her photograph has appeared in The New York Post and The Daily News in recent years, as the tabloids chronicled a spate of prohibited, and often illegal, student-teacher relationships.

One law enforcement official, who was not authorized to discuss a continuing investigation and spoke on the condition of anonymity, said that Mr. Duran Infante had given detectives a statement, although its contents were not immediately known.

The details of the intimate relationship between the two are laid out in a 2012 memorandum by the office of the special commissioner of investigation for New York City’s schools. It was not immediately clear how closely they had been involved in each other’s lives since then.

Mr. Duran Infante’s family could not immediately be reached for comment. It appears that he lived in the Bronx as well as in Pennsylvania in recent years. On Tuesday, law enforcement officials and relatives of Ms. Barahona offered differing versions of his surname, with some calling him Isaac Duran and others, including the police in the news release announcing the charges, referring to him as Isaac Duran Infante.

Ms. Barahona’s half brother, Jaime Bravo, said she and Mr. Duran Infante argued over how Miguel was being raised. “It was over who gets the kid, how do we figure out what payments are done, if he’s going to pay support or not,” Mr. Bravo said.

According to Mr. Bravo and other relatives, Ms. Barahona had been moving on with her life. “She had a fall from grace and was piecing things back together,” Mr. Bravo said, adding that she was studying forensic science at John Jay College of Criminal Justice and worked there as well.

A more distant relative, who spoke on the condition of anonymity, said Ms. Barahona was quite busy given her involvement with the Coast Guard Reserve, working and studying at John Jay and raising Miguel and a daughter who was around 8.

“It’s horrible,” the relative said, adding, “whatever her transgressions, she certainly didn’t deserve a death sentence.”

“Little Miguel certainly didn’t do anything wrong,” this person said. Mr. Bravo described the boy as “your basic, happy 4-year old,” and a fan of Thomas the Tank Engine who was always reaching for his mother’s phone.

Miguel and his mother were found dead in their West 153rd Street apartment on Monday morning, the police said. Ms. Barahona, 36, was found on the living room floor with an electrical cord wrapped around her neck; Miguel was in the bathtub, the police said.

Julie Bolcer, a spokeswoman for the city’s Office of the Chief Medical Examiner, said in an email that both deaths had been ruled homicides.

The 2012 memo written by school district investigators offers an account of the relationship between Ms. Barahona and Mr. Duran Infante, although his name is redacted and he is identified as Student A in the version obtained by The New York Times. The report indicates that Ms. Barahona had been his teacher.

“Barahona responded that Student A was not going to take the baby anywhere and they argued,” according to the memo.

Before long, they split up, the memo says.

The relationship came to the attention of the authorities in February 2012 based on a tip from someone who had talked to Mr. Duran Infante. When investigators contacted him, he acknowledged that he had “fallen in love” and had had a sexual relationship with Ms. Barahona. He told investigators that she was pregnant.

“He embraced the idea of being a father,” the memo says.