Merry Christmas? Fifty People Were Shot In Chicago This Weekend 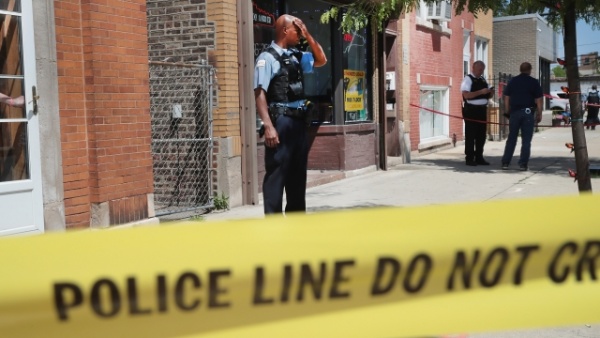 Nine people were wounded in daylight shootings in Chicago early Monday, bringing to more than 50 the number of people shot over the long Christmas weekend.

Eleven of the 53 people shot between about 4:50 p.m. Friday and about the same time Monday died from their wounds. More than a dozen others were listed in serious or critical condition.

Much of the violence happened in areas "with historical gang conflicts on the south and west side of Chicago," said Anthony Guglielmi, a spokesman for the Chicago Police Department.

He also referred to the department's "strategic subject list," which is generated daily from a computerized algorithm and assigns a score from 1 to 500 based on such factors as a person's arrests and the activities of his or her associates. Those people with a score in the upper 200s or higher are considered in danger of being shot or of shooting someone else.

"Ninety percent of those fatally wounded had gang affiliations, criminal histories and were pre-identified by the department's strategic subject algorithm as being a potential suspect or victim of gun violence," Guglielmi said.

The gunfire Monday included a man shot in each leg, a man wounded in the hand and a person shot in the head, authorities said.

Monday’s gunfire came after two brothers were killed and five other people were wounded while playing dice at a family Christmas party late Sunday.

That mass shooting, and the others on Christmas, added to the tolls this year in Chicago, where more than 700 homicides have been recorded and more than 4,000 people have been shot — a level of violence not seen in Chicago since the late 1990s, according to Chicago Tribune and police data.

The holiday weekend began with five teenagers shot within feet of one another. At 3:30 p.m. Friday, a 16-year-old boy was shot; a little more than an hour later, four teenagers were shot on a nearby block. Their conditions had stabilized, officials said Monday.

Guglielmi said most of the shootings were targeted attacks by gangs against potential rivals during holiday gatherings. That brought on retaliatory gun violence. In response, police adjusted their assignments as needed and seized 45 guns from areas with a heavy presence of gangs, Guglielmi said.

"While we have promising leads, this unacceptable level of gun violence demonstrates the clear and present need for policymakers to convene in January and give Chicago the gun sentencing tools against repeat offenders so that we can adequately hold people accountable," he said.