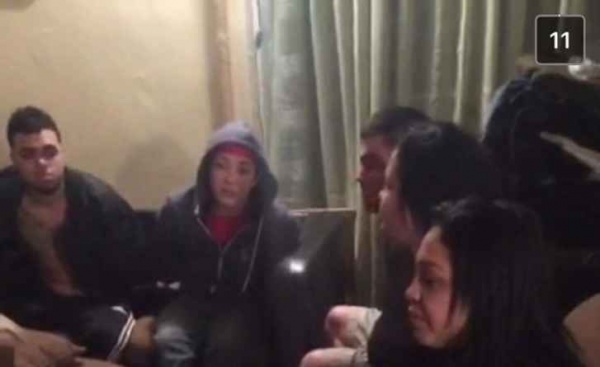 A Brooklyn woman says she became the butt of a yuletide joke after an NYPD officer posted a picture of her handcuffed on social media with the caption, “Merry Christmas, it’s the NYPD."

Kimberly Santiago, 28, said the photo — that was posted on the Snapchat app – shows her relatives being detained as warrant squad cops rummaged through her Dumont Ave. apartment in Brownsville on Thursday morning.

“Oh my God. When I saw that, I just said, man, this whole time this guy was recording this, like we were a joke?” Santiago told the Daily News.

One cop stood watching the group from the door, typing away on his phone, she recalled.

Hours later, a friend sent her another picture posted on the site.

It was another snapshot of the handcuffed family and it read, "Warrant sweeps Its still a party smh,” using an acronym for “shaking my head.”

Santiago said she believed Snapchat circulated the photo as part of its “New York Story" — but a company spokeswoman denied that account on Saturday.

The NYPD confirmed that a warrant was executed at the address, but would not say what or who they were looking for, citing an ongoing investigation.

Police did not identify the officer who posted the photos, but said he works at the 73rd Precinct and has been suspended.