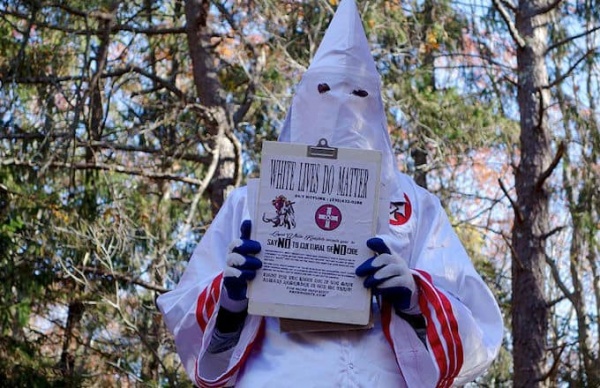 The setup is warm and fuzzy. “Girls, I got y’all some gifts,” says Steven Howard, presenting his two young daughters with prettily wrapped packages, which they eagerly rip into. The cameras then reveal what’s inside: the distinctive pointed hoods of the Ku Klux Klan.

“Giving my girls my legacy,” Mr. Howard says as he helps place them on their heads.

It’s a chilling introduction to “Generation KKK,” an eight-part documentary series, beginning Jan. 10 on A&E, that burrows in with high-ranking Klan members and their families. The series also takes A&E, best known for long-running favorites like “Hoarders” and “Intervention,” into programming waters more complicated — and politically charged — than anything it has shown before.

That meant finding a delicate balance between winning the trust of the Klan members and ensuring the show didn’t propagate views the network’s executives abhor. “We certainly didn’t want the show to be seen as a platform for the views of the KKK,” said Rob Sharenow, general manager of A&E. “The only political agenda is that we really do stand against hate.”

“Generation KKK” began taking shape a year and a half ago — not long before the divisive election campaign emboldened Klan members and other nationalist groups in their belief that they were battling a white genocide — when the filmmaker Aengus James sent crews into the South. The goal: to show the Klan at the unvarnished grass-roots level.

“The struggles we were most drawn to were the struggles with the internal families,” said Mr. James, an executive producer of the series, whose previous credits include TLC’s “I Am Jazz,” about the transgender teenager Jazz Jennings. “We had a stance, and we were clear with folks that we were hoping for them to see the light and to come out of this world. It’s an incredibly destructive environment for anybody to be in, let alone children.”

The series follows Mr. Howard, the Imperial Wizard of the North Mississippi White Knights; Chris Buckley, a Grand Knighthawk with the North Georgia White Knights; and Richard Nichols, the Grand Dragon in the Tennessee Knights of the Invisible Empire.

According to the Southern Poverty Law Center, the number of independent Klan chapters in the United States (there is no national organization) grew from 72 to 190 between 2014 and 2015. The Anti-Defamation League estimates membership at 3,000, while the law center places the figure at between 5,000 and 8,000. And the indoctrination of young people, members say, is crucial to the Klan’s survival.

As they sought to capture this relatively unseen world, the filmmakers also incorporated the anti-hate activists Daryle Lamont Jenkins, Arno Michaelis and Bryon Widner as they tried to persuade members to leave the Klan — or at least to leave their children out of it.

That meant introducing Mr. Buckley’s wife, Melissa, to Mr. Michaelis, a former white supremacist now with Serve 2 Unite, which works with young people to prevent violent extremism. Mr. Buckley’s Klan involvement had led his wife into a dangerous confrontation with three African-American women at a Walmart, and she wanted to squelch her now-5-year-old son’s mimicry of his father’s racial slurs and “white power” salutes before he started school.

“I hate to say that I was even at the point of leaving him, because he’s my best friend, he’s my kids’ father, he’s everything to me,” she said in a phone interview. “But it got to the point where, if I’m not safe with him, why be with him?”

For Mr. Buckley, an Army veteran of Afghanistan and Iraq, the Klan offered a band of brothers not unlike the military and an outlet for the rage he felt toward those he blamed for his emotional and financial precariousness.

“People involved in hate groups do so because they’re suffering,” Mr. Michaelis said. “I really draw upon that truth to respond to their aggression with compassion, and doing so makes a very powerful first impression.”

At A&E, which won an Emmy for “Born This Way,” a docu-series about young adults with Down syndrome, the knotty content of “Generation KKK” prompted soul-searching among executives. But “Generation KKK” did feel of a piece with some of its newer programming priorities.

In November 2015, A&E broadcast “Shining a Light: A Concert for Progress on Race in America” five months after Dylann Roof, a white supremacist, shot and killed nine people in a church in Charleston, S.C.

“I certainly think that A&E should be on the side of shining a light on things that aren’t really looked at,” Mr. Sharenow said. “I wouldn’t go so far as to say we’re an advocacy brand. But I do think there’s a message of hope in all these shows and a promise of redemption.”