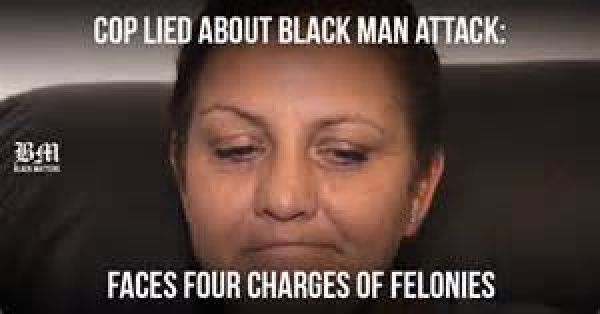 Just after midnight Sept. 13, Officer Sherry Hall radioed for help. She had just been injured in a gun battle with a man in a cul-de-sac in Jackson, Ga. He was 250 pounds, she said, mentally disturbed — and black.

Without warning, Hall said, the man stood up and fired his gun, shooting a round into her bullet-resistant vest. As she took cover, she said, he ran away.

It was, seemingly, another unprovoked attack on a law enforcement officer in a summer full of them. In July, officers were targeted and killed in Dallas. A week later, it happened again in Baton Rouge. The shooters claimed the bloodshed was retaliation for the killing of black men by white law enforcement officers.

Now, people were about to learn there was a cop-shooting black man on the loose in Jackson, a city of 5,000 where 41 percent of the people are black, according to the U.S. census.

Hall stoked the fear during an interview with a local CBS affiliate.

“For him to have such a disregard to human life really angers me and upsets me,” she said amid a manhunt for the man she had described. “If he’ll do this to an officer, how much more will he do to a citizen on the street.”

She was grateful for her training, she told the station, and relieved to make it home to her three children.

The shooting set residents on edge.

Shortly after, though, Hall’s story began to unravel.

During three interviews, she told investigators that she didn’t turn on her patrol cruiser’s dash cam or audio recording device, according to the Georgia Bureau of Investigation.

But investigators pored over the equipment — even reaching out to the manufacturer — and recovered video and audio from a hard drive.

They discovered numerous inconsistencies, including some with the physical evidence in the case.

They interviewed Hall again, pointing out things that didn’t add up.

“During this interview,” a GBI statement said, “Sherry Hall watched the video and at that time Hall stopped cooperating with the investigation.”

The probe shifted focus, from a still-unidentified 250-pound black man to the white officer who said she’d been shot.

Particularly damning: She hadn’t told investigators about a second gun that was issued to her by the Jackson Police Department on July 1.

On Sept. 23, the GBI obtained arrest warrants for Hall. She’s accused of making false statements, tampering with evidence, interfering with government property and violating her oath of office.

Her case is reminiscent of the 2015 death of Lt. Charles Joseph Gliniewicz, a police officer in Fox Lake, Ill. Gliniewicz radioed that he was pursuing three possible suspects. A short time later, he was found dead of a gunshot wound. His case sparked a massive manhunt. But police say the killing was a ruse to cover up a suicide after Gliniewicz stole money from his own police force.

In Jackson, after Hall was charged, officials rushed to assure people that they weren’t in danger.

Mayor Kay Pippin told the people of Jackson that she was disappointed about being duped.

“Our citizens have been made to fear that a shooter was loose in our community,” Pippin said in a speech to citizens that was transcribed and posted on the city’s Facebook page.

“I am disappointed that anyone would cause such fears. For two weeks, the good people of the city of Jackson have poured out their hearts, expressions of concern and their support for what they believed to be a police officer, one of their own, harmed in the line of duty. I share their disappointment in what we now believe to be a ruse.”

Hall had come to the Jackson Police Department from the nearby Griffin Police Department three months before the shooting, Chief James Morgan told AP. Although he had to talk to her about some minor issues, such as being late, other officers had no major complaints, Morgan said.

Before the charges were filed, she voluntarily booked herself into a private facility to seek help and will be arrested and booked into the Butts County jail once she is released from that facility, the AP reported. Her case will be brought before a grand jury, and she could face more charges, Milam said.

And, in an instant, law enforcement officers shifted from trying to find the man who shot Hall to trying to make sure she spends years behind bars.

“People are human and we expect mistakes to be made,” Sheriff Gary Long said in an open letter to the community after the charges were announced. “Officers are human too, but I assure you that this is NO MISTAKE, this is a criminal act that tarnishes every badge worn across the United States of America.”

“As your Sheriff, I pledge that if the accused is found guilty, that I will do everything legally possible and within my authority to see that she has many years in the Georgia Department of Corrections to think about the shame she has brought not only this great, safe community, but to a profession that I cherish and have dedicated my life to.”