Catching A Bomber: How He Was Trapped And Caught 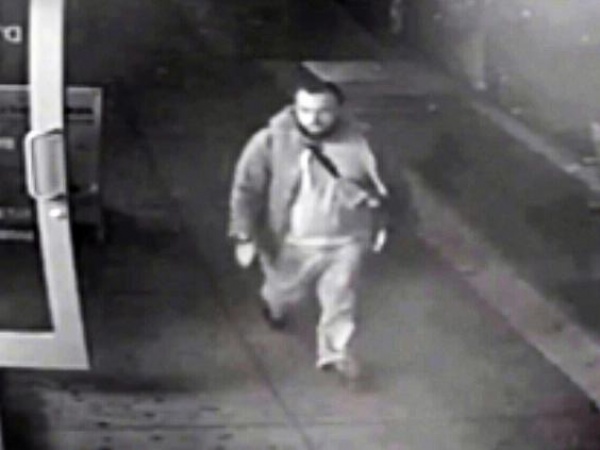 Had the bomber chosen a simple black or solid hued wheeled suitcase, the two men who happened by might not have even noticed it sitting on a dimly lit patch of pavement on the uptown side of West 27th Street.

“They might have just walked right on by,” a high-ranking cop said on Monday.

But the wheelie bag the bomber left had an eye-catching pattern whose multi colors included green and what the cop describes as “I don’t know, maybe puce or something.”

Video surveillance footage later recovered by detectives shows that this out of the ordinary bag clearly aroused the interest of the two men who sauntered over to it. They unzipped it, and one of them stuck an exploring hand inside. They then took out a pressure cooker in a white plastic trash bag, and the two examined it for a few moments. They had their backs to the camera, so it is difficult to determine how they may have fiddled with it, if at all. They then ambled off with the bag, a fine bit of “mungo,” as street finds are sometimes called.

All of this was right around the time a bomb in a pressure cooker exploded on West 23rd Street, four blocks downtown. Police believe that the devices were built and placed by the same person and that the only difference between the two was that the one on West 23rd Street detonated, and the one on West 27th Street did not. The logical conclusion is that when removing the pressure cooker, the two men on West 27th Street may very well have dislodged a connection between the explosive charge and the cellphone that was supposed to trigger it.

The bomber had left the West 27th Street device directly across from a partly outdoor, open front restaurant and bar at the Innside hotel, where the crowd eats and drinks under a plate glass ceiling with the plate glass face of the hotel rising behind them. Dozens could have been killed if the device detonated as had its twin downtown. The twin was placed either in or by a dumpster that partly contained its blast, and nobody was killed, though 29 people were injured.

An hour and a half after the blast on West 23rd Street, a travel photographer named Jane Schreibman stepped from her residence just up the block from where the bomber had left the distinct bag and the two mungo men had then taken it, leaving its contents. She had not heard the blast downtown and only learned of it when a friend called to inquire if she was all right. She now emerged and saw the pressure cooker sitting on the sidewalk. Wires were protruding from it and running to some kind of rectangular object wrapped in duct tape.

“I thought it was a child’s science project,” she would recall.

She proceeded downtown to see the scene and got as far as the police barricades, where she spoke with friends about the bombing. She then recalled all those public service ads urging you to say something if you see something.

Schreibman returned to her home and called 911. A New York state police sergeant and a trooper who were out joining a hunt for secondary devices arrived minutes later. She would remember them shouting a word.

The bomb squad was soon there and began a ritual for which they train constantly. The routine would have been to examine the device with a Golden portable x-ray generator and use a robot to place it in a spherical Total Containment Vessel mounted on a trailer. It was then transported to the NYPD facility at Rodman’s Neck in the Bronx.

At both the scene of the blast—where hundreds of thousands of bits of evidence described as “large and very, very small” were collected—and at Rodman’s Neck, the NYPD and FBI technicians worked together with the kind of cooperation that should have always been the norm. A forensics investigator found a fingerprint on one of the parts of the intact pressure cooker, a clue that would not likely have been there if the device had detonated.

The fingerprint allegedly belonged to 28-year-old Ahmad Khan Rahami of New Jersey. Surveillance videos recovered by detectives in an ever widening canvass around the blast site produced a man closely resembling Rahami toting a backpack and pulling that wheeled suitcase. Investigators identified a number of vehicles associated with him, one of which had been recorded by license plate readers as traveling in and out of Manhattan on the day of the blast. The area where the devices were planted is one spot in Manhattan where a driver can find street parking on the weekend.

“It all wove together,” a senior law enforcement official said.

The Joint Terrorist Task Force had the car under surveillance when a number of men and women climbed into it and headed from New Jersey to Staten Island, then over the Verrazano Bridge into Brooklyn. The investigators had not been able to determine if Rahami was aboard, but the car was taking the same route as it would if it were headed for Kennedy Airport, which raised the possibility of flight or an attack.

The investigators pulled over the car on the Belt Parkway. Rahami was not among the passengers, who included several of his relatives, none of whom are said to have been belligerent or less than cooperative with the investigators.

“They all seemed to be really nice people,” the senior law enforcement official said.

But the investigators were obliged to keep the car as evidence on the possibility that it had been used to transport not just the two pressure cooker devices but a number of pipe bombs that had been found in New Jersey. Three of those had been planted along the route of a Marine Semper Fi 5K run on Saturday morning, though only one had detonated and thankfully failed to hurt anybody because the event was delayed.

Five more bombs had been discovered by two homeless men in a New Jersey train station on Sunday. The bombs had been left in a trash bin in an ordinary black backpack. The homeless men had apparently been attracted not by the bag but by the possibility it might contain something of value. They called police after seeing the wires inside.

In the meantime, investigators had determined that the rectangular object attached to the intact pressure cooker device was a cellphone. The serial number had led to the point of purchase, a Family Dollar store in Perth Amboy, New Jersey. That proved to be the same point of purchase as cellphones discovered along with the pipe bombs.

“The weave got tighter and tighter,” the senior law enforcement official said.

On Monday morning, the authorities released Rahami’s photo to the news media and over a cellphone emergency alert system, warning that he should be considered armed and extremely dangerous. He proved this right after a passer-by saw him sleeping in the doorstep of a closed tavern in Linden, New Jersey, and wondered if this could be the most wanted man in America. The man tried to rouse the sleeping figure.

“F--k off!” the figure reportedly growled.

The man called 911. The Linden police responded, and Rahami is said to have opened fire. He hit two officers, who were saved from serious injury by their bulletproof vests. Rahami was shot and transported to the same hospital where the officers were examined. He was expected to survive.

In New York, the new police commissioner, Jimmy O’Neill, held a press conference. He had officially assumed his new title on Friday night and had just moved his things into his new office on Saturday when he was notified of the bombing. He now stood with a poster-size photo of Rahami that had a word emblazoned across it.

The investigators believe that Rahami built and planted all the bombs on his own. None of the surveillance videos show the bomber working with anybody else.

“Always by himself,” the senior law enforcement official said. “Nobody drove with him or dropped him off.”

And on Monday police were saying they are not looking for any other suspects at this time.

But investigators do note that Rahami had traveled on a number of occasions back to his native Afghanistan and to Pakistan. He married a Pakistani woman on one visit, but there were also other trips.

“Which raises the question of what did he do,” the senior law enforcement official said.

Investigators also noted that Rahami has little of the social media involvement typical of those with links to Islamic terrorism. That caused one police official to wonder aloud if perhaps Rahami had been advised during a trip to Afghanistan or Pakistan that Facebook and Twitter and the rest can be a liability for a jihadi.

“It’s possible they told him to get rid of it,” the senior law enforcement official said.

If Rahami was coached on how to build bombs, he seems not to have had much of an instructor. He certainly was not much of a student. Only two of his 10 devices exploded.

The site of the pressure cooker bomb that did explode was still closed off by police on Monday night. Four TV news trucks were parked at the end of the block.

Already forgotten was the site four blocks uptown where the bomb may very well have been inadvertently disabled by two mungo men who fancied the bomber’s distinctive wheelie bag. A measure of what might have been came when you gazed directly across the street to where people in the open air hotel restaurant were eating and drinking and laughing under a glass ceiling that could have killed everybody there had the bomber gone for a more ordinary black or single-hued bag.

The investigators are interested in speaking to the two fancy bag aficionados, and on Monday they were going through the area showing a video still of the pair, who appear to be in their thirties. Investigators were reluctant to release this picture to the public.

Of the prospect that the two mungo men deliberately fiddled with the device, the senior law enforcement official said, “They would be the two dumbest and the two luckiest guys in the world at the same time.”