Police Kill Black Man While His Hands Are 'In The Air' 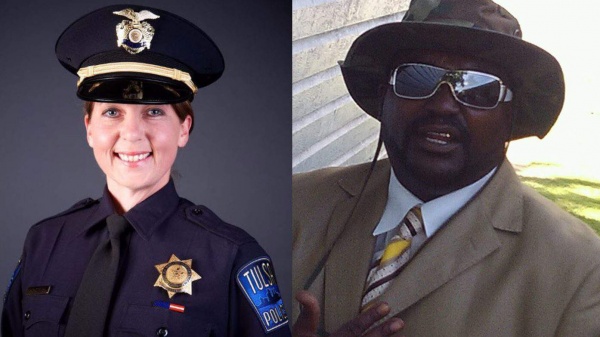 A 40-year-old black man who was fatally shot by a Tulsa police officer had his hands up and appeared unarmed when one officer Tasered him and another fired at him, according to a local pastor who reviewed footage of the incident Sunday.

The department hasn’t commented publicly on the video or said whether police recovered a weapon from the scene.

Terence Crutcher died in the hospital Friday evening after being shot once, Tulsa police told the Associated Press. Police said two officers found Crutcher standing by his SUV, which had broken down in the middle of the road.

As Crutcher approached the officers, he refused commands to raise his hands and instead reached into the vehicle, AP reported police saying. At that point, one officer fired a Taser and another fired a round, police told AP.

But footage from both officers’ dashboard cameras, as well as footage from a police helicopter, tells a different story, according to Rodney Goss, a pastor at the Morning Star Baptist Church in north Tulsa, who spoke to the Tulsa World.

Goss said police let him review all three videos Sunday, along with members of Crutcher’s family, local activists and community leaders. The department is expected to release the videos to the public Monday.

Footage from the scene didn’t show Crutcher reaching into the vehicle at all, only walking toward it, Goss told the World.

“His hands were in the air from all views,” Goss said. “It was not apparent at any angle from any point that he lunged, came toward, aggressively attacked, or made any sudden movements that would have been considered a threat or life-threatening toward the officer.”

Goss added that Crutcher didn’t appear to have a weapon. The footage, he said, shows Crutcher walking toward officers and appearing to ask for help. When he turned toward his SUV, one officer deployed a Taser on him and the other almost instantly shot him, Goss said.

“It wasn’t a matter of minutes, it was a matter of moments,” he said. “As quick as the officer released the Taser from his hand, Terence was falling to the ground having already been shot.”

Crutcher’s twin sister, Tiffany Crutcher, has insisted her brother didn’t have a gun.

“One fact I do know is that my brother was unarmed,” she said in a news conference Saturday. “I’m just devastated.”

Goss said he also reviewed audio from the shooting. He said officers in the helicopter can be heard saying Crutcher looked like “one bad dude,” but also saying his hands were raised, according to the World.

Crutcher’s sister and the family attorney, Damario Soloman-Simmons, said Crutcher was driving home from classes at Tulsa Community College when his SUV stalled. Police were responding to another call when they encountered him, the attorney told the World. Family members said he had four children and was enrolled in a music appreciation class at the college.

Police are expected to release video and audio from the shooting Monday at 1:30 local time.

“We wanted them to see it before it was released so they wouldn’t be blindsided by it,” Tulsa Police Sgt. Shane Tuell told the World. “We wanted to be able to have that intimate time with them, with their attorney, to see if they had any questions or concerns.”

On Sunday, police released the names of the officers involved. Officer Betty Shelby, who has been with the force since 2011, fired her duty weapon, and Officer Tyler Turnbough, who was hired in 2009, deployed his Taser, the World reported. Both officers were placed on administrative leave with pay, which is customary.

Two state lawmakers, local ministers and local NAACP president Pleas Thompson also saw the videos, according to the World. Thompson didn’t comment in detail on the footage but said he expected the public response to be “level-headed.”

“I think the justice system will work here in Tulsa,” he said, “because we’ve seen it work before.”