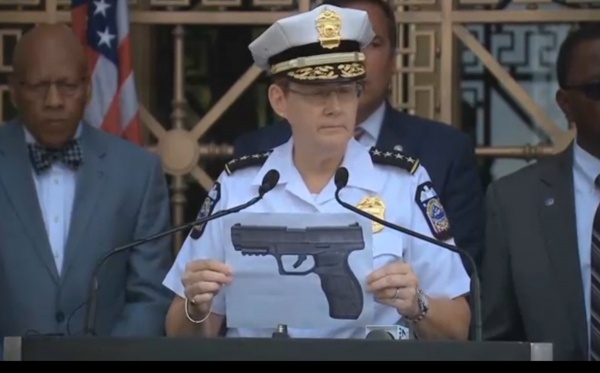 The Columbus police said that officers were called about an armed robbery just after 7:40 p.m. Wednesday. When they arrived, the alleged robbery victim told officers that a group of people — one carrying what appeared to be a gun — demanded money, according to the police.

Officers then saw three people who matched the descriptions given and approached them. Two ran away, and the officers followed them into an alley and went to take them into custody, police said. At that point, “one suspect pulled a gun from his waistband,” police officials said, and was shot by an officer.

King was brought to a Columbus hospital and pronounced dead at 8:22 p.m. The officer, who has not been publicly identified, was not injured, police said.

Officials said the other person with King, who was not identified and was not injured, was interviewed and released. Police say they are still seeking additional suspects.

The shooting in Ohio’s capital city comes amid intense scrutiny nationwide on how officers use deadly force, an issue that prompted protests in Columbus this summer and roiled other cities in the state in recent years.

In addition to Columbus, a city with 850,000 residents, there have been high-profile police shootings in Cleveland and Cincinnati, Ohio’s other biggest cities.

Police did not immediately release King’s race or the race of the officer who shot him.

In June, just weeks before deadly shootings by and of police in Louisiana, Texas and Minnesota, groups gathered at a Columbus courthouse to protest a fatal shooting involving a 23-year-old. These demonstrators called for independent prosecutors to investigate deadly police shootings.

Groups in Columbus continued to rally in July, after the issue of violence involving police was pushed back into the national consciousness after officers fatally shot African American men in Baton Rouge and near St. Paul, Minn., and a gunman killed five Dallas police officers.

In Columbus, police shootings are generally deemed to be justified. A review by the Columbus Dispatch found that since 2004, the city’s police have been involved in more than 170 shootings, and nearly all were deemed to be within the department’s policy guidelines.

King’s death in Columbus comes nearly two years after a Cleveland police officer shot and killed Tamir Rice, a 12-year-old who was holding a toy gun. (Someone had called 911 to report “a guy with a pistol.” This caller said the gun may have been fake, but the officers who responded were not told that.)

A grand jury declined to indict the officers involved last year. In announcing the decision, Timothy J. McGinty, the Cuyahoga County prosecutor, said that Rice was reaching for the toy in his waistband and described it as “indistinguishable” from a real gun.

“The death of Tamir Rice was an absolute tragedy,” McGinty said at the time. “But it was not, by the law that binds us, a crime.”

Cleveland agreed this year to pay $6 million to settle a lawsuit filed by Rice’s relatives.

Toy guns or reproductions can often appear indistinguishable from real weapons, and in shootings that involve such fake weapons, officers often say they could not tell the guns were not real. This issue has prompted fears from parents over what happens if their children are seen with the toys and viewed as armed.

Police have shot and killed dozens of people holding what turned out to be toy guns, with at least 60 such deadly shootings since the start of 2015, according to The Post’s database.

This year, that list has included Kionte Desean Spencer, an 18-year-old who was shot by Roanoke County police officers while holding a broken BB gun that officers say looked real, and Robert Dentmond, a 16-year-old in Gainesville, Fla., holding a toy gun that resembled an assault rifle. In April, a 13-year-old boy in Baltimore who ran from police carrying a BB gun was shot and injured.

“I put my own eyes on it,” Baltimore Police Commissioner Kevin Davis said at the time. “It’s an absolute, identical replica semiautomatic pistol. Those police officers had no way of knowing that it was not an actual firearm.”