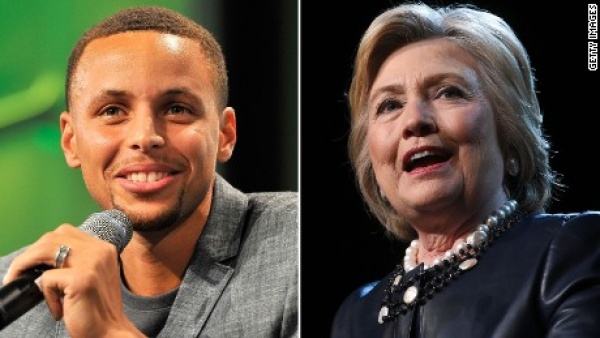 Two-time NBA MVP Steph Curry said he backs Hillary Clinton for president and that he'll "most likely" stand for the national anthem during the NBA season, though he supports Colin Kaepernick's ongoing protest.

The basketball star traveled into political territory during a question-and-answer session Tuesday night at TechCrunch in San Francisco, according to the Mercury News.

Asked who he would support in the 2016 election, Clinton of Trump, Curry had a one-word answer: "Hillary."

And Curry -- who starts for the Golden State Warriors near the same city that hosts Kaepernick's NFL team, the San Francisco 49ers -- was also asked about Kaepernick's decision to kneel during the national anthem at football games. Curry said he's supportive of Kaepernick and respects his motivations, but plans to stand.

"I'll most likely stand. If you follow the way he talks and the message he's trying to send with his act, from his mouth, he's not disrespecting veterans. He's not disrespecting military. That's not his intention. He's obviously continued the act to create a conversation for more social justice and things of that nature," Curry said, according to the Mercury News' report.

He continued, "I've been a part of certain conversations off the grid, and finding different ways to make our community better, especially for African Americans. And so, that's not the way that I would do it, but I support him in his attempt to start a conversation or continue the conversation."

Warriors beat writer for the Mercury News Anthony Slater shared video on Twitter of Curry's answer:
Curry doesn't have a reputation as politically outspoken athlete, but he's famously chummy with the first couple. He's golfed with the President before, and Curry and his wife, Ayesha, partnered with Michelle Obama to promote her health-conscious initiative, "Let's Move."

Curry also appeared with the First Lady on "Ellen" on Tuesday, where they joked about the President's trash talk on the golf course.