What Republicans Have To Do To Win Back Black Voters? 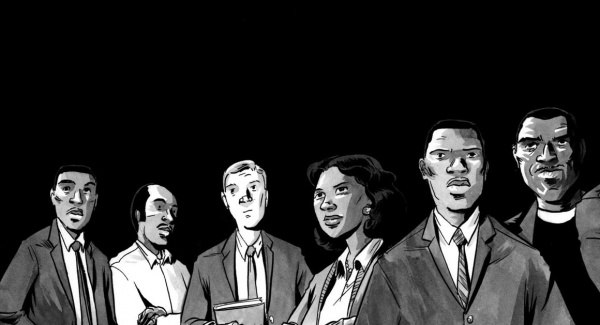 I have an aunt, now in her 70s, who announced to the entire family during a holiday dinner that she would “slap the shit out of” anyone who voted Republican. The level of distrust between black voters and the GOP is that deep, maybe deeper than that between communities of color and the police. No one interested in bridging this divide should pretend otherwise. A few timely ads or going to a conservative black church, as Donald Trump seems to be planning, or co-opting the arguments made by black activists who sincerely want to see more progress won’t be enough.

But when the GOP is finally ready to cut through the bull and Trump’s phony outreach to black voters is over the Republican Party will still have to answer a basic question, one in which it doesn’t seem all that interested in: Which policy (or policies) are its political leaders willing to modify or forfeit to attract a large enough share of the black vote that it will keep the GOP nationally competitive well into the 21st century despite the ongoing demographic shifts in the country?

Strengthening the Voting Rights Act—when George W. Bush signed a reauthorization of the law in 2006 not a single Republican senator voted against it—would be a good place to start. Another would be rethinking how Republicans talk about maladies in the black community and how they would be willing to provide genuine help.

Granted, Trump and his open bigotry ascending to the top of the party have done enormous harm to the cause and might reverberate for the next couple of decades.

Granted, the GOP’s image among black voters is so dismal it might take a mini-miracle for black voters to even consider that the outreach might be genuine, no matter how sincere Republicans are. Nor does it matter if that message is being spoken by young, genuine conservative black men and women—and certainly not when it comes in the guise of a pastor who tweets images of Hillary Clinton in blackface or black conservative pundits who arrogantly claim those who don’t view the world as they do are on a “Democratic plantation.”

Let’s get a few things straight. You won’t be able to win over black voters by simply explaining the benefits of conservatism better, or reminding black voters that Frederick Douglass, like Abraham Lincoln, was a Republican, or that a sizable percentage of the party voted for the Civil Rights Act in the 1960s and that the late Democratic Senate Majority Leader Robert Byrd was a member of the Ku Klux Klan when he was a young man, while neglecting to remind listeners he spent the rest of his life apologizing and trying to make up for that misstep.

In the minds of black voters, the GOP is hostile to health reform that is saving and improving their lives; hostile to Wall Street regulations designed to prevent a repeat of an economic downturn the American Civil Liberties Union calculates will be costing black Americans dearly for maybe another decade and a half; hostile to economic initiatives by the nation’s first black president; and pretend not to hear when communities of color scream that one of the most vital solutions to curbing gun violence is doing something about the guns themselves. When black people bring up any of these issues to many conservatives, they are either ridiculed, told that what they are experiencing can’t really be so, or that a simple adoption of conservative values and principles—whatever that means in the age of Trump—is the elixir for black people’s ills.

That doesn’t even include the Republican push for voter ID laws that affect people of color, the elderly and the poor more than others, and the reality that many Republican and conservative leaders are more concerned with staying in the good graces of the police than they are in solving one of the most vexing, emotional problems facing the nation, that of a perverse combination of under- and over-policing in our most needy neighborhoods.

Which brings me back to my original question. After the smoke clears and the 2016 presidential election is in the rearview, which policy (or policies) will the GOP be willing to modify or forfeit in order to attract more black voters?

Here are a few they should consider, which won’t undercut conservative principles if the party is wise enough to get beyond superficial rhetoric and willing to no longer be beholden to its most extreme wing:

1.) Shut up about black crime and the black out-of-wedlock birth rate. Every time a Republican brings up those issues, usually to deflect from the very real issue of police brutality or to excuse a George Zimmerman killing a Trayvon Martin, it further cements the party’s image that it is willing to use a particular image of black life as a political football first and foremost, if not exclusively.

2.) Persuade most, if not all, Republican elected officials to go on the kind of listening tour Paul Ryan took a few years ago. Ryan stopped using the damaging “makers vs. takers” rhetoric he had become known for through the 2012 election cycle and went to where the black people are and did something novel: listened. He didn’t go to sell conservatism or tell black people how they should live. He interacted with the folks who have been on the ground trying to solve some of the community’s most complex, intractable problems. And it can’t be done just during an election cycle or in front of cameras. It has to be a continuous commitment, even when they are not received warmly.

3.) Once that listening tour is complete—though it never should officially end—announce programs and policies that were born during the tour, created through a true collaboration of the Republican and those in the communities he listened to.

4.) Channel the John McCain of 2008, when he shut down a Republican at one of his presidential rallies who tried to spread rumors about Barack Obama’s ethnicity and loyalty to America. It cannot be stressed enough how much of a hit the Republican brand took in the eyes of black Americans when so many top officials either excused or looked the other way when Trump and others were pushing the racist birther claim.

5.) Understand why your embrace of some prominent black conservatives—the sheriff in Milwaukee, Ben Carson, the South Carolina pastor who tweeted an image of Hillary Clinton in blackface, Herman Cain, etc.—is making your job harder, not easier. If they could help you effectively reach a broader black audience, the black vote total you’d be receiving would already be in the double-digits. They simply underscore the belief that you are OK with black people as long as they make you comfortable and say only what you already want to believe about black people. They are a barrier to your long-term goal, not a bridge.

6.) You have to be willing to swallow your pride and shift on an important policy or two. A few possibilities: bucking the NRA and adopting legitimate gun control that doesn’t undermine the Second Amendment, which many Republicans favor any way; having Congress modify the Affordable Care Act to improve rather than destroy it, as well as persuading more Republican governors to adopt the Medicaid expansion; stopping the push for restrictive voter ID laws or sit down with Democrats to find a real compromise on the issue so the black and poor won’t feel you are trying to turn the clock back to the days of the literacy test and grandfather clauses.

The truth is that the GOP has dug itself an enormously deep hole with black people, who had been voting for Republicans in fairly large numbers until Barry Goldwater happened. The party has to commit to changing its image and consider policies that are attractive to black voters that remain within the boundaries of traditional conservative thought. There is already the fertile ground of criminal justice reform the party can build upon. It’s doable.

But until the GOP is willing to commit to that process—a yearslong one—it shouldn’t expect black voters to jump ship to them because, unlike what Trump is selling, black voters know that while more progress must be made, they do, in fact, have a lot to lose by embracing a Republican Party unwilling to embrace them first.