A Brief Reminder Of Why Blacks Switched From Republican To Democrat 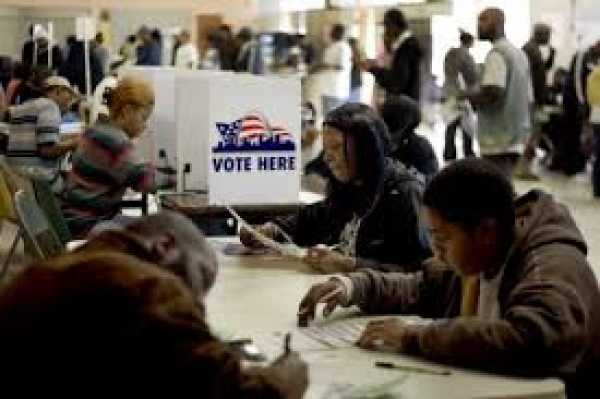 Call to mind Ed Brooke,the D.C.-born late U.S. senator from Massachusetts. Think of abolitionist, orator and author Frederick Douglass, and civil rights leader James Farmer. The three were separated by occupation, and in Douglass’s case, generations. But they had two things in common: Each was an African American, and each was a Republican.

Now consider the Rev. Mark Burns, the black Republican televangelist from South Carolina who pops up from time to time on cable news as a leading Donald Trump surrogate.

Brooke was the nation’s first popularly elected black senator. Douglass, a champion of the anti-slavery movement. Farmer, a civil rights pioneer and architect of the Freedom Ride of 1961.

Burns’s current claim to fame? The cartoon he tweeted this week depicting Hillary Clinton in blackface and saying “I ain’t no ways tired of pandering to African Americans” while holding a sign reading “#@!* the police.”

Brooke, Douglass and Farmer have gone off to glory, along with other black Republicans who earned their prominence in different endeavors, such as James Weldon Johnson, poet, educator, organizer for the NAACP and songwriter (“Lift Every Voice and Sing”). It’s not possible to know exactly what they would think of Burns, who has been profiled by Time as “Donald Trump’s top pastor.”

Burns, for sure, is an unusual man of the cloth.

Given the chance to speak at the GOP national convention in Cleveland in July, Burns addressed the question of why Clinton should be locked up: because she’s the “enemy,” he proclaimed. Said the cleric to the conventioneers, “Our enemy is not other Republicans but is Hillary Clinton and the Democratic Party.”

This is the same Burns who told Trump rallygoers in North Carolina that Democratic candidate Bernie Sanders did not believe in God. “Bernie got to get saved, he has to meet Jesus, he got to have a come to Jesus meeting,” preached Burns.

After catching heat, Burns apologized for the blackface cartoon. Well, sort of. He deleted the tweet, which he acknowledged might have been offensive, but then defended the message he sought to convey, namely that Clinton panders after black people.

Oh, how I wish I could hear what Brooke, Douglass and Farmer would have to say about Burns and the current Republican Party — a GOP that is whiter today than it was only 20 years ago.

It seems worth noting that as the Republican Party has staged a retreat on inclusiveness, black Republicans of Burns’s ilk seem to have advanced to the forefront.

Time was Douglass and Johnson had plenty of black company in the Republican Party founded by the Great Emancipator Abraham Lincoln. The Democratic Party of their time was home to the pro-slavery and later pro-segregation crowd.

The line being pushed by Trump’s black surrogates that black people are unthinking sheep historically led by white Democratic shepherds is pure rot.

A combination of trends reversed the racial and political dynamics of 20th-century black America.

As Musa al-Gharbi wrote in his American Conservative piece “Why Aren’t There More Black Republicans?,” Franklin Delano Roosevelt’s New Deal had something to do with black migration to the Democratic Party. So too, President Harry Truman’s executive orders eliminating segregation in the armed forces and ending racial discrimination in federal employment. Lyndon Johnson’s Civil Rights Act of 1964 and Voting Rights Act of 1965 and his appointment of Thurgood Marshall to the Supreme Court helped foster allegiance to the Democratic Party.

But then again, blacks also got a push to the door from Republicans.

Richard Nixon’s play for Southern white voters, pandering to their racial hostility and fears (the “Southern strategy”), told blacks voters that the Republican base would wear a white face.

Nixon’s embrace of South Carolina’s rock-ribbed segregationist Democratic-turned-Republican senator Strom Thurmond was the last straw for baseball great and staunch black Republican Jackie Robinson. In 1968, after Nixon won the nomination, Robinson switched his affiliation to independent. Accusing Nixon of “selling his soul,” Robinson asked in an August 1968 column how anyone could trust a man who “would aspire to the White House by doing business with bigotry.”

And it certainly doesn’t help draw blacks to the GOP when Republicans tout voter-ID laws that disenfranchise minority voters, back the “birther” movement that challenged the legitimacy of President Obama and suggest blacks want nothing but a never-ending ride on the federal gravy train.

As it stands, that’s making it all but impossible for the few remaining black Republicans to hold on to their registration. (I happen to be married to one.)

Perhaps that explains the ascendancy of the Rev. Mark Burns, the present-day GOP and Donald Trump’s kind of black Republican.