After 12 Years Of Incarceration, Man Starts A Successful Publishing Company 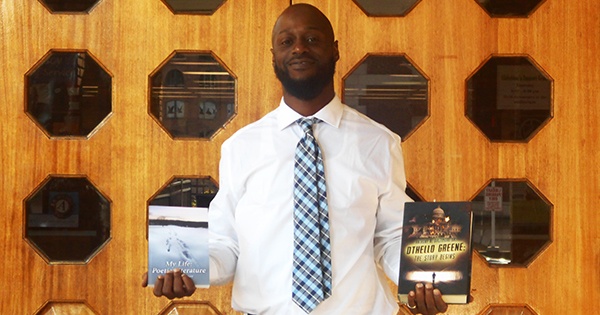 Justin Daugherty spent 12 years behind bars, but he has always believed that he committed the offenses leading up to his conviction because of a lack of job opportunities and lack of guidance. For that reason, in 2015 he launched JourStarr Quality Publications, LLC (www.jourstarr.com), a small, independent press that offers second chances. JourStarr publishes quality works in the genres of fiction, poetry, creative nonfiction, and even photo journals, offering talented writers an opportunity to be published, whether they are free or incarcerated.

“I spent the better half of my adult years behind bars. I was about 18 years old when I was arrested,” Justin says. “Around that time, there was the ‘Weed and Seed Initiative’ that led to an increase in racial profiling by law enforcement in my area. That, and a series of bad decisions, led to my incarceration. But I knew my story didn’t have to end there.”
Since his release, Justin had been working in demolition and welding for the Honda Line at Yorozu Automotive, located in Tennessee. He has also been attending West Virginia Northern Community College for coursework in Small Business administration, and has been serving as director of an early-stage non-profit aimed to curb youth incarceration and drug abuse by promoting literacy and encouraging creative writing.

Justin has also been painstakingly sifting through manuscript after manuscript in search of quality material. “My goal for the future of the company is to consistently provide groundbreaking material. Right now, we have a lineup of authors whose real lives are just as compelling as the tales they write. We plan for JourStarr to be around for the long haul, offering an opportunity for talented writers to have their works showcased properly. We stand firm in, helping all talented writers pursue their dreams, including ex-offenders, because everyone deserves a second chance.”

Justin founded JourStarr Quality Publications, LLC in 2015, after having spent 12 years behind bars. He has always believed had he received guidance from those who would have been a positive influence, things might have been different. For that reason, he decided to be a positive influence. While behind bars, he focused on ways to change things for himself and others. Justin completed a number of business courses and became certified to teach adult literacy through Bluefield State College. Upon his release, he immediately volunteered to speak to incarcerated youth, advocating for literacy since 2011. His hope has been to reach endangered youth before they find themselves ensnared by trappings of street life.

Born in Washington D.C., Charles Leon Fantroy, Jr., found himself incarcerated in the Federal Penitentiary system at age seventeen, but he also found a way to express himself. He practiced writing and honed his skills behind the walls of USP Leavenworth. Through an 18-month program offered by Stratford University, Charles became a certified internet specialist. Now at age thirty-six, he is finally able to pursue his true passion—publishing collections of poetry, novels, as well as completing scripts for full-length feature films. Charles Leon Fantroy, Jr. is expected to be released from prison in the very near future and hopes for a bright future in writing upon his return to society. His collection of poetry is entitled, My Life: Poetic Literature. Rhythmic and inspiring, this collection of poetry urges readers to center themselves, find peace and use their own inner voice as a source of strength and guidance.

In 2009, of the over 22,000 convicted of federal drug charges, less than 25 of those individuals were convicted of 21 U.S.C. § 848, more commonly known as ‘the Kingpin Statute’. Anthony H. Baltimore, Sr. was one of them. Born in Washington D.C. in 1969, Anthony H. graduated from Mackin Catholic High School, and went on to attend Howard University. Still young, he soon became a successful entrepreneur, but enticed by illusions of power and prominence, Anthony fell prey to the lure of drug trafficking. He is currently serving a mandatory life sentence at USP Lewisburg in Central Pennsylvania. A devout Muslim, he is a loving father and makes use of his time by furthering his education, fostering his passion for writing, and advocating for an appeal. Anthony H. Baltimore, Sr. is author of Othello Greene: The Story Begins.