The Worst Thing About Youth Sports Is The Parents 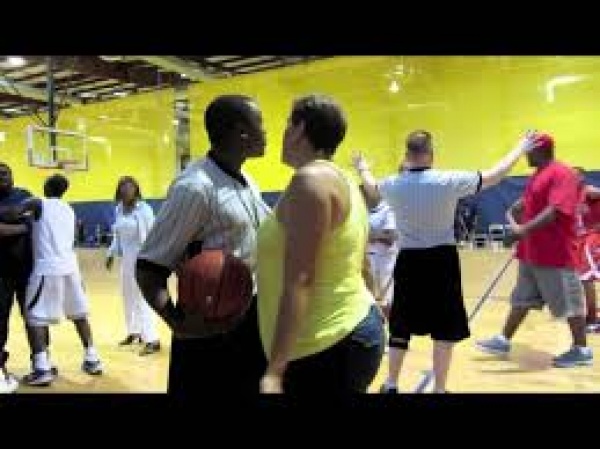 While other families traveled, partied and picnicked, our Memorial Day Weekend was taken up almost entirely by a lacrosse tournament, and I was reminded once again of the inverse relationship between parents who are good and decent and parents who really, really care about their kids’ sports teams.

I see this every year with each sport my son plays, and it never ceases to blow my mind.

Most of our sports shuttling and spectating revolves around our youngest boy. Our youngest is one of those kids who is unusually gifted athletically and excels at any sport he attempts – and he attempts a bunch of them. (Given the combined athletic talent of his parents and grandparents, we attribute this to some highly recessive gene that lay deeply, deeply hidden in his mother and I.) All of this translates to a lot of kid sports throughout the year. Soccer, basketball and lacrosse dominate our falls, winters and springs, and the summer is filled with sports camps and individual training. Because of his skill level, our youngest is usually on at least two teams at any given time – one of the “regular” teams that feeds into our neighborhood high school, and the “select” teams that rope in the best of those teams to play the best players feeding into other high schools. He’s also in high demand for other rec leagues, and so on those rare occasions where he does not have a practice or game with one of his two teams he’ll often “sub” for other teams. The complex, byzantine carpooling arrangements we make with other parents isn’t just nice, it’s a necessity.

So I know of what I speak when I say that the more emotionally involved parents get in kid sports, the more they seem to be terrible human beings.

Over the years I have seen parents scream at the top of their lungs, and I have heard them shout obscenities. I have witnessed them taunting young, lesser skilled children on opposing teams, as well as attempting to physically intimidate teenage referees. Once, I watched as a father smacked his own son as the boy was coming off the mat at a wrestling tournament, for the crime of being pinned by a girl who outweighed him by twenty pounds. And on more than one occasion, I have cringed as especially zealous parents cheered young children being hurt so badly on the field that they needed to be taken away to the hospital.

Mind you, most parents I see are really great. These parents are supportive of their own kids’ efforts, win or lose – and they even clap at great plays made by the other team. They never “boo.” They cheer especially loudly when those kids on the team with lesser skills have a good game; they certainly never yell at the coach to take those weaker players out of the game. Still, even though they’re in the minority it’s those other, terrible parents that stand out.

Over the years, I’ve made some observations about the phenomenon of the terrible sports parent. It is, as far as I know, the only such amateur anthropological study of this American subculture. I present my findings here in no particular order:

1) Bad sports parents are almost never lone wolfs; instead they tend to run in packs. About one out of every five or six kids’ sports teams has a group of parents who are all terrible sports parents – both as individuals and as a group. It’s almost never just a few people; it’s almost always all of the parents of a particular team.

2) In almost every case I have seen, the coach of these teams is as bad or worse than the parents on the sideline. Yelling at players out of anger usually starts with the first whistle and continues until the last; so, too, does yelling at the refs. I cannot say for certain if the parents pick up on the coach’s poor behavior and mimic it, or if boorish coaches are just chosen by boorish parents. Chicken and egg, best I can tell.

3) Bad sports parents like to win, and because of this they gravitate toward really strong teams. I have never seen a poor or mediocre team backed by terrible parents. However, it should be noted that not all strong teams have bad parents. So the relationship between winning and being an obnoxious parent is by no means a causal one.

4) Teams that draw bad sports parents tend to draw a lot of them. One of the best ways to identify a group of parents that will behave childishly once the game starts is by their sheer number. In many cases, the number of parents, grandparents, siblings, uncles and aunts who show up to cheer on bad sports parent teams will outnumber the opposing parents and the players on both teams combined.

5) Another good clue: Bad sports parents tend to live for being bad sports parents. And so when you arrive at your kid’s game and the opposing side’s bleachers is made up of adults wearing knock-offs of the team uniform (and tiny siblings having been dressed similarly by those same adults), it’s a pretty good sign that you’re in for some teeth gritting.

6) There does not seem to be a socio-economic relationship between bad sports parent teams. They can come from poor working class neighborhoods and privilege alike. Likewise, they come from all types of religious, political and cultural backgrounds. In my experience, however, they are always all-white – but I suspect this varies based on your location. Portland is a fairly white city, so I would guess parents of minority-dominated teams here feel like that’s a kind of PR they just don’t need. I suspect in most communities bad sports parents are usually made up of the dominant groups, whatever they may be.

7) The behavior of the parents rubs off on the kids, but this seems to happen over time. At ages 8-11, kids on bad sports parent teams cringe when their parents shout and act up. As they get older, however, these same kids will be the ones who will feel free to mouth off to the refs while on the field. By 13 and 14, these players seem to look for opportunities to hurt opposing players.

8) Once the game is over, bad sports parents whose team has won instantly transform back into self-respecting adults; they gather their things and their family and exit in a courteous manner. If their team loses, however, continued childlike behavior ensues. You have a sense that the men in particular are kind of hoping things might come to blows with the other team’s fathers.

Is there a cure for this phenomenon? If so, I have yet to find it. Pulling one of them aside and suggesting better behavior always results in the opposite reaction. Other parents’ leading by example is ignored. Responding with similar obnoxious behavior just seems to throw fuel on the fire.

At my son’s tournament this weekend, we were lucky enough to encounter only one bad sports parent team; we were unlucky enough that they were the worst group of parents I have encountered in years.

The team name was The Maniax. It is not a team we’ve come across in our years of doing this, so I was pretty sure they weren’t from the Portland area. It was the one game of the tournament with no bleachers, so parents for both sides were standing on the side of the field. Since they were standing right there, as the game was starting I asked one of the Maniax fathers where they hailed from.

“Why, you see some men you want to get dates with?” he snarled. The other parents around him laughed as if this was the wittiest thing they had ever heard.

A while later, on a different part of the sidelines, I watched as our team’s top scorer put the ball in the net with a wicked backhanded fling. This young man is fast and highly skilled, but he’s also pretty short for his age. As he scored, one of the father’s from the other team called his toddler over. “Look at that kid,” he yelled, pointing the player out to his kid. “He’s like you! He’s six years old! He’s a little six year old, just like you!” On the field, the player just shook his head and tried to ignore the bizarre taunts, as the other Maniax fathers laughed along.

The refs let the kids play, which resulted in an especially ugly and violent game on both sides. The worst play by far happened right in front of where I was standing, when a frustrated player took the butt of his stick and thrust it at an opposing player. It was, regrettably, well targeted – it went right through the spaces in the facemask and connected with the kid’s jawbone. The sound was sickening. Along the sidelines, you could hear gasps of horror from the parents on our team – and cackles of amusement from the others. Up until that moment I had been lumping in the Maniax players with their parents, but right then and there I was just overcome with sadness for those boys. What the f**k does having a parent like that do to a kid over time?

This fall my youngest goes into high school. That means another four years of watching him play sports as a youth. He might well play after that, as an adult at college, but it won’t be the same. There’s something pure and free and magical about watching him and his friends on the field or court at this age, something that will begin to fade even as high school sports begins. Youth sports has been a royal pain in the ass as a parent, but now that it’s beginning to come to an end I am realizing I’m going to miss all of it.

Except the terrible parents that come with the package, of course. Those I’ll be happy to wash my hands of forever.