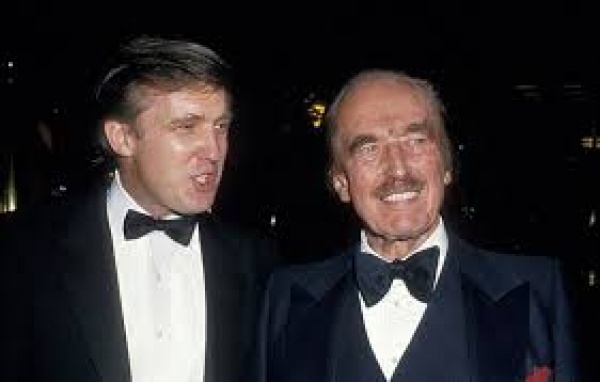 Date Posted: Thursday, September 10th, 2015
According to a New York Times article published in June 1927, a man with the name and address of Donald Trump's father was arraigned after Klan members attacked cops in Queens, N.Y.

In an article subtitled "Klan assails policeman", Fred Trump is named in among those taken in during a late May "battle" in which "1,000 Klansmen and 100 policemen staged a free-for-all." At least two officers were hurt during the event, after which the Klan's activities were denounced by the city's Police Commissioner, Joseph A. Warren.

“The Klan not only wore gowns, but had hoods over their faces almost completely hiding their identity,” Warren was quoted as saying in the article, which goes on to identify seven men “arrested in the near-riot of the parade.”

Named alongside Trump are John E Kapp and John Marcy (charged with felonious assault in the attack on Patrolman William O'Neill and Sgt. William Lockyear), Fred Lyons, Thomas Caroll, Thomas Erwin, and Harry J Free. They were arraigned in Jamaica, N.Y. All seven were represented by the same lawyers, according to the article.

The final entry on the list reads: “Fred Trump of 175-24 Devonshire Road, Jamaica, was discharged.”

In 1927, Donald Trump's father would have been 21 years old, and not yet a well-known figure. Multiple sources report his residence at the time—and throughout his life—at the same address.

To be clear, this is not proof that Trump senior—who would later go on to become a millionaire real estate developer—was a member of the Ku Klux Klan or even in attendance at the event. Despite sharing lawyers with the other men, it's conceivable that he may have been an innocent bystander, falsely named, or otherwise the victim of mistaken identity during or following a chaotic event.

The name of Trump's grandfather, Friedrich Drumpf, was anglicized to Frederick Trump, but he died several years before the report.

A person answering calls at the N.Y.C. Police Department's Records Section said that arrest reports dating that far back were not available in any form. We've sent a formal request in writing and will update if and when we receive a response. We've also left a message with the Trump Campaign requesting a callback.

The article, published on June 1, 1927, describes police frustration at rowdy parades, the Klan's use of masks, and its growing presence in New York City. The Klan, originally founded in the 19th century, was reborn in 1915 as a violent supremacist organization associated with lynchings, white nationalism, and the distinctive white robes and hoods used by Klansmen to conceal their identity at parades and other events. At its mid-1920s peak, it had up to 6m members, according to the Southern Poverty Law Center.

Fred Trump, who died in 1999, was a New York real estate developer and the father of mogul and presidential candidate Donald Trump. Born in the Bronx to German immigrants, Fred became a real estate developer in his teens; at about the time of his apparent arrest, he was constructing single-family houses in Queens, according to his obituary in the Times. At his death, his net worth was estimated at between $250m and $300m. A savvy businessman and real estate developer, his wealth enabled the junior Trump to start big.

If the man arrested at the riotous Klan parade was indeed Donald's father, it would not be his last tangle with the law over issues concerning minorities. A 1979 article, published by Village Voice, reported on a civil rights suit that alleged that the Trumps refused to rent to black home-seekers, and quotes a rental agent who said Fred Trump instructed him not to rent to blacks and to encourage existing black tenants to leave. The case was settled in a 1975 consent degree described as "one of the most far-reaching ever negotiated," but the Justice Department subsequently complained that continuing "racially discriminatory conduct by Trump agents has occurred with such frequency that it has created a substantial impediment to the full enjoyment of equal opportunity."

Donald Trump has made nativism a pillar of his campaign, describing Mexican immigrants as rapists and two Boston men who beat a homeless immigrant as "passionate" fans.

The events described in the Times' article took place 22 years before Donald Trump was even born, and he’s not responsible for any youthful sins his father may have committed. But given the racially-charged tone of the younger Trump's campaign, it raises questions about the values he was taught by the man whose fortune he inherited.