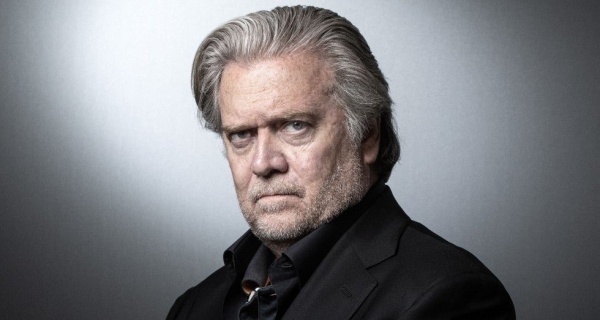 A raft of new developments shows that the GOP civil war over Donald Trump’s legacy is intensifying. A top Senate Republican has now suggested that candidates in the former president’s mold are unelectable. A Never-Trump group just launched ads backing up Republicans who dared to condemn Trump for inciting the insurrection.

Meanwhile, the pro-Trump side keeps mobilizing. Efforts to censure those anti-Trump apostate Republicans are gaining steam. Former White House adviser Reince Priebus is mulling a run for Wisconsin governor on the chief selling point that he’d have Trump’s support.

Into this mayhem has stepped Stephen K. Bannon, who is as attracted to Trump-fueled chaos as insects are to rotting corpses. Trump’s former adviser is now elevating his profile as spokesman for the pro-Trump wing in a way that usefully illuminates the ugly depths of the GOP’s ongoing radicalization.

But the contours of this radicalization also impose an obligation on Democrats — to ensure that nothing impairs a full accounting into Trump’s most recent crime against the country, the effort to incite the violent overthrow of U.S. democracy.

Bannon has entered the fray on two fronts.

A civil war in Pennsylvania

In Pennsylvania, the GOP civil war is now playing out in a Republican primary in advance of the 2022 Senate campaign over the seat of retiring Sen. Patrick J. Toomey, who voted to convict Trump at his impeachment trial.

As Politico reports, Toomey’s vote against Trump is now the central issue in that primary, which is becoming a proxy battle between Republicans still loyal to Trump and those who think continued devotion to him will damage the party’s statewide chances. Bannon has moved to put his stamp on the contest.

As Bannon told Politico: “Any candidate who wants to win in Pennsylvania in 2022 must be full Trump MAGA.”

If you are not “full Trump MAGA,” you will be denied the support of Trump loyalists. What does “full Trump MAGA” mean, exactly? Well, it means absolute devotion to the mythology that Trump should not have been held accountable for his effort to incite the violent disruption of the election that was stolen from him.

The rage of the MAGA forces is pouring down on former congressman Ryan Costello, who is mulling a run for Senate and who suggested it’s a bad idea for county parties to censure Toomey for his vote to convict Trump, as some have already done. Costello says the censures “will hurt Republican candidates.”

For this, Bannon scaldingly denounced Costello as “a sellout to the globalists.” The grand populist-nationalist vision that once animated Trumpism has been reduced to little more than a demand for unwavering lickspittlery to Trump despite (or perhaps because of) his effort to incite violent insurrection.

Bannon’s rhetoric, of course, might prove an empty threat. But the point is that many Republicans appear to view things exactly as he does. Toomey is being widely condemned in the state, with some Republicans raging at his vote as a betrayal of GOP constituents. And other Republicans who voted against Trump are facing censure in Wyoming and North Carolina.

A loony plot to impeach Biden

Bannon’s second threat is even more comically absurd. He recently told a Boston audience that he hopes to see Trump run for Congress in 2022, then run for speaker of the House (which Bannon presumes Republicans will win), then preside over the impeachment of President Biden:

“We totally get rid of Nancy Pelosi, and the first act of President Trump as speaker will be to impeach Joe Biden for his illegitimate activities of stealing the presidency,” Bannon said, leading to applause and hollers from the Boston Republicans.

This is rank crackpottery, but here again, the singular organizing and motivating principle is the idea that Trump’s loss to Biden couldn’t possibly have been legitimate, or that there’s simply zero obligation on the part of the Trump movement to recognize it as such, and that loyalty to Trump requires unwavering fealty to that idea.

Bannon is a scammer, but many Republicans continue to hew to this mythology in various forms. Large swaths of the GOP propped it up by supporting that lawsuit to toss out millions of votes in four states and by voting to invalidate Biden’s electors in Congress. It is currently shaping numerous local intraparty battles and will continue to do so.

What’s more, the lies that underpin this mythology are now inspiring an intensification of voter suppression and counter-majoritarian tactics in numerous states. This radicalization of the GOP against democracy could have a major impact on our political future.

All of this, I think, imposes an obligation on us to ensure that what happened on Jan. 6 is not memory-holed and gets the full accounting it deserves.

We must have a full accounting

With Democrats launching a commission that will get to the bottom of the insurrection, Republicans are already working overtime to preclude full scrutiny of Trump’s role by pretending this would be unacceptably “partisan.”

In short, Republicans will try to either erase Trump’s role from this full accounting or dramatically downplay it by recasting the whole reckoning process as an examination of security failures at the Capitol or violent extremism on “both sides.”

Those Republicans who want the GOP to fully renounce Trump understand the importance of a full reckoning with the insurrection. Just look at this brutal new ad from the Never Trump Republican Accountability Project, which shows dramatic footage of the violence and calls on Republicans to agree to the following proposition: “This can never happen again.”

Truly grappling with the implications of GOP radicalization absolutely requires a total reconstruction of what Trump’s months-long campaign to overthrow U.S. democracy wrought, so we understand what this movement is capable of in the near and far future. Bannon may be a thug and a grifter, but at least he has made this unavoidably clear.