Opinion: Marjorie Taylor Greene Yet Another Sign Of The Republican Party's Existential Crisis 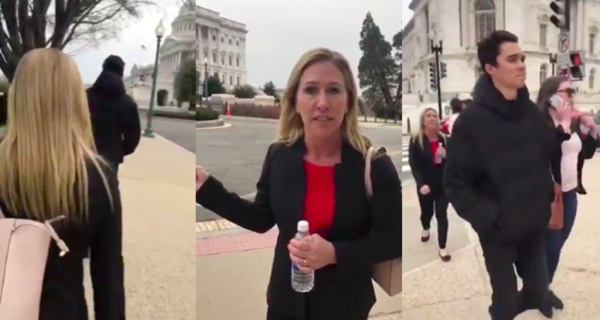 Our View: House Republican leaders stripped Steve King of committee assignments for remarks 'beneath the dignity of the party of Lincoln.' How about hate-filled posts by this QAnon fan?

It was the latest and evidently last straw in a series of offensive views by the Iowa lawmaker. GOP leaders stripped him of his committee assignments and condemned his character. “Steve’s remarks are beneath the dignity of the party of Lincoln and the United States of America,” House Republican leader Kevin McCarthy said of King, who went on to lose to a primary challenger last June. “House Republicans are clear: We are all in this together, as fellow citizens equal before God and the law.”

So how does the party of Lincoln feel about Marjorie Taylor Greene?

Greene makes King look like a relative statesman. Even before she was elected to represent Georgia’s 14th congressional district, Greene embraced QAnon and other crackpot conspiracy theories, including that horrific mass shootings were phony assaults on the Second Amendment. Her Facebook account contained racist, Islamophobic and anti-Semitic views.

House Republican leaders rightly denounced her and her candidacy at the time, and threw their support to a GOP opponent in last summer’s Georgia primary. But Greene prevailed in the primary, and since then QAnon conspiracists — with their lies about a global cabal of Satan-worshiping pedophiles — have become among the most conspicuous extremist groups devoted to Donald Trump, who declines to disavow them. They were among rioters who stormed the U.S. Capitol this month, putting lawmakers and then-Vice President Mike Pence in potentially mortal danger.

Greene voted against impeaching Trump for inciting the insurrection, but ludicrously, she filed articles of impeachment against President Joe Biden the day after Biden was sworn in.

Whose 'teams of people'?

Now, CNN has dug up more repugnant social media posts by Greene from 2018 and 2019, among them endorsements of violence against Democratic leaders and federal agents. In one citation, she “liked” a comment urging a “bullet to the head” of House Speaker Nancy Pelosi.

One could reasonably — and concerningly — ask whether Greene has brought this ideology into the chamber where Pelosi presides.

Greene’s unapologetic and dismissive response has been to blame “teams of people” managing her Facebook account for actions that “did not represent my views.” And, in any event, it was all before she ran for office.

That hardly makes it ancient history. The site is hers with her name on it, regardless of any dubious claims that others administered it.

So is Greene, like King, also “beneath the dignity” of Republicans and the USA?

A McCarthy spokesman said the minority leader was deeply disturbed by Greene’s anti-Pelosi comment and would have a chat with her. In the meantime, Republican leaders have awarded her a seat on the House Education and Labor Committee.

Greene’s presence is yet another sign of the existential crisis facing the Republican Party in the era of Trump. Some leaders want the party to evolve beyond Trump and re-embrace traditional values of limited government, fiscal responsibility, and the primacy of ethical leadership. Others might wish the same but are too intimidated or frightened to forsake Trump and the hold he retains over rank-and-file Republicans.

And, finally, there’s a group that zealously guards the Big Lies — such as a stolen presidential election — that Trump embodies. Greene is on the leading edge of this fearmongering.

At a minimum, she should be denied committee assignments and shunned by GOP donors. Other options include reprimand, censure or expulsion, particularly if she remains unapologetic or dodgy about her hate-filled views.

Throughout history, Democrats and Republicans have both had fringe or corrupt members in their midst. How GOP leaders deal with someone so obviously unfit for office will speak volumes about the party’s values.