Opinion: Assault On Democracy: Sen. Josh Hawley Has Blood On His Hands In Capitol Coup Attempt 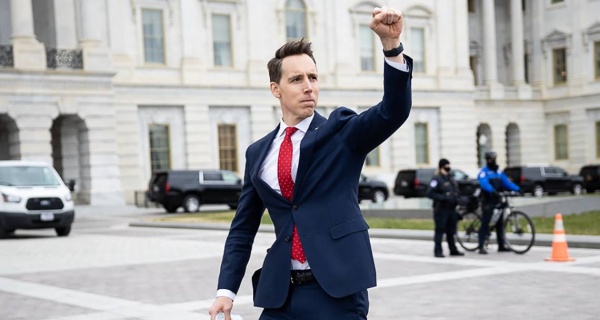 No one other than President Donald Trump himself is more responsible for Wednesday’s coup attempt at the U.S. Capitol than one Joshua David Hawley, the 41-year-old junior senator from Missouri, who put out a fundraising appeal while the siege was underway.

This, Sen. Hawley, is what law-breaking and destruction look like. This is not a protest, but a riot. One woman who was apparently part of the pro-Trump mob was fatally shot by Capitol Police as lawmakers took cover. Some of those whose actions Trump encouraged and later condoned brought along their Confederate flags.

And no longer can it be asked, as George Will did recently of Hawley, “Has there ever been such a high ratio of ambition to accomplishment?” Hawley’s actions in the last week had such impact that he deserves an impressive share of the blame for the blood that’s been shed.

Hawley was first to say that he would oppose the certification of Joe Biden’s Electoral College win. That action, motivated by ambition, set off much that followed — the rush of his fellow presidential aspirant Texas Sen. Ted Cruz and other members of the Sedition Caucus to put a show of loyalty to the president above all else.

After mayhem broke out, Hawley put out this uncharacteristically brief statement: “Thank you to the brave law enforcement officials who have put their lives on the line. The violence must end, those who attacked police and broke the law must be prosecuted, and Congress must get back to work and finish its job.” So modest, Senator, failing to note your key role in inspiring one of the most heartbreaking days in modern American history. We lost something precious on Wednesday, as condolence notes to our democracy from our friends around the world recognize.

Among those Hawley got to emulate him was Kansas Sen. Roger Marshall, whose very first act as a member of the world’s greatest deliberative body was to sell out his country by attempting to overturn the outcome of a legitimate election.

This revolt is the result, and if you didn’t know this is where we’ve been headed from the start, it’s because you didn’t want to know.

“The Frankenstein just tore down the doors to the palace,” U.S. Rep. Emanuel Cleaver, a Democrat from Missouri, told The Star. Which happened because, as he said, “One-third of the nation has bought into a bald-faced lie, and they are living in a fact-free America.”

“I’m currently safe and sheltering in place while we wait to receive further instruction from Capitol Police,” tweeted U.S. Rep. Sharice Davids, a Democrat from Kansas. “Today is a dark day for our country. It’s unacceptable that we have a President who has repeatedly condoned and even encouraged this despicable behavior. It must stop.”

We’ll say again what Davids is too polite to say: Trump did not manage this madness on his own. Far from it.

Just before the putsch began, Senate Majority Leader Mitch McConnell said sadly that we need to once again work from an agreed-upon set of facts. Only now has he noticed that lying to the public on a daily basis poisons democracy.

“People have taken this too far,” House Minority Leader Kevin McCarthy said on Fox News. Until he had to run for cover, McCarthy was fine with this sick stunt.

U.S. Rep. Andy Barr, a Republican from Kentucky, said in a statement, “Today’s events at the U.S. Capitol are tragic, outrageous, and devastating. They are wholly inconsistent with the values of our constitutional Republic.”

Yes, they are. But they are wholly consistent with Trump’s calls to overturn this election to address nonexistent fraud. And they are wholly predictable, given the willingness of most Republicans to repeat these baseless claims.

When we wrote that Hawley’s actions were dangerous — and that those of Missouri Sen. Roy Blunt and others were too, in their pretending for far too long that the election wasn’t over — some readers found that absurd. “Oh my goodness, how will democracy and our country survive?” one reader wrote in sarcasm. “How will Biden possibly govern? The Star editorial board’s hysteria over nothing is approaching CNN levels.”

No doubt plenty of Americans will see even this free-for-all in the temple of democracy as defensible. And those of you who have excused all of the brazen lawlessness of this administration can take a little bit of credit for these events, too. They couldn’t have done it without you.

Hawley, Marshall, and other Republicans who upheld Trump’s con about widespread fraud knew all along that his claims were bogus. Now that they’ve seen exactly where those lies have landed us, decency demanded that they try to prevent further violence by making clear that President-elect Joe Biden did not win by cheating.

Others did back off their claims that the election isn’t over, including newly defeated Georgia Sen. Kelly Loeffler, who said Wednesday night, “I cannot now in good conscience object” to approving the Electoral College vote.

Republican South Carolina Sen. Lindsay Graham told his colleagues, “Count me out; enough is enough.” He said plainly that Biden had been lawfully elected. Republican Pennsylvania Sen. Pat Toomey called Trump a demagogue, and Republican Utah Sen. Mitt Romney suggested that the better way to calm those who believe the election was stolen would be to tell them the truth that it was not.

Hawley, as he likes to do, quoted Abe Lincoln, who was not there to object, and then doubled down on his pretended alarm about possible fraud.

For “those who have concerns about what happened in November,” he said, “this is the appropriate means, this is the lawful place where those objections and concerns should be heard.” And once again Hawley, as he likes to do, isn’t telling the truth.