Opinion: An Apology For The Electoral College 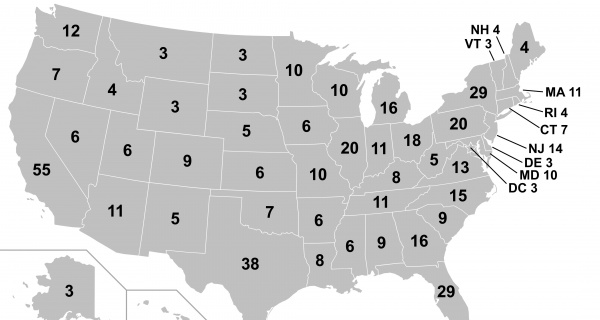 The last two presidential elections have raised serious questions on the value or necessity of the Electoral College as a constitutional institution. The disparity between the popular vote and the Electoral College vote in the 2016 election highlighted the disconnect between democratic and federalist principles. The 2020 election has again raised the issue, although from a different perspective.

Opponents of the Electoral College have traditionally argued that it is a vestige of a past that needs to be eliminated in favor of a direct majoritarian popular vote. In a recent interview, for example, former President Obama commented on our imperfect democracy and of the need of reviewing the need for the Electoral College. This was said within the context of the possible admission of Washington, D.C., and Puerto Rico as states of the union.

Contrary to popular opinion, the Electoral College has a role to play within our constitutional design, and its elimination could significantly alter the balance of political power among the states, undermining the federalist model of representative government.

Article II, Section 1, Clause 2 provides that “each State shall appoint, in such Manner as the Legislature thereof may direct, a Number of Electors, equal to the whole Number of Senators and Representatives to which the State may be entitled in the Congress: but no Senator or Representative, or Person holding an Office of Trust or Profit under the United States, shall be appointed an Elector.”

Commenting on the process of the Electoral College in The Federalist Papers: No, 68, Alexander Hamilton argued that the Electoral College afforded “a moral certainty that the office of the president will never fall to the lot of any man who is not in an eminent degree endowed with the requisite qualifications.” This is not the first time Hamilton has been proven wrong.

The Electoral College is a political institution that was created in part to rein in the possibility of “mob rule” as feared by James Madison and other Founding Fathers. Andrew Jackson’s presidency put an end to this elitist view of democratic participation.

Perhaps because of the Civil War, the 14th Amendment, and the growth of the federal administrative state since the New Deal, we tend to overlook the importance of the state as a political unit. It is true that there are terrible historical experiences — such as secession and segregation — which argue against celebrating the autonomy of the state. Unfortunately, the pendulum has swung in too many instances in the other direction. Today national politics is seen from the hegemonic perspective of the federal government. In this context, the upcoming Georgia Senate runoff elections are a powerful reminder of the importance of the state in the balance of power in Congress.

The Electoral College is an important brick in the edifice of federalism. The Electoral College maps of the 2016 and 2020 elections give a bird’s eye view of the split between coastal and interior states, reflecting the demographic shifts of the last decades. It is politically understandable why states with small populations will generally favor the Electoral College, while more populated states favor the popular vote. It is a matter of distributing political influence in the executive branch across the country. This political calculus should remind us of the Great Compromise of 1787 and why we have a House of Representatives and a Senate.

The selection of the electors is governed by state law as provided by the Constitution and reiterated recently by the Supreme Court in Chiafalo v. Washington (2020), which upheld state law over and against the so-called faithless elector. Currently, 48 states award all of a state’s electoral votes to the candidate receiving the most popular votes in each state.

In reaction to the rare occasion in which the Electoral College has not reflected the popular vote — it has only happened in five elections in 232 years — some states have been pushing for the National Popular Vote Interstate Compact, which aims to guarantee the presidency to the candidate who receives the most popular votes across all 50 states and the Washington, D.C. This compact has thus far been enacted by 16 jurisdictions possessing 196 electoral votes. The compact will take effect among its signatories when it has been enacted by states with 74 additional electoral votes. This compact works to the advantage of densely populated states.

As a citizen of the territory of Puerto Rico that aspires to statehood, I favor the Electoral College. Were it to be a state with a population of close to 3.3 million people, Puerto Rico would have a right to two senators and five members of Congress, for a total of seven electors to the Electoral College. Besides its congressional delegation, Puerto Rico‘s seven electors would give it a voice in the election of the president and in the execution of its policies. As a state, were Puerto Rico to favor the National Popular Vote Interstate Compact, it would find its political influence diluted within the larger populated states. As an unincorporated territory without voting rights, we know firsthand what it means to be lost in the shuffle.