Opinion: A Republican Senate Would Be Bad for Business 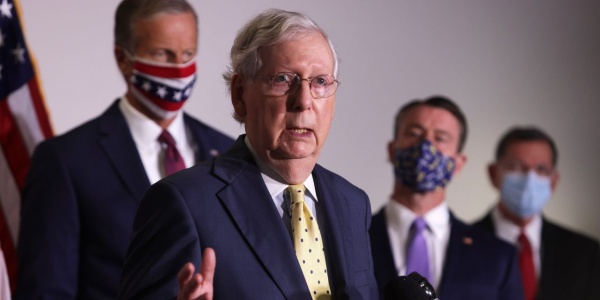 What’s bad for America would be bad for corporations, too.

So the blue wave fell short of expectations. Joe Biden will be the next president, but unless Democrats pull off an upset in the Georgia Senate runoffs — which, to be fair, they might, given the remarkable strength of their organizing efforts there — Mitch McConnell will still be the Senate majority leader.

Big business seems happy with this outcome. The stock market was rising even before we got good news about prospects for a coronavirus vaccine. Corporate interests appear to imagine that they will flourish under a Biden presidency checked by Republican control of the Senate.

But big business is wrong. Divided government is all too likely to mean paralysis at a time when we desperately need strong action.

Why? Despite the vaccine news, we are still on track for a nightmarish pandemic winter — which will be made far worse, in human and economic terms, if a Republican Senate obstructs the Biden administration’s response. And while the economy will bounce back once a vaccine is widely distributed, we have huge long-term problems that will not be resolved if we have the kind of gridlock that characterized most of the Obama years.

First, the pandemic: With much of the public’s attention focused either on Donald Trump’s last-ditch efforts to steal the election or on hopes that a vaccine will let us resume normal life, I’m not sure how many people realize just how ruinous a prospect we’re facing for the next few months.

Over the past week, Americans have been dying from Covid-19 at the rate of more than 1,000 a day. But deaths typically lag a few weeks behind reported cases — and the daily number of new cases has doubled over the past three weeks. This means that we’re almost surely looking at 2,000 deaths a day at some point next month.

And the number of new cases is still rising exponentially, so things will get much, much worse over the months that follow, especially because until Jan. 20 we will, for all practical purposes, not have a president. By the time Biden is finally inaugurated we may well be having the equivalent of a 9/11 every day.

In addition to bringing death as well as long-term health damage for many survivors, the exploding pandemic will bring immense economic hardship. Responsible governors are imposing new lockdowns that may help curb the spread of the coronavirus, but that will also lead to a new wave of job losses.

True, some of the worst coronavirus outbreaks are now in states with irresponsible governors who won’t even impose mask mandates. But even in those states people can’t help noticing that friends and neighbors are dying and that the hospitals are full; they will cut back on their spending, leading to many lost jobs, even without political guidance.

What we need, clearly, is a very large-scale program of disaster relief, providing families, businesses and, not least, state and local governments with the help they require to avoid financial ruin until a vaccine arrives. And you might think that a Republican Senate would be willing to work with the Biden administration on such an obviously necessary program.

That is, you might think this if you’ve been hiding in a cave for the past 12 years.

Remember, Mitch McConnell’s famous declaration, “The single most important thing we want to achieve is for President Obama to be a one-term president,” came in October 2010, at a time of sluggish recovery and extremely high unemployment. Why expect him to be more cooperative, more willing to act in the national interest, when millions of dead-end Trump supporters are accusing establishment Republicans of stabbing their hero in the back?

Realistically, the most we can hope for is a stingy package that falls far short of what America needs. And I wonder whether Trump-fearing Republicans — who have offered remarkable profiles in cowardice as the soon-to-be ex-president makes wild claims about election theft — will be willing to agree to even that much.

The good news is that the misery will abate when we finally have widespread distribution of a vaccine. In fact, we’ll probably see a sharp jobs recovery late next year.

But that won’t be the end of the story. Before the coronavirus struck, America had low unemployment — but our short-term (and very unequally distributed) prosperity masked the extent to which we were neglecting our future. We desperately need to spend trillions on repairing our crumbling infrastructure, caring for our children and meeting the urgent need for action against climate change.

How much of that essential spending will a Republican Senate agree to? The best guess is zero. After all, McConnell blocked infrastructure spending even when Trump was in the White House and public investment could have helped keep him in office.

Now, what’s bad for America isn’t necessarily bad for corporations. But given where we are, divided government would mean paralysis in a time of crisis, which could very well be catastrophic for everyone. The truth is that even in its own interests, the big money should be rooting for Democrats in those Georgia runoffs.