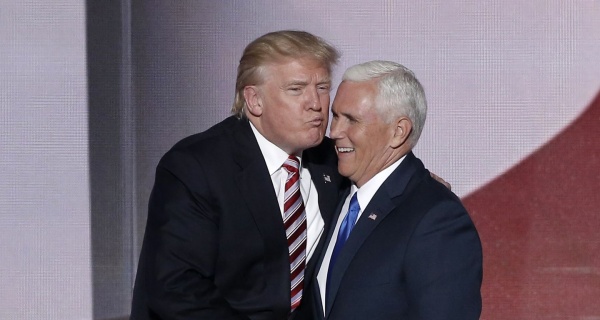 Mike Pence spent most of his time as VP using his blandness, his low murmuring voice, and his biblical “servant leadership” to quietly normalize Donald Trump for a certain type of person. For example, he once called his boss a “man of his word.” Then, the pandemic hit, and Pence was made head of the White House’s coronavirus task force, a fittingly Trumpian choice, given that Pence had historically been disastrous on public health. And he wasn’t just bad on the typical stuff, like trying to take away affordable health care. When he was governor of Indiana, his policies actively worsened his state’s HIV outbreak. He has been, in various moments, on the wrong side of condoms, smoking, and even daycare.

In charge of guiding America through a pandemic, with Anthony Fauci and all manner of doctors and scientists at his disposal, Pence took the opportunity to add masks, plexiglass, and cruise ships to his list of public health fuck-ups. As the head of the task force, he routinely missed its planning calls.

The VP was never the main driver of disinformation during the pandemic (or the presidency, at large), but he was bizarrely happy to further the cause. While America was climbing up the second wave of COVID-19 cases, Pence was declaring that he would “keep opening up America” While parents were bracing for a chaotic school year, Pence was speaking at the Life Wins! 2020 Tour (the “life” in question being cells in utero). While Trump was sick with COVID and maniacally tweeting about the “SPACE FORCE,” Pence was sharing bland positive updates—like a video of Trump’s doctor, shared without commentary—that fit with the narrative that everything was going just fine, even as Trump clearly appeared to be in a meltdown of illness and falsehoods. This is the crux of Pence’s VP-ship, really: delivering Trumpism minus the swears and the yelling.

“We’re about freedom and respecting the freedom of the American people,” Pence said at the vice-presidential debate in October, a patriotic bon mot that covers for absolute selfishness. It came in the same breath as a defense for attending what became a superspreader event at the White House. He started by outright lying about the nature of the party, saying, among many other things, that “it was an outdoor event, which all of our scientists regularly and routinely advise.” In reality, it involved no distancing, a scant number of masks, and it happened partially indoors.

Mike Pence being tapped to lead the coronavirus task force is a reflection of the broader role he filled for the Trump administration: He was meant to quietly, happily carry buckets of shit in exchange for proximity to power. But even as he has spent much of the past four years wandering around in the background with his perpetual simple smile, we should not forget the deal he took, and what it cost our country. Pence’s entire modus operandi during COVID appears to be that neither he nor Americans were obligated to engage in the Sesame Street–level skill of cooperation with scientists or with one another. And yet, he always found room in his heart for Trump. After the Access Hollywood tape, he gently said that he did not condone it, and then went on to accept Trump’s apology and happily continue serving in his role as enabler. He provided permission for Trump supporters to spend four years accepting the president’s worst, most damaging impulses.

Pence should spend his post-Trump life hanging out with Mother, the fly, and no one else.