Opinion: As Famous Rappers Get Used as Pawns, Meet the Black Men Doing the Real Work 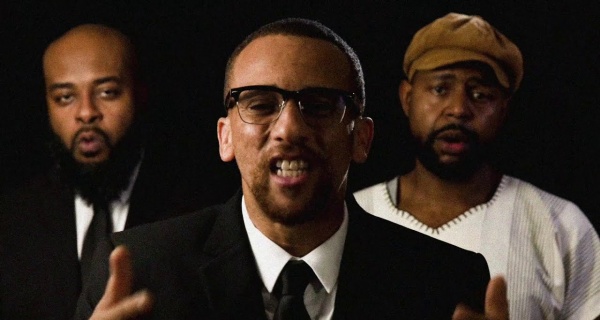 Man, there sure are a number of Black men in the political arena looking like clowns these days. And as much as I enjoy a good laugh, I don’t think it’s really the time to be entertained.

There’s a pretty big election happening right now in the United States. There are also international conversations and actions pushing changes in the way we’re policed, and there’s an ongoing global pandemic that has killed over one million people worldwide.

So why are we listening to entertainers?

Why do we need a breakdown of the meetings between Ice Cube and President Trump’s camps? Why do we care about 50 Cent’s flip-flopping political views? Did we really need Diddy to hop on the airwaves and announce he’s starting a new political party? Why is Lil Wayne’s support of Trump noteworthy? Why is Young Jeezy’s support of Joe Biden a story? Why... is Kanye West?

Hella questions. At the top of my list: when it comes to creating change in our community, in this election cycle and beyond, what is the role of Black men? 'Cause judging from these popular stories I'm seeing... it's questionable.

Last week I turned to social media in search of answers. I needed stories of Black men taking action to make this world a bit better, both through electoral politics and outside of the political structure. No, you don’t hear me: I needed these stories.

So it was refreshing to learn about Maryland’s Neal Carter and his Nu View Consulting organization, which focuses on getting African Americans living with disabilities politically engaged. Or Cameron Whitten, a Black man in Portland, Oregon who’s politically active; I’ve been following Black Lives Matter protests up there since the summer and he’s the first African American man involved that I’ve heard of.

I needed to be introduced to the education work Michael Sorrell is doing in Texas, the organizing work Lamont Lilly is doing out of Durham, NC, and the work of Cody Renard Richard, who in this interview from earlier this year explains how he’s fighting for equal rights in the world of Broadway theatre in New York.

Locally, people suggested I check out the work of Tur-Ha Ak, whose work with the Anti Police-Terror Project I’ve mentioned in my writing before. The Oakland group Black London put out an admonition to vote and claim representation for the people in their video for "Power." And I was asked to look at the work of People’s Breakfast Oakland, which I’ve also noted in past columns.

Partially inspired by People’s Breakfast Oakland, Sacramento’s Jordan McGowan told me about co-founding the Sacramento Neighbor Project, which focuses on community-based responses to police violence and using mutual aid to get resources to those in need. Without talking to McGowan, I might not have known about Willie Brown, an African American man who has been on life support after being found hanging from a basketball hoop in a Sacramento park last week.

That might a bit more important than what T.I. has to say about politics.

But maybe it’s not sexy enough? I’m not a media strategist or anything, but I’m starting to think big publications are more concerned with generating revenue from click-based advertising than actually informing the masses about critical issues during a time when so much is at stake.

Again, why are we listening to entertainers?

OK, here’s a story that might be more enticing: the former drug kingpin-turned-author, Oakland’s Darryl Reed, who was granted clemency by President Obama, is voting for the first time and politically organizing in his community of East Oakland. Where’s the news on that?

Reed is supporting the organization 100 Black Men of The Bay Area to engage people in voter education, registration, and voting. Neale Clunie, a representative for the organization, tells me they’re part of the “We Ride, We Vote” biking and voting event on Sunday, Nov. 1, from 1-5 pm in San Francisco.

Clunie also tells me that his organization is teaming up with the National Coalition of 100 Black Women. “Black women are the cornerstone of the Democratic party; they generally have a better turnout,” says Clunie. He’s right: according to Pew Research, eligible Black women voters have shown up more readily than Black men for decades. (To be fair, women vote in larger numbers than men in general.)

Much has been written about the power of Black women voters, and Pastor Michael McBride, of The Way Christian Center in Berkeley, says that doesn’t have to negatively impact Black men when it comes to voting or community organizing.

“Men don’t have to shrink or cower or disappear for women to be strong,” Pastor McBride tells me. “We just have to be willing and humble. Coordination with all of our community is happening at the same time.”

(McBride, who was on the move when we talked, mistakenly thought I said my name was “Twin” when I introduced myself as Pen. He explained that Twin is someone he’s working with in order to quell a festering beef after a recent shooting—evidence of Pastor McBride’s community involvement.)

McBride then said he’s on the verge of embarking on a “Black bus tour” through the United States’ southeast region. He and a team of folks aim to hit 14 cities—Orlando, Atlanta, and Raleigh, to name a few—over a span of 10 days to assist people in getting to the polls.

McBride says the role of Black men right now is “to be what we’ve always been when we’ve been at our best.” Black men are freedom fighters, truth-tellers, and protectors of our community, he says. “We need to lead with a healthy sense of strength and humility to understand the complexity of the issues that have impacted all of the members of the community,” says McBride. “Leadership doesn’t always require to be out in front. It’s about discerning the moment. The plight of Black people requires a lot more coordination in order to beat white supremacy.”

Along with the prevalence of Black male entertainers' tone-deaf participation in politics, the popular stories of actual Black male politicians have been disheartening.

The story of Kentucky’s Attorney General Daniel Cameron blocking the process of holding the cops who killed Breonna Taylor accountable is disgusting. The highly-publicized extramarital affair of former Florida Governor Candidate Andrew Gillium makes me ask what the media’s aim is. And here in the Bay Area, I’ve been following the unearthing of details around front-running Vallejo mayoral candidate Hakeem Brown and his history of domestic abuse.

So, again, I needed these benevolent stories.

I’m not giving anyone a pass as a “good guy.” I’m not naive enough to think that in this society any man has clean hands—or any human, for that matter.

But there should be more appreciation for someone like Colin Kaepernick, who is using his popularity to back Abolition For The People, a publication rooted in challenging America’s prison-industrial complex. Or acclaimed poet Marc Bamuthi Joseph, who’s using his platform to let other lyricists express themselves about the lies our current president has told in a project he calls 45 Lies.

Hell, even Mike Tyson, who recently had a conversation with Lil Boosie about his derogatory comments on the LGBTQ community.

Black male celebrities can do so much by simply not playing into the media’s need to feed off of clickbait. I'm not saying don't get involved in politics, this isn't a "shut up and dribble" situation. (Or even a shut up and "riddle" situation, for the rappers in the room.)

But there's another way.

Barbershop-style discussions with former President Barack Obama are cool and all, but the best approach is using your platform to push the ideas of lesser-known people who, though not always “newsworthy,” have been steeped in the work.

With the reintroduction of the term “super predator” into the popular lexicon, this week's research proved to be the reminder I needed, just a note that we’re much more than what popular media depicts.

And as a Black man, who is also a member of “the media,” it’s my job to do all that I can to make sure we push for more of what The Los Angeles Times attempted to do a few weeks ago with its public apology for its decades worth of misrepresenting Black and brown urban communities.

Again, there is a lot going on in the world: I haven't even mentioned global warming.

But this had to be written, if not then we'd risk falling back down a path that could lead to the type of storytelling that supported the incarceration of the Central Park Five and the passing of the 1994 Crime Bill—a bill that adversely impacted a generation of Black men.

Well, not the entire generation. There were some entertainers who made so-called “gangsta rap” music and leveraged the concept of being a “super predator” for their own financial gain.

A few of them are now being postured as "political leaders." Go figure.