Opinion: The President And The Pandemic. 150 Days That Changed An Election. 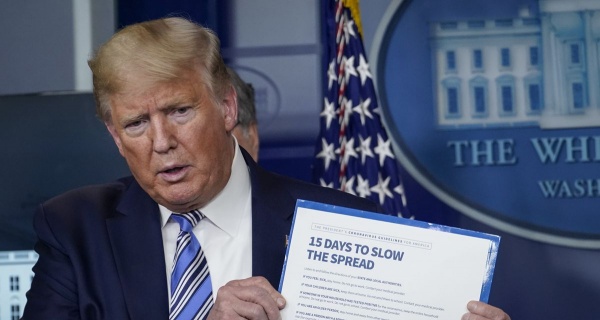 If I only knew then what I know now

There can be no doubt about it. By its very nature, the global coronavirus pandemic has become the overarching issue of the 2020 election. Donald Trump certainly didn’t want that. As an unpopular, minority popular vote President, Trump knew he had only one strength to run on, and that was the economy he inherited from Obama. Trump lost control when he failed to realize that the stock market economy was not the economy most Americans lived under. And he compounded that error when he failed to realize that having his Department of Justice argue in favor of overturning the ACA in front of the Supreme Court in the middle of a pandemic was a mistake.

When you look at the coronavirus, and the tragic effect it has had on this country, there are three simple things that you have to remember. 1) It didn’t have to be this way. 2) It never should have turned out this way. 3) It was absolutely inevitable that it would turn out this way.

I know, that sounds like a totally incomprehensible mishmash. But to untangle it, you only need to remember the leader involved. And when it comes to Donald Trump, there are only two things you have to remember. 1) He is a compulsive narcissist with a long memory for grudges. 2) He is quite possibly the worst micromanager in the history of mankind.

When I spoke about 150 days in my title, the actual time range is somewhat fluid, depending on what you want to look at. But the time frame that I chose was from about the 15th of March, when first California, followed by Nevada shut down their states with protective measures, until about August 15, after the full effects of Trump’s reopen the economy orders, as well as the effects of the Memorial day and 4th of July weekends had been fully felt.

To understand better what happened, the decisions that were made, and their impact on the outcome, we need to understand the mentality of Trump himself, especially in regards to the presidency. History has shown that the best Presidents are the ones who went in fundamentally understanding the job of the presidency the best. Traditionally, the only things that should land on the President’s desk are things that were unable to be resolved by the chain of command underneath. Think of the President’s desk as a court of last resorts. Therefore, the first job of the President is to use the vetting process for potential nominees to nominate the people best suited to handle the maximum number of problems arising from that agency.

The other mitigating factor that worsened the pandemic is Trump’s tissue paper feelings, and his history of holding grudges for decades if necessary in order to obtain payback. It is widely believed that then-President Barack Obama’s merciless roasting of Trump at the 2011 White House Correspondents Dinner, with Trump in attendance, was a decisive slight that formed his desire to run for President in order to gain revenge. I can think of all kinds of reasons to run for President, but paying back a previous President for some nasty jokes isn’t one of them.

Earlier I said that this pandemic shouldn’t have had to be this way, and in fact, it shouldn’t have gone this way, and here’s what I meant. Even a President with a room temperature IQ like Trump should have been able to handle the coronavirus pandemic, and in fact, it should have been in his wheelhouse. After all, there is nothing Trump loves more than signing shit, and if he had handled this properly, that’s all he would have had to do.

Trump should not have gone into this crisis unprepared. During the Ebola virus crisis, Obama put together a panel of experts to throw together a flexible, workable framework plan for the United States to use to respond to a pandemic that crested our shores. The experts took their time, and they did it right. When Trump took office, his staff was presented with a ream of binders, carefully prepared, with such common sense things as using the War Powers Act to increase production of PPE’s and masks, federal coordination of the dispersal of supplies, and a national tracking database. The beauty was that no matter what kind of a pandemic we faced, the steps would work. Trump threw them in the shit can out of spite.

The second problem was pure Trump ego. Trump nominated his cabinet members with two basic criteria. One, make sure that they were as corrupt as he was, to provide a comfort zone among thieves, and two, make sure that they would never grab the spotlight from Trump. Unfortunately, if you hire experts to do something, it is inevitable that they will take the spotlight when a crisis in their area of expertise comes up. But Trump would never willingly relinquish the spotlight, and so ended up with a bunch of second rate hacks’ that would have to carry out any orders he gave.

Here’s where the real damage was done, and why it should not have been. Trump should have been ready to begin to activate the necessary arms of the government to respond in the earliest days and to buoy public support with instant action. They’d have been in Trump’s wheelhouse. Trump went into this crisis with a basic framework already at hand. All Trump needed to do was to sit at the Resolute desk and publicly sign a series of executive orders following the experts advice, and let qualified cabined members execute them. But Trump wouldn’t use Obama’s plan framework, wouldn’t listen to the experts, and had shit for underlings.

Because it was all nothing more than a matter of perception. Trump never gave a fat rat’s ass about the American people, it was all just a political exercise. And Trump realized that his only thin, razor narrow path to reelection was a strong, vibrant economy. And this stupid virus was wrecking his beautiful economy. Trump never made the mental bridge crossing that if the main street economy shut down, and people refused to shop, the Wall Street economy would suffer.

And again Trump’s ego kicked in. When Democratic-controlled states like Washington, Oregon, California, Nevada, Illinois, New Jersey, and New York started shutting down to protect their citizens, Trump ridiculed them for it. Worse yet, Trump publicly fought with the Democratic governors and didn’t mind it a bit when it got out that he wasn’t exactly busting his ass to get them the necessary support. This was a politically stupid thing to do, if for no better reason than because it stripped him of the opportunity to glom some of the credit when those states began to get their virus under control, while states that followed Trump’s lead were just seeing their cases start to spike.

Which led to the third act of this modern Greek tragedy. Democratic governors had the virus under control, but it was a hard-fought, bitterly contested victory, and they were in no hurry to reopen their states and have to start all over again. I live in Vegas, and Nevada Democratic Governor Steve Sisolak was gushing in every public pronouncement about the way Nevadan’s had pulled together to get things under control. But Trump was in the hurt locker. True, the stock market was rebounding, fueled by companies that were more or less immune to the effects of the virus, but Main Street was in tatters. Unemployment was a nightmare every week, and so was the fact that every week more and more small businesses shut their doors for the last time. The answer was simple, shut down the red states for 30 days to bring their own infestations under control in line with the rest of the country, and begin a carefully phased approach to reopen them safely.

But that would take time, and time was something that Trump was running out of. His approval was plummeting, Biden was leading in all polls, and the main culprit was the virus. Instead, Trump chose to ram through reopening the economy nationwide, and the consequences be damned. At the time I wrote that the history of this pandemic in the United States would be written between two holidays, Memorial Day and the 4thy of July. And tragically, I was right. While the blue states opened cautiously and were able to take steps afterward to fine-tune their orders and at least try to mitigate the damage, the red states went full throttle, and the results were devastating. People gathered en masse for both holidays, there were no masks or self-distancing, and in the weeks following the holidays, cases in the southwest, south, and southeast went on a rocket ship to Mars.

This is nothing more or less than a true American tragedy. As I wrote, it didn’t have to be this way, and it never should have been this way, but for truly spectacularly incompetent leadership. But from where I’m sitting, Trump’s political epitaph will actually be written by the red state of Arizona. In the weeks after the 4th of July, the state of Arizona went through a spike that made it the worst in the nation. After weeks of overburdened hospitals, the GOP Governor finally ordered the closing of all bars and restaurants, and a statewide mandatory mask requirement. And in the next 30 days, the new infection rate in Arizona went down by 75%! Any of them could have done it. At any time. And if they had, then 150,000 Americans would still be alive. 23 days left to go.