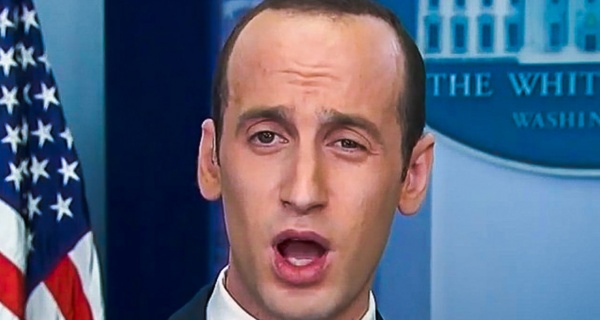 Language is a tool for shaping minds, and Miller knows how to weaponize it.

Over the past week, the Republican National Convention sought to conjure a “radical left” hellscape.

Speakers conflated anti-racist protesters with deranged criminals out to destroy the country. Donald Trump Jr. called Joe Biden “the Loch Ness monster,” while the conservative activist Charlie Kirk praised Donald Trump as “the bodyguard of Western civilization.” In his speech on Thursday, the president denounced “mob rule.” “Your vote will decide whether we protect law-abiding Americans, or whether we give free rein to violent anarchists and agitators, and criminals who threaten our citizens,” he said.

The language at the convention comes from the “white genocide” conspiracy theory, which warns, among other things, that brown and Black people will destroy white civilization with the help of their anti-racist allies. It echoed that of the racist-dystopian novel “The Camp of the Saints,” which Stephen Miller, Mr. Trump’s senior policy adviser, and speechwriter, promoted in 2015 through the right-wing website Breitbart.

The book, by the French author Jean Raspail, characterizes “anti-racists” as an apocalyptic “mob” of “agitators” and “anarchists,” and depicts the destruction of the white world by brown refugees described as “monsters,” “beasts” and “toiling ants teeming for the white man’s comfort.” He wrote of a world where “anti-racists” are “servants of the beast” tainted by the “milk of human kindness.” Empathy and interracial ally-ship are associated with primitive bodily functions.

Language is a tool for shaping minds, and Mr. Miller knows how to weaponize it. It’s why he draws from books like Mr. Raspail’s to shape rhetoric. It’s why, in 2015, he asked writers at Breitbart to produce an article about the parallels between the book and real-life that painted the book as prophetic. It’s also why he inserts vivid, gory descriptions of crimes ostensibly committed by migrants into Mr. Trump’s speeches.

In July, Mr. Miller told Tucker Carlson that the federal crackdown on anti-racist protesters in Portland, Ore., was about “the survival of this country.” In an interview with the radio host Larry O’Connor that month, he said the priority of the administration was protecting America from the dangers of “cancel culture,” which he described as “a very grave threat to American freedom.”

Mr. Trump is leaning on Mr. Miller’s dystopian vision to stoke white fear the way Mr. Miller did in 2016, when he helped his boss depict Democrats as elites seeking to “decimate” America through immigration. This time around the targets have expanded beyond Mexicans and Muslims to include Black Lives Matter protesters and their allies. The Trump campaign’s strategy is to cast the president’s opponents as an existential threat to the nation.

The term “cancel culture,” used throughout the Republican convention, lumps together and demonizes critics of white male supremacy, in an attempt to silence them. The use of the term in this context allows the far right to dictate the terms of the conversation, as does the news media’s reluctance to call Mr. Trump and his chief adviser what they are: traffickers in hate, pushing a white nationalist agenda through narratives about national identity, prosperity, and security.

Mr. Miller seeks to re-engineer immigration into this country to keep brown and Black people out, because he sees them as threat to America’s prosperity and national security. It explains why his policies disproportionately affect migrant families from Latin America and Africa, and why the federal government is using force against anti-racist protesters in cities run by Democrats.

This obsession with the supposed dangers of people of color, particularly immigrants or left-wing extremists, ignores reality. Right-wing extremists have committed the most terrorist attacks in the United States since the 1990s.

Officials say that a 17-year-old named Kyle Rittenhouse opened fire on people during a protest in Kenosha, Wis., on Tuesday, killing two and wounding a third. Mr. Rittenhouse, a supporter of Mr. Trump and the pro-law enforcement “Blue Lives Matter” movement, traveled to Kenosha from his home in Antioch, Ill., in response to online appeals from a right-wing militia group to “protect” businesses, property and lives from “rioters,” investigators say.

Last August, a gunman drove to a Walmart in El Paso, targeting Hispanics in massacre that left 23 people dead. The man charged in the killings, Patrick Crusius, wrote an anti-immigrant manifesto that spoke of a “Hispanic invasion of Texas,” mirroring Mr. Trump’s characterization of migrants from Central and South America as perpetrating “an invasion of our country.”

False Black and brown crime statistics are a common recruiting tactic in white supremacist circles; the website American Renaissance, which Mr. Miller also promoted through Breitbart, pumps out misleading statistics characterizing people of color as more prone to violence. These words take on a life of their own and serve to further radicalize an already divided citizenry.

Mary Ann Mendoza, an “angel mom” whose son was killed by a driver who was in the United States illegally, was scheduled to speak at the Republican convention. She was dropped from the convention lineup after she retweeted an anti-Semitic QAnon conspiracy theory. Mr. Miller has repeatedly given her a platform from which to spew fabricated migrant crime statistics that inaccurately paint migrants as more innately violent than citizens.

As Mr. Trump increasingly adopts the playbook of white supremacists, a new solidarity is emerging among white, Black, brown and other groups as they confront the growing threat of right-wing extremism together. The Joe Biden-Kamala Harris ticket reflects this new solidarity.

“Trump knows that if we find real solidarity, it’s a wrap,” said Aida Rodriguez, an Afro-Latina activist. “We’re all waking up to it, and you’re going to see it in November.” These alliances are a real-life manifestation of the mob of Mr. Miller’s nightmares. But that “mob” will not destroy America, as he imagines. It will destroy the white supremacist fantasy he and so many others live inside.