Opinion: Trump and Kushner Should Be Prosecuted For Crimes Against Humanity 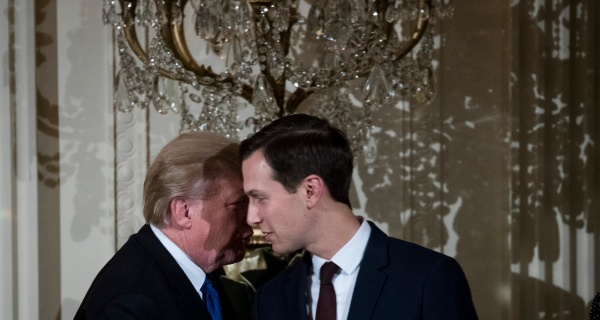 They have let the pandemic rage on because it’s mostly killing people in blue states.

Last month, I wrote that President Trump had admitted to a crime against humanity. It was true. The president had openly bragged about deliberately slowing down COVID-19 testing for political gain, thereby causing the deaths of untold numbers of Americans to make himself look better. It is a monstrous crime for which he has not yet been held accountable.

But a new report from Vanity Fair implicates both Trump and his son-in-law Jared Kushner of an unspeakable horror order of magnitude greater. Instead of implementing a comprehensive and aggressive national testing plan as originally recommended by the White House coronavirus task force, Kushner scuttled it. The president and his son-in-law were instead content to allow tens of thousands of Americans die as long as they were mostly people of color, and hailing from Democratic states and counties. Not only that, they saw it as a political opportunity to both cull the numbers of opposing voters and lay blame on Democratic governors at the same time:

Against that background, the prospect of launching a large-scale national plan was losing favor, said one public health expert in frequent contact with the White House’s official coronavirus task force.

Most troubling of all, perhaps, was a sentiment the expert said a member of Kushner’s team expressed: that because the virus had hit blue states hardest, a national plan was unnecessary and would not make sense politically. “The political folks believed that because it was going to be relegated to Democratic states, that they could blame those governors, and that would be an effective political strategy,” said the expert.

That logic may have swayed Kushner. “It was very clear that Jared was ultimately the decision-maker as to what [plan] was going to come out,” the expert said.

Should we believe this report? Maggie Haberman of the New York Times casually confirmed the gist of it, which only raises further questions about why the Times did not report with more alarm on the details:

If this is true–and there is very little reason to doubt its veracity, despite the White House press secretary’s denials–it would constitute perhaps the greatest crime against humanity of any president in American history. Andrew Jackson’s Trail of Tears was more deliberately vicious and murderous; George W. Bush’s immoral war of choice in Iraq killed more people overall.

But no American president has ever betrayed his oath of office more profoundly than in deliberately allowing the deaths of more than 150,000 of his own fellow citizens and counting for partisan political gain.

We even lack the vocabulary to describe it. “Gross negligence” doesn’t reach the level of the crime. “Murder” is lurid, but frankly not comprehensive enough in scope to describe the death of 150,000. “Treason” comes to mind when considering that the President of the United States knowingly allowed 150,000 Americans to die because they were mostly his political opponents–but despite his Russia entanglements, there is no direct evidence he did so on behalf of a foreign power.

But there’s another option: “genocide.” The known racial bias of the deaths overlaps with the political bias–black and brown Americans tend to be Democrats and live in Democratic areas, and are disproportionately falling victim to the virus–which in turn would make “genocide” the most compelling way to describe what Trump and Kushner have done.

Genocide. Yes, it sounds preposterous. It sounds like the hyperbole of the deeply unserious. But what else can you call it? No word is perfect, but the crime must have a name that fits the enormous scope of its evil. It must describe what actually happened. And what happened is that the president and his son-in-law deliberately allowed 150,000 (and counting) Americans to die of a pandemic, because it would mostly kill off their political opponents. Because it would kill off mostly poor people of color. Because they thought they could gain an upper hand by blaming opposing governors. But they thought it would advantage them politically. It’s like a plot out of a bad action movie with a comic book villain, except it’s real life and those villains are still governing and making decisions.

When the founders named “high crimes and misdemeanors” as the basis for impeaching a president, they chose the phrase because it was deliberately vague: it would be impossible to write a law to cover every possible abuse of power by a deranged executive. They expected the Congress to respect its own authority and the health of the country enough to know when a relevant “high crime” or “misdemeanor” had taken place.

The problem now is that this president has already been impeached, there isn’t time or appetite to impeach him again, and the Senate controlled by the president’s party refuses to act out of political cowardice and self-interest. Moreover, the phrase “high crime” doesn’t really do justice to the scope of the evil of which the president is reportedly guilty.

This is a crime against humanity. A crime so profound we may not have a law to cover it. A crime with international implications, one so vast it may require an international court.

But somehow, someway, it must be prosecuted. The majority of Americans, the ones not enthralled by conservative infotainment and the Trump propaganda machine, are suffering from years of collective trauma and looking forward to the November election as a means of escape. One can hardly blame them. Nor would many be to blame for wanting to put this entire era behind us and never look back.

But assuming democracy remains intact and Trump is driven from office, this enormous crime cannot be forgotten. It cannot be ignored. There must be accountability for this genocide, the greatest crime in American history.