Sen. Ron Wyden: Trump Sent Federal Agents To Portland To Help With His Political Agenda — Not The Protests 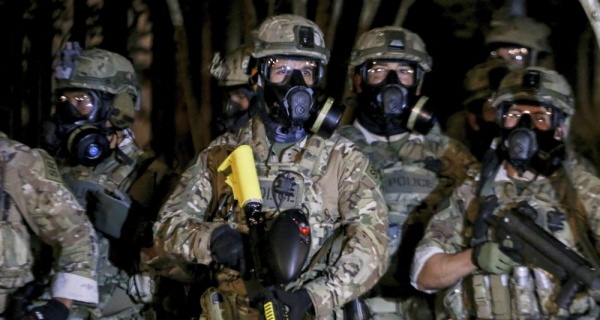 The actions of the federal government to quell local protests demanding policing reforms show that reforms at DHS are sorely needed as well.

For weeks now, Donald Trump has seemingly sought to incite violence on the streets of Portland.

Not content with simply dropping squads of federal agents into my hometown to clash with peaceful protesters, as he first did in early July after signing an executive order to supposedly protect monuments from protesters, Trump and his acting secretary of homeland security, Chad Wolf, have now unleashed these agents like an occupying army — complete with fatigues, military-style equipment, and tactics that are utterly unacceptable in an American city.

These invaders are mounting this assault against my city on the flimsiest of justifications: While Acting Secretary Wolf rants about law and order, most of the incidents of "violent anarchists" he cites are actually graffiti or low-level vandalism.

I condemn violence by anyone, and, as in many other cities, we have real problems we need to fix. That is why I spent much of the last week in Oregon, working to reduce tensions on the streets by coming up with peaceful solutions to address the concerns highlighted by protesters. Oregon communities are taking the lead in using unarmed responses to mental health crises, offering more professional, compassionate mental health care to people that is less expensive than relying on traditional law enforcement tactics.

But the federal agents who have been parachuted into Portland are creating more problems, not solving any of them.

On July 11, a federal agent shot a peaceful protester in the head with a crowd-control munition, sending the man to the hospital with a fractured skull. On Wednesday, videos captured men in fatigues jumping out of unmarked vans and grabbing people off of the street without explanation. And agents from Customs and Border Protection and the U.S. Marshals Service have since ramped up aggressive tactics against demonstrators in downtown Portland.

Right-wing media and members of Trump's administration have long tried to market a fun house mirror version of the city I love. In their telling, Portland is a lawless wasteland, where roving bands of anarchists are re-enacting "Mad Max" every night after dark. Until the federal agents began engaging in violent tactics to end protests, nothing was further from the truth. Portland is struggling with the economic disaster of COVID-19, but Portlanders love our city for its vibrant creativity — and, by the way, crime in Portland has actually been lower than average in recent weeks.

It seems that, because liberal Portland in blue Oregon is not the violent wasteland the far-right echo chamber imagines, Trump and his flunkies are determined to bring violence to us.

It is not surprising that among agencies tasked with occupying Portland against the wishes of our residents and elected officials are tactical units from Customs and Border Protection — the same agency that is still detaining innocent children at the border as a cruel political ploy. Under Trump, Homeland Security and its leaders spent four years refining their violent tactics against immigrants across the country, snatching people off the street and arresting them in federal courthouses without explanation. DHS agents even once held an American citizen — and a veteran, no less — for a month, even though he had proof of citizenship.

Is it any wonder that this is the agency being used in Portland to create more twisted political stagecraft at Trump's behest?

Oregon Attorney General Ellen Rosenblum is right to challenge the legality of what Trump is doing in Portland: The Trump administration's claim that DHS police are needed to enforce the president's executive order to protect statues is laughable. Terrorizing peaceful protesters and arresting people for graffiti and other nonviolent offenses has nothing to do with securing federal property.

My colleagues and I in the Oregon delegation have demanded that these occupying troops leave Portland, demanded answers from the administration and called for an independent investigation. And this week, my fellow senator from Oregon, Jeff Merkley, and I will introduce a measure to require Trump to remove these unwanted forces from our city.

But from a broader perspective, the high-profile law enforcement killings of Black Americans have sparked a long-overdue conversation about reforming policing and improving public safety in recent months — and what's happening in Portland shows that limiting the authority of federal agents at DHS is sorely needed as well.

I'd remind anyone participating in this shameful occupation of an American city that they cannot hide behind Donald Trump forever. The willingness of officials to participate in such a flagrant abuse of power exposes a rot that goes deep into the agency, and that rot must be removed.

To start, any official who signed off on this unconstitutional operation will be identified and held legally responsible. The militarization of DHS must be ended. And the absurd expansion of authority must be reversed. Our border and customs agencies must and will be restricted to securing the border and stopping smuggling, while more appropriate agencies handle refugees, asylum-seekers, and others seeking help.

This is about more than just Portland. Americans have already seen how Trump callously used force against peaceful protesters in Lafayette Square just so he could hold a photo op. Clearly, there must be fundamental reform of how these forces can be deployed and a commitment to holding people accountable for participating in illegal attacks against Americans' constitutional rights.