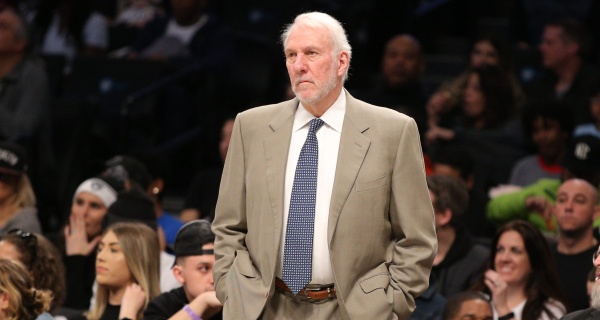 “Shut up and dribble.”

Those four words sum up the attitude of Donald Trump and his acolytes toward athletes who speak out when the president uses sports to ferment racial animosity and rile up his base.

LeBron James, who has a new group with other sports stars designed to protect and inspire the black vote, dunked on Laura Ingraham the other week. He tweeted: “If you still haven’t figured out why the protesting is going on. Why we’re acting as we are,” it’s because of the utter fatigue with disparities such as this: Back when King James told ESPN in 2018 that Trump did not care about the people, comparing him to a bad coach, Ingraham commanded him to “Shut up and dribble.”

But Ingraham reacted quite differently to Drew Brees’s recent comment (since rescinded) that he would “never agree with anybody disrespecting the flag,” when asked whether players should kneel this season. “He’s allowed to have his view about what kneeling and the flag means to him,” the Fox anchor said.

The classic 1968 Esquire cover of Muhammad Ali shot through with arrows comes to mind as we watch the dynamic between sports and politics become more torrid in this season of racial pain and introspection. The two indelible images of this American chapter are a quarterback kneeling on the turf to protest police brutality and a policeman kneeling on a man’s neck in a rancid display of that brutality. (Trump’s new campaign ad mocks Joe Biden for kneeling.)

I’ve been trying for three years to talk to Gregg Popovich, the coach of the San Antonio Spurs and the U.S.A. Olympics basketball team. At 71, he’s an N.B.A. legend who has long called race “the elephant in the room” and argued that we are all just an “accident of birth.” He’s a passionate Trump critic thriving in a red state.

He graduated from the Air Force Academy with a degree in Soviet studies and a yellow Corvette and toyed with the idea of a career in military intelligence. He’s a celebrated curmudgeon with sports reporters and an oenophile.

Raised by a steelworker and a secretary at the Inland plant in Gary, Ind., Popovich is as open-minded, principled and curious as Trump is narrow-minded, unprincipled and incurious.

“Pop,” as he’s known, is very private, but he finally agreed to pop off on a phone call. He wouldn’t pose for a picture, however, explaining that he should not be the focus.

He has spent 25 years in a dialogue about race with his teams. He took players to see “Hamilton” on Broadway, Ava DuVernay in L.A., the African-American Museum in D.C. and the National Civil Rights Museum in Memphis. He gave players copies of “Between the World and Me,” by Ta-Nehisi Coates.

But in recent calls with the Spurs’ players and staff he has been amazed at the level of hurt.

“It would bring you to tears,” he says, his voice cracking. “It’s even deeper than you thought, and that’s what really made me start to think: You’re a privileged son of a bitch and you still don’t get it as much as you think you do. You gotta work harder. You gotta be more aware. You gotta be pushed and embarrassed. You’ve gotta call it out.”

He tells of a recent Zoom town hall with Spurs employees. “A black mother said, ‘My son is angry with me.’ I said, ‘Why?’ and she said, ‘Well, because he’s 16 and I’m basically lying to him and dragging my feet and giving him excuses because I don’t want to take him down to the D.M.V. to get his driver’s license because I don’t want him in a car.’ So her own son is angry with her for that but doesn’t realize that she’s scared to death for him.”

I wonder if the former Air Force officer thinks the law-and-order militaristic approach can work for Cadet Bone Spurs in the campaign.

“I honestly do,” he says. “I feel badly for the military around Trump because they’re dealing with the guy who is the poster boy for the aggrieved wannabe. And he’s taking it out on the world and it’s ruining our country.”

About Trump’s refusal to consider renaming military installations named for Confederate leaders, Pop says of U.S. soldiers, “They didn’t go to war for General Bragg; they went to war for our country.”

About Roger Goodell’s mea culpa that the N.F.L. was wrong for not listening sooner to players who wanted to speak out and protest — an apologia he made without mentioning Colin Kaepernick’s name — Popovich is skeptical.

“A smart man is running the N.F.L. and he didn’t understand the difference between the flag and what makes the country great — all the people who fought to allow Kaepernick to have the right to kneel for justice,” he says. “The flag is irrelevant. It’s just a symbol that people glom onto for political reasons, just like Cheney back in the Iraq war.”

He continues about Goodell: “He got intimidated when Trump jumped on the kneeling” and “he folded.” Popovich says it is analogous to Republican lawmakers who support Trump out of fear “that they’ll get tweeted out of their office and not get elected the next go-round.” Don’t Tom Cotton and Lindsey Graham have people at home they are embarrassed to look in the eye, he ponders.

What does he think about the fact that seven N.F.L. owners, including Jerry Jones and Robert Kraft, each gave a million to Trump’s Inaugural Committee?

“It’s just hypocritical,” he replies. “It’s incongruent. It doesn’t make sense. People aren’t blind. Do you go to your staff and your players and talk about injustices and democracy and how to protest? I don’t get it. I think they put themselves in a position that’s untenable.”

When he trashed Trump soon after the election, the suits at the Spurs told him people were turning in their season tickets.

Is he worried about starting to play again on July 30 at Disney World, with that other plague still on the loose?

He passes the ball to Adam Silver, the smooth N.B.A. commish.

“Ah, the Covid,” the coach murmurs. “I’m just counting on Adam to make sure we’re all safe.”