Opinion: Trump Has Convinced His Supporters That It Is ‘Normal’ To Just Move On And Accept COVID-19 Deaths: Conservative 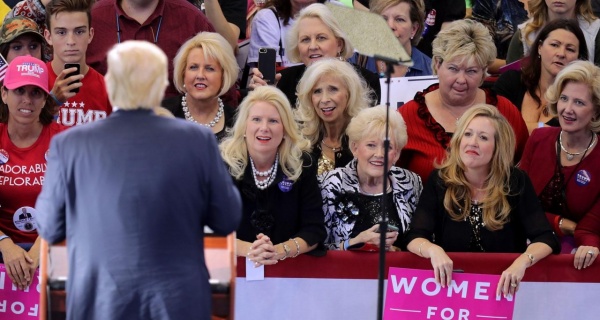 No, Donald Trump didn’t literally shoot anybody, nor did he do it on Fifth Avenue. But soon more than 100,000 Americans will be dead from COVID-19, and making good on his boast that he could get away with murder in broad daylight, his supporters are working their way toward accepting and excusing this disastrous outcome.

Trump understood his supporters earlier than anyone else. It was January 2016 when he proclaimed, “I could stand in the middle of Fifth Avenue and shoot somebody, and I wouldn’t lose any voters.”

He was right. There has proven to be nothing his core supporters won’t excuse to keep from having to admit that they were wrong.

At this point, that means stubbornly, and even insistently, welcoming mass death.

A recent video cobbled together from clips from Trump’s press conferences highlights how the president has gone from dismissing the tiny number of COVID-19 cases and claiming it would all go away in a few weeks, to acknowledging higher and higher death tolls, to boasting that it will be a big success if only 90,000 people die, and more recently just admitting that there will be at least 100,000 deaths—which at the current rate is a lower bound. That’s more than any other nation in the world, probably including China, even if you assume that their official numbers are dramatically undercounted.

The point of the video is not merely that Trump is in denial. We know by now that he says whatever he thinks will make him look good at and for that moment. He lives in an eternal present where what he says today does not have to be consistent with what he said yesterday and bears no relation to what he will say tomorrow.

But the deeper and more ominous point is that Trump has gradually acclimatized himself and his supporters to the fact that a lot of people are going to die and that they are not taking even the basic steps necessary to prevent it.

This has been the pattern all along, the method by which Trump gets his supporters to accept his proverbial Fifth Avenue shootings:

*First insist it’s not real, that he didn’t do it, that it’s all a hoax.

*Then admit it’s real but it’s being overblown and taken out of context by the media.

*Then defiantly proclaim that sure, of course, he did it. It’s normal, it’s perfect, it’s what everybody does, so why are you making such a big deal out of it?

All of this was previewed, in detail, by last year’s impeachment trial, from the assurance that there was no quid pro quo with Ukraine to the insistence that of course there was a quid pro quo, and that’s just fine.

Except this time it’s about a lot of people dying, and dying unnecessarily.

That the administration was caught flat-footed by this pandemic is not its real sin. Most countries flailed early on. The only large country to do well right out of the starting gate was South Korea—but that was because they flubbed their response to a previous outbreak of MERS and learned the lessons from it. Yet we now have about a half dozen examples of COVID-19 success stories, countries that have contained the virus and limited its spread, making it possible for them to avoid both massive death tolls and draconian, open-ended economic shutdowns.

There’s South Korea, New Zealand, Australia, Hong Kong, Iceland, Germany, and a few others, depending on how you count. These results are not surprising. The standard practice for controlling infectious diseases is well established: massive testing to support a system of contract tracing. This allows a country to identify and isolate those who are infectious, making it possible for everybody else to go back to relatively normal lives.

Consider the big recent coronavirus news out of South Korea: 13 new cases identified when a 29-year-old man noticed symptoms and tested positive after an evening going to nightclubs.

There are three things to note about this story.

First, people were going out to nightclubs, which had recently been reopened. They may be shut down again for a while after this, but schools and baseball leagues are opening up. South Korea was never shut down as tightly at the US and will soon be much more open.

Second, there is enough testing to spot a potential “super-spreader” right away.

Third, South Korea has a system of contact tracing so thorough—visitors to nightclubs, for example, are required to give their names as they enter—that everyone who was potentially exposed will soon be located and tested as well.

This could have been us. It could still be us if the Trump administration would put forward a concerted effort to implement this model. It has not done so, leaving it to be implemented piecemeal by the states. Michael Brendan Dougherty aptly describes the administration’s promised response to COVID-19 as “vaporware”:

We’ve gotten lots of advertising and an implicit promise of a world-class operation to fight the disease. But it doesn’t exist yet and it’s becoming clearer that the White House is spinning its wheels, looking for something—anything—to do other than solving the crisis at hand.

Trump’s supporters have sensed that he has given up doing anything about coronavirus, and they have decided to excuse that, too.

This explains some of the excitement over the Swedish model for dealing with the pandemic, which involves less stringent lockdowns and less social distancing. But there really is no “Swedish model,” not as a strategy for containing the virus or reducing its death toll. Swedes are not social distancing enough to slow the spread of the virus, they’re not working toward test-and-trace, and they deny that they are trying to achieve herd immunity. They have no strategy except to grit their teeth and endure whatever happens.

The real Swedish model is simply to decide that they are willing to accept a large number of deaths. Given that this is now President Trump’s strategy, you can see why conservatives are rushing to embrace it.

None of this is necessary. Yes, a test-and-trace system would be very difficult to implement, particularly this late in the pandemic. It would require a vast effort. But it will never happen if we don’t even try—and gosh darn it, this is America. We have never accepted that we are less capable than other countries of doing difficult things. If we accept it in this case, it will be because the president decided not to bother doing the work.

As the death tallies rise and tick into six figures, it is important to remember that this was a choice, even if it was made by default. The president didn’t shoot those 100,000 people, but he embraced their deaths through his indifference and neglect.

It was all done in broad daylight, and his supporters are now ratifying that decision.