Opinion: The Party Of The Aggrieved 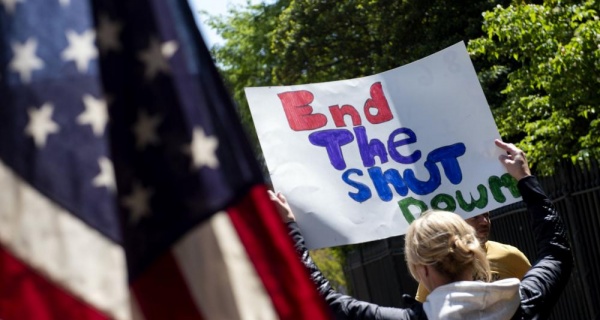 The pandemic has revealed the animating forces of the Republican Party in the age of Trump.

The day after announcing guidelines the nation’s governors can use to carry out an orderly reopening of their states, which are in the grip of a pandemic, President Donald Trump—through his weapon of choice, Twitter—openly encouraged protests against the social-distancing restrictions that have saved tens of thousands of American lives.

As The New York Times reported, in so doing, the president appeared to be “ceding any semblance of national leadership on the pandemic, and choosing instead to divide the country by playing to his political base.”

“They’ve got cabin fever,” the president said of the protesters. “These are great people,” according to Trump. “These people love our country.”

The number of protesters at these rallies has varied from a few dozen to a few thousand. The importance of the protests isn’t so much their size but rather what they symbolize. It is a mistake to dismiss them.

The protests have become a rallying point for the right, encouraged by talk-radio and Fox News personalities such as Laura Ingraham, Jeanine Pirro, Tucker Carlson, and Brian Kilmeade. The anti-social-distancing rallies are drawing comparisons to the early days of the Tea Party movement.

Stephen Moore, who serves on Trump’s economic council to reopen the country, said, “So this is a great time, gentlemen and ladies, for civil disobedience. We need to be the Rosa Parks here, and protest against these government injustices.”

Even if one believes that some of the measures being put in place are too restrictive, this is hardly a Rosa Parks moment. The protesters, for their part, are not distinguishing themselves by making finely calibrated points about epidemiology or offering up more refined social-distancing plans. They are lashing out in frustration and in anger, frustration and anger that is being incited by the president and many—although not all—of his acolytes on the right.

Trump’s eagerness to light the fuse is nothing new; it’s simply the latest manifestation of the president’s disordered mind, which I have written about before. He finds satisfaction not in resolving conflict, but in increasing it. That has been true for much of his life and all of his presidency.

In the midst of a lethal pandemic, Americans are striving for social cohesion and solidarity. They may yet achieve it, but if they do, it will be in spite of this president, not because of him. Trump is doing everything in his power to divide us, to keep people on edge, mistrustful and at one another’s throats. To that end, he will even cheer on people who are violating his own administration’s social-distancing guidelines.

But there is also a method to Trump’s madness. From the moment he took office, the president has pursued a base-only strategy. Rather than trying to win over converts, Trump has decided his path to victory in November lies with inflaming his base, keeping his supporters in a state of constant agitation, even if that requires framing “a complex science/policy debate as evil oppressors vs. heroic victims,” in the words of the social psychologist Jonathan Haidt.

And so the president is acting the only way he knows how, but also in a way that resonates with the base of the party. He has succeeded in creating, at least among some significant number of his supporters, an almost cultlike attachment. The response to COVID-19, then, is acting like a CAT scan on the American right. What it reveals is alarming and, for those of us who have been lifelong Republicans, dispiriting.

I need to add, though, that it’s far too simple to say that what occurred with Donald Trump in 2016 and since was a “hostile takeover” of the GOP. Trump—the only known con artist, conspiracy monger, and pathological liar in the 2016 GOP field—gave the base of the party what it wanted, even as he toxified it, amplifying all the worst tendencies of the American right. To what degree Trump fundamentally changed the Republican Party, and to what degree he simply personified what it was becoming, is an impossible question to resolve. What we do know is that the base of the GOP and Donald Trump have now merged. There is no separation. (Trump’s approval rating among Republicans is 93 percent, according to Gallup.) The GOP is as much Donald Trump’s party today as it was Ronald Reagan’s party in the 1980s.

This pandemic and the response to it reveal some important things about the attitudes that animate the Republican Party in the age of Trump.

Trump’s supporters display a deepening mistrust of expertise of any kind, including medical figures such as Anthony Fauci, the director of the National Institute of Allergy and Infectious Diseases. In rallies around the nation, protesters are chanting “Fire Fauci! Fire Fauci!” and holding up signs saying Fauci lied, main street died.

Fauci is hardly perfect; no one could be when dealing with a novel virus-like the coronavirus. But the fact that Fauci is among the most experienced and respected epidemiologists in the world not only doesn’t reassure the protesters; for some number of Trump supporters, it is further reason to doubt him, since he must be part of the so-called deep state, which they view as implacably opposed to the president.

One person I know, who is very sympathetic to Trump and Trump’s supporters and is in constant touch with them, told me yesterday that the people he was hearing from felt a sense of solidarity with the protesters. (This individual asked for anonymity to speak candidly about these conversations.) Trump’s supporters took the president’s previous embrace of such guidelines as evidence that he was “being bamboozled by ‘deep-state actors’ like Fauci,” this person told me. “The natives are getting restless.”

During the pandemic, Trump supporters have relied heavily on Fox News and talk radio, which can be fountains of misinformation. The pandemic has deepened their grievances and tribalistic loyalties. And we’ve seen how eager many of the president’s supporters are to imagine themselves as heroic figures in a make-believe drama, as if demanding the right to go to a bowling alley or a nail salon during a pandemic makes them modern-day Thomas Paines.

But what may be most unsettling just now is this: At a moment when states and local communities are trying to work together, when many churches and religious communities are seeking to be agents of support and healing, when health-care workers are risking their lives to save others, the president and many of his most devoted supporters are fomenting chaos, division, and antipathy. They want COVID-19 to be the latest battlefield in a never-ending culture war.

This is particularly worrisome because while some crises can unify a nation, pandemics have historically caused people to turn on one another. At the very moment we need as our national leader a person who can break down the dividing walls, who can strengthen our bonds of affection for one another, we have a president who is temperamentally determined to annihilate comity, a spirit of grace and self-giving, and feelings of empathy and compassion.

At least as worrisome is the president’s ability to marshal an army of supporters who model themselves after him, who take his lead, and who allow their sensibilities to be shaped by his.

There are exceptions, of course. Some Trump voters who strongly support his policies tell me they are disgusted by his ethical transgressions and antics. I know, too, Republican lawmakers who, in private, speak quite harshly about the president. But the justifications and rationalizations are getting a bit tiresome as Trump confirms with every passing day some of the gravest concerns about him—psychological, emotional, cognitive, and moral. He is a badly damaged soul who draws energy by acting in ways that are degrading and dishonorable.

This is hardly a secret, and yet almost everyone in his own party—with a few honorable exceptions, such as Utah Senator Mitt Romney and Maryland Governor Larry Hogan—are complicit in the president’s desecrations. Donald Trump has broken them.

It may seem paradoxical, but those who care most about the future of the Republican Party need to hope for the defeat of this Republican president.