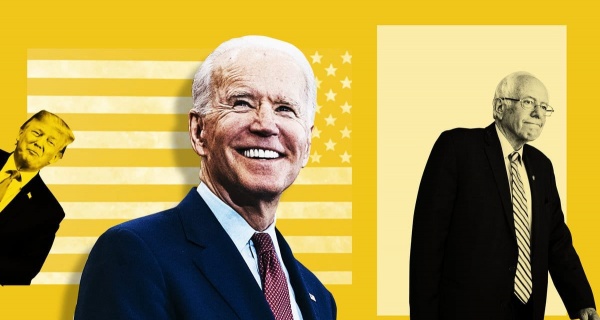 Never let up. Never stop reminding voters that both the deaths and the economic depression we’re entering are a disaster of Trump’s making.

Comrade Sanders was a fast track to Trump holding on to Ohio, Michigan, Wisconsin, Pennsylvania, and his new home state of Florida on his way to winning 40-plus states.

Instead, Donald John Trump will face Joseph Robinette Biden in the fall, and he is not happy about it.

For once, the gods of political felicity smiled on the Democratic Party on Wednesday as Sanders ended his last campaign. As Trump’s re-election insurance policy, Bernie would have delighted the culture warriors, the agitprop farms, and the more established conservatives who could finally say, “Well, Trump may have problems, but I mean, Bernie.”

Trump spent months boosting Bernie—and will continue to try to stoke the Bernie base into a state of righteous fury, hoping for a repeat of what happened in 2016 when just over 12 percent of Bernie voters cast their ballots for Donald Fucking Trump. Bernie’s not being a Democrat is a sore spot for the, you know, Democratic Party; some of his voters hate a centrist Democrat in the way Trump’s media ball-washers hate a Never Trumper and wanted to fuck over Hillary Clinton while others wanted to hasten the revolution. Still, most of them are just—to use a term of political art—nihilist ***holes.

No, Trump did not want to face Biden, and for once, the devil’s luck failed him.

Bear in mind that Trump gambled his presidency on an absurd and clownish ploy led by Rudy Giuliani and a comically inept crew of fuckwit thief-in-law wannabe mobsters and was impeached for his troubles. That’s how much he fears Biden. He worries that Biden’s appeal in the suburbs of places like Pennsylvania, Ohio, Wisconsin, Michigan, and Florida is a non-trivial factor and that Biden will end up bringing Barack Obama off the bench for this fight.

Biden’s brand runs deeper than Trump is comfortable with, and even Biden’s weaknesses aren’t easy targets for Trump’s arsenal of attacks.

Joe Biden is goofy. Has Donald Trump looked in the mirror?

Joe Biden shoots from the lip. Trump alternates between his pound-of-Xanax prompter trance and his stream of excrescence riff-a-paloozas where White House aides nervously eye the exits. He’s barely cogent on bad days, and once drawn outside his narrow comfort zone scans as a lunatic trying to convince the local cops that the bones in his crawlspace are just something his buddy Steve Bannon left behind.

Biden’s path to beating Trump isn’t the same as winning the Democratic primary. It’s not the same as any election he’s ever seen. Joe Biden is in a fight with someone without morals, a conscience, or anyone to restrain him. His opponent will lie, cheat, rely on foreign help to win, attack Biden’s family, and unlike Biden, he’ll do it with a propaganda megaphone of unrivaled reach and power.

To beat Trump, here are just a few of the things that Biden needs to do:

Trump Is COVID. COVID is Trump.

Every re-election campaign is a referendum on the incumbent. Every. Single. One. This is no exception.

This race was going to be a referendum on Donald Trump’s corruption, cruelty, incompetence, and status as the world’s top shitbird. All those things still obtain, but the Biden campaign needs to understand the weapon Donald Trump put in their hands.

Donald Trump is responsible for two months of deception, delay, and denial about the death toll COVID-19 is taking on our nation. Biden needs to hang every damn death around Trump’s neck. Every doctor, every nurse, every frontline health-care worker knows the toll his inaction took. Donald Trump’s decisions have already helped kill 15,000 Americans; never let voters forget it.

America knows what Trump is now. They’re seeing the cost in lives and treasure. They know the limits of his pond-shallow intellect. They know he’s an ineffective leader, unable to step up to the serious work of an important moment. His performance is pathetic, the results tragic. Biden must never, ever let this go.

Trump is rapidly and continually trying to rewrite history, and the core mission of the Biden comms and media effort in the coming months is to make voters understand the true nature and consequences of Trump’s disastrous leadership.

Trump’s collapsed economy is all his. Biden should be raising holy hell that the president and Mitch McConnell are still focused on bailing out Wall Street—the only metric Trump really cares about—as average Americans are getting fucked.

Bernie is gone. Finito. Kaput. Joe Biden is the Democratic nominee in all meaningful respects, and he damn sure better start acting that way. Start acting like the president. Offer alternative courses of action. Respond to the hundred opportunities a day that the COVID-19 crisis offers to get in front of cameras and reporters and talk.

Trump functions by darkening the sun. He tweets. He picks fights he knows the media will cover. He talks to reporters off the record constantly—including the ones he blasts on Twitter and at press conferences, which amid this pandemic have become a sick show meant to command the entire media frontier.

Biden needs to get better, fast, on both earned and social media. Let the man tweet, people. He needs that authentic engagement—with a little adult supervision—and to begin rigorously counterprogramming the Trump show. Biden needs to do more press, and I know his advisers think this is risky, but this battle will be joined in the earned media space. You’ll never get coverage to rival Trump until you get out there and commit news.

It’s a tough lift, I know, but it’s where much of this battle will be fought.

Donald Trump and his allies bet the Ukrainian farm on turning Hunter Biden into a radioactive campaign issue, and even though it failed, that’s no reason they won’t bring it up again.

Shamelessly and brutally and falsely.

The trick here isn’t to launch into an endless defense of Hunter. The trick is to go on the attack, and go hard. Go after Ivanka’s China copyright deals. Daddy’s little angel is a sociopathic chip off the Trumpian block, and his weird feelings toward her (“So that’s how it is in that family”) will lead to his over-reaction.

Go after the failsons and sons-in-law, starting with Jared’s Persian Gulf bailout. Don’t spare Donald Trump Jr. These scuzzy griftbots are raking in money off the campaign hand over fist, and no one is holding them accountable. They’re using the hotels to launder lobbyist money back into Trump’s pockets. There’s enough oppo here for a hundred campaigns.

Biden just needs to be bold enough to use it, and strong enough to resist the initial fainting-couch faux outrage when he gives back as good as he got.

Facts and Empathy Are Weapons

Trump’s utter lack of empathy for the dead and suffering is a point of contrast that Biden won’t enjoy making, but should. He was shaped by loss, tragedy, and death in the ways that so many Americans now understand. He can feel the pain Trump’s decisions caused more viscerally, and if he can articulate the two threads, it will be one of the most damning indictments in our political history.

Remind voters that Trump cared about his ratings, not the pandemic. His denials were to keep “his” stock-market bubble inflated and his campaign in motion.

Never let up. Never stop reminding voters that both the deaths and the economic depression we’re entering are a disaster of Trump’s making.

Most campaigns have a few attack lines and avenues that are, to put it mildly, tangential. The referendum now is marked by fresh graves, almost all caused by a president who deceived voters for two months. Biden can do what Trump cannot—show sympathy and emotion for the victims—while keeping the blame laser clearly on Trump.

Be Shameless. Trump Is.

There are no points for nice, now. There are no points for civility or decency when it comes to prosecuting the campaign against Donald Trump. Trump will never, ever do the right or decent thing, and his consultants certainly won’t. He will make outrageous, unsupported claims. He’ll lie constantly, and promote ludicrous conspiracy theories that will make Pizzagate look like Mr. Rogers. Trying to get the media to litigate Trump’s lies is a fool’s errand.

The secret is to hit back harder, and never, ever stop. Every Republican and Hillary Clinton took swipes at Trump with no consistency or follow-through. They thought, “Well, I’ll rip this zinger and that’ll show him.”

Learn from their errors. It doesn’t mean Biden has to be ugly, but he does have to be relentless and recognize there is no bottom. There is no limit. There is no John McCain or Mitt Romney on the other side of this equation. When allies go hard at Trump—and especially when they edge up to the line—don’t apologize. Trump certainly won’t.

I know this will rankle many progressives, but Biden can’t fall into the policy trap. No one gives a fuck about policy. Voters tell pollsters they care, but they’re lying. Obama’s policy fit on a poster. Trump’s fit on a trucker hat. This isn’t a race about policy, because policy is always a snare and delusion, a dead-end at best and a trap at worst. Policy is a smothering lay.

Trust me, the GOP really, really, really wants this race to be about abortion, gun-control, climate change, and whatever else is in the Warren Center for Plans, Policies, and Paperwork. They want to drag this into a familiar frame of the culture wars—libtard know-it-alls vs. ’Merica—and making the race about policy does that work for them.

Even as an empiricist, I have to say that I believe in luck. I’ve seen it too many times in politics to let it pass by unnoticed. Joe Biden got lucky in Bernie leaving the race. He was lucky the way the primary chemistry resolved and his campaign rescued itself from peril.

And honestly, he’s lucky Trump is failing utterly in the middle of the worst pandemic crisis in a hundred years. Biden has a hard and narrow road ahead to win this race, and while luck may not be enough to win on its own, he’s a lot better off than anyone expected six months ago.