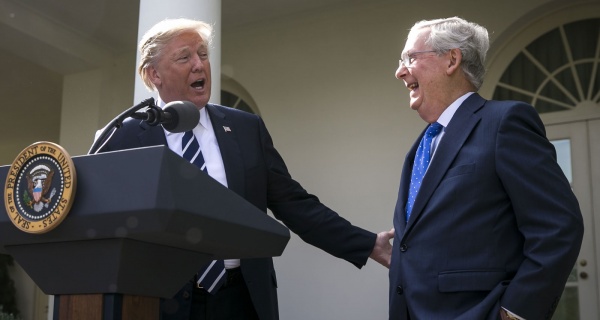 About 99 percent of Americans have no idea who Judge Justin Walker is, and for that they can be totally forgiven. After all, most folks are a little busy these days, what with calling their state unemployment office 143 times trying to get through, or sick with worry about a parent or a grandparent in a nursing home, or just trying to get the damn microphone to work on their fourth Zoom conference of the day.

And this is exactly what President Trump and his utterly soulless enforcer, Senate Majority Leader Mitch McConnell, are going for. But let me help you out here, since they won’t: Justin Walker is a Trump-appointed federal judge who is not qualified for his job — and that’s not me, a liberal hack journalist, talking, but the good people at the American Bar Association. The ABA futilely urged McConnell’s GOP-led Senate last year to reject Walker, noting that the then-37-year-old from McConnell’s home state of Kentucky had zero trial experience, normally considered a prerequisite. The lawyers’ group didn’t even delve into Walker’s extreme right-wing views on issues like health care or executive power, honed in the conservative judicial pipeline, the Federalist Society.

On Friday, when most citizens who aren’t on the front lines of a global pandemic were watching with alarm as the coronavirus death toll on their TV screen churned toward 10,000, Trump and McConnell did the kind of thing that Republicans tend to do with an unqualified 38-year-old judge who’s only been on the bench for less than a year: They offered him a promotion.

In the coming weeks, with as least 10 million and probably many more Americans dazed by sudden joblessness, McConnell plans to probably not deal much with that — but instead wield his Senate power to ram through Walker for a lifetime (40 years or more, given U.S. life expectancy) gig on America’s second most powerful court, The D.C. Court of Appeals, which tends to handle key cases on federal powers.

It’s not clear whether the (and one cannot use this word enough) unqualified Walker’s nomination is another reward for the yeoman’s work he performed in 2018 to cast doubt — in more than 70 media interviews! — on the credible #MeToo allegations of Dr. Christine Blazey Ford against the now-Supreme Court Justice Brett Kavanaugh, who once employed Walker as clerk. Or, instead, maybe it’s just McConnell’s forward-looking dream of making sure that our children and grandchildren are crushed by the same pro-corporate, anti-worker, anti-women, anti-democracy kleptocratic rulebook that Americans suffer under today.

Either way, the idea that McConnell, Trump, and their Republican enablers are so focused on judges now when so many Americans are sick or dying and when so many more aren’t sure where their next meal is coming from, let alone how they’ll pay April’s rent, is a moral outrage that — and yes, this is hard to believe — surpasses the other political abuses of common decency we’ve grown so used to in recent years. And yet it’s arguably not even the most unconscionable move from our government carried out under the cover of mass death.

Let’s call this what it is: a dictatorship of distraction. In Washington, Republicans who control two branches of government and half of the third are now using Americans’ preoccupations with staying alive or staying afloat economically to force down our throats actions that a) have absolutely nothing to do with the coronavirus and b) are opposed by a majority of a populace that’s too beaten down or too isolated to fight back.

It’s hardly a new observation that a catastrophe like a global pandemic tends to be bad news for democracy, and in this current horrific moment we’re seeing some of the world’s worst leaders — most notably Hungary’s Viktor Orbán, who has seized absolute dictatorial powers — use the crisis to find their inner Joseph Stalin. Here in The World’s Greatest Democracy™ that’s not how we roll, but the COVID-19 Moment has allowed for the most-extreme-ever case of The Shock Doctrine — how the brilliant writer Naomi Klein described “disaster capitalism” that jumps on any tragedy to further oppress the marginalized classes.

Consider a few of the things we’ve seen — albeit, barely if at all covered by the news media — in the days that the coronavirus crisis worsened:

In the dead of night, Trump went ahead this weekend with the Friday Night Massacre firing of the intelligence community’s inspector general Michael Atkinson. Even though IGs are supposed to only be canned for wrongdoing, there wasn’t even an effort to spin Atkinson’s ouster as anything but pure, Goodfellas-style revenge for reporting a whistle-blower’s complaint about the president’s impeachable conduct in the Ukraine matter. Trump’s latest high crime or misdemeanor was essentially a two-fer — the kind of abuse of power that McConnell’s Senate essentially greenlighted with February’s acquittal, and also the kind of outrage that the White House probably feels a virus can help them get away with even more easily.

With not nearly enough fanfare, the U.S. Environmental Protection Agency announced that — days before the 50th anniversary of Earth Day, no less — it was going to essentially stop protecting the environment, which was kind of the point of having an EPA. In announcing a suspension of all routine enforcement actions — “How could you possibly worry about some dirty air or water at a time like this?!” — the feds are ignoring the fact that undermanned petrochemical plants, for example, are probably more prone to toxic releases, or that those with respiratory problems caused by pollution are most susceptible to COVID-19. In reality, the EPA is using the death of nearly 9,000 Americans to justify every corporate lobbyist’s lifelong fever dream.

Down at America’s Southern border, which had already been the site of the Trump administration’s worst human rights abuses during its 39 months in office, the government has also used the coronavirus crisis to invoke emergency powers (sounds a little Orbán-esque, no?) that involve suspending our existing laws intending to protect minors or asylum seekers who cross into the United States without documents. While it’s true that a deadly pandemic requires some changes, and that reactions to this one are mixed (you probably don’t want to detain more people while the virus is spreading), who has any faith that America’s authoritarian-wannabe-in-chief is going to relinquish these emergency powers any time in the near future?

Given Team Trump’s underlying hostility to the normal functioning of government, it’s hard to know how many of these moves — halting Title IX sexual-assault probes, for example — are really to keep people safe in a pandemic and how much that it simply never wanted to do those things in the first place. I’d also note that the GOP doesn’t have a total monopoly on bad governance in a time of coronavirus, as neither New York’s status as the world’s epicenter nor Gov. Andrew Cuomo’s resurgent reputation prevented Democrat Cuomo from signing a horrible budget that cuts health care and locks up more innocent people, right when neither is called for.

But right now the coronavirus is a national problem for which the national solutions have so far fallen way short. Congressional Democrats can always do better, but it’s largely McConnell, Trump, and their GOP allies who falsely spin the most worker-friendly solutions to the looming Great Depression II as “liberal social engineering” and not the bare minimum to keep good, decent Americans from starving to death. Meanwhile, Republicans are the ones doing the absolute worst kind of social engineering — “disaster capitalism” to ram right-wing judges onto the bench to save corporations for the next half-century while regular folks are rummaging for pitchforks.

McConnell and the other 534 members of Congress — that’s both parties and both houses — need to end their spring recess ASAP and get back to work on a much larger stimulus package that guarantees that every American will have enough money to live on until this economic catastrophe is over. And there should be a moratorium on anything else — including filling judicial vacancies with unqualified hacks — until that legislation happens.

Voters, meanwhile, should not forget the ghouls who didn’t want to put this deadly crisis to waste when we go to the polls in November — assuming that Trump and McConnell don’t try the ultimate Shock Doctrine maneuver of canceling the election. This may be a low moment for democracy but at least democracy is not totally dead — not yet