Opinion: A President Unfit For A Pandemic 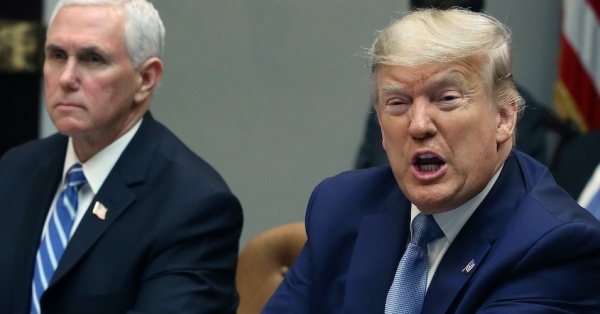 Much of the suffering and death coming was preventable. The president has blood on his hands.

The United States, long a beacon of scientific progress and medical innovation with its world-class research institutions and hospitals, is now the hub of a global pandemic that has infected at least 745,000 people and already claimed more than 35,000 lives worldwide. Now that the number of confirmed COVID-19 cases in the United States — more than 140,000 — has surpassed that of any other nation, Americans are consigned for the coming weeks to watching the illness fell family members and friends, and to fearing for their own fate as they watch death tolls rise.

While the spread of the novel coronavirus has been aggressive around the world, much of the profound impact it will have here in the United States was preventable. As the American public braces itself for the worst of this crisis, it’s worth remembering that the reach of the virus here is not attributable to an act of God or a foreign invasion, but a colossal failure of leadership.

The outbreak that began in China demanded a White House that could act swiftly and competently to protect public health, informed by science and guided by compassion and public service. It required an administration that could quickly deploy reliable tests around the nation to isolate cases and trace and contain the virus’s spread, as South Korea effectively did, as well as to manufacture and distribute scarce medical supplies around the country. It begged for a president of the United States to deliver clear, consistent, scientifically sound messages on the state of the epidemic and its solutions, to reassure the public amid their fear, and to provide steady guidance to cities and states. And it demanded a leader who would put the country’s well-being first, above near-term stock market returns and his own reelection prospects, and who would work with other nations to stem the tide of COVID-19 cases around the world.

What we have instead is a president epically outmatched by a global pandemic. A president who in late January, when the first confirmed coronavirus case was announced in the United States, downplayed the risk and insisted all was under control. A president who, rather than aggressively test all those exposed to the virus, said he’d prefer not to bring ashore passengers on a contaminated cruise ship so as to keep national case numbers (artificially) low. A president who, consistent with his mistrust and undermining of scientific fact, has misled the public about unproven cures for COVID-19, and who baited-and-switched last week about whether the country ought to end social distancing to open up by Easter, and then, on Saturday, about whether he’d impose a quarantine on New York, New Jersey, and Connecticut. A president who has pledged to oversee the doling out of the $500 billion in corporate bailout money in the latest stimulus package, some of which will go to the travel industry in which his family is invested. A president who spent a good chunk of a recent press conference complaining about how hard it is for a rich man to serve in the White House even as Americans had already begun to lose their jobs, their health care, and their lives. A president who has reinforced racial stigma by calling the contagion a “Chinese virus” and failed to collaborate adequately with other countries to contain their outbreaks and study the disease. A president who evades responsibility and refuses to acknowledge, let alone own, the bitter truth of National Institutes of Health scientist Dr. Anthony Fauci’s testimony: that the country’s testing rollout was “a failing.”

Timing is everything in pandemic response: It can make the difference between a contained local outbreak that endures a few weeks and an uncontrollable contagion that afflicts millions. The Trump administration has made critical errors over the past two months, choosing early on to develop its own diagnostic test, which failed, instead of adopting the World Health Organization’s test — a move that kneecapped the US coronavirus response and, by most public health experts’ estimation, will cost thousands if not hundreds of thousands of American lives. Rather than making the expected federal effort to mobilize rapidly to distribute needed gowns, masks, and ventilators to ill-equipped hospitals and to the doctors and nurses around the country who are left unprotected treating a burgeoning number of patients, the administration has instead been caught outbidding individual states (including Massachusetts) trying to purchase medical supplies. It has dragged its heels on invoking the Defense Production Act to get scarce, sorely needed ventilators and masks into production so that they can be distributed to hospitals nationwide as they hit their peaks in the cycle of the epidemic. It has left governors and mayors in the lurch, begging for help. The months the administration wasted with prevarication about the threat and its subsequent missteps will amount to exponentially more COVID-19 cases than were necessary. In other words, the president has blood on his hands.

It’s not too much for Americans to ask of their leaders that they be competent and informed when responding to a crisis of historic proportions. Instead, they have a White House marred by corruption and incompetence, whose mixed messages roil the markets and rock their sense of security. Instead of compassion and clarity, the president, in his near-daily addresses to the nation, embodies callousness, self-concern, and a lack of compass. Dangling unverified cures and possible quarantines in front of the public like reality TV cliffhangers, he unsettles rather than reassures. The pandemic reveals that the worst features of this presidency are not merely late-night comedy fodder; they come at the cost of lives, livelihoods, and our collective psyche.

Many pivotal decision points in this crisis are past us, but more are still to come. For our own sake, every American should be hoping for a miraculous turnaround — and that the too-little, too-late strategy of the White House task force will henceforth at least prevent contagion and economic ruin of the grandest scale. But come November, there must be a reckoning for the lives lost, and for the vast, avoidable suffering about to ensue under the president’s watch.