Opinion: Who Can Beat Trump In November? Here Are The Pros And Cons For Each Democratic Challenger 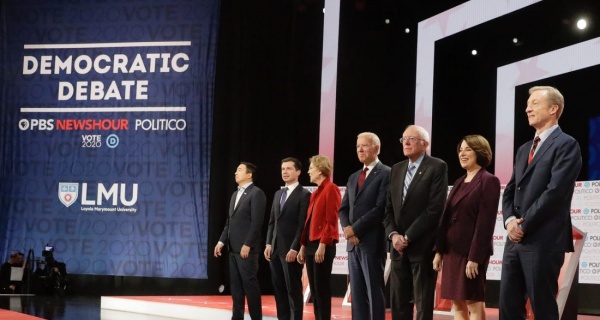 *With the Iowa and New Hampshire contests now behind us, and Joe Biden all but officially finished in this race, how do the remaining Democrats stack up against President Trump?

*Let’s rate them all by the three most crucial criteria: personal persuasiveness, grassroots/emotional support, and Electoral College math.

With the Iowa and New Hampshire contests now behind us, and Joe Biden all but officially finished in this race, how do the remaining Democrats stack up against Trump?

Let’s rate them all by the three most crucial criteria: personal persuasiveness, grassroots/emotional support, and Electoral College math.

The biggest reason why Sen. Bernie Sanders, (I-VT) is now leading the national Democratic voter polls is because he has a strong persuasion game. As he consistently sticks with his socialist message, even many of his biggest detractors give him credit for being genuine and believable. It’s not an insignificant calling card when millions of Americans are convinced all politicians lie and don’t hold any real beliefs. Sanders is the best potential challenger to Trump in this category.

Mayor Pete Buttigieg comes in a distant second here, mostly due to his unthreatening “Mr. Nice Guy” persona. But some of that comes off as inexperience, and Buttigieg has diminished his nicer image a few times by saying Trump voters condone racism. Attacking the voters as opposed to other politicians is a bad persuasion technique, just ask the “deplorables.”

Senator Amy Klobuchar’s suburban mom persona makes her seem persuasive on paper. She’s also appeared to be more of a straight talker in recent debates. But she hasn’t been tested in front of a national audience long enough to garner anything but an incomplete grade so far.

Senator Elizabeth Warren has damaged her own brand and no longer appears to have voters’ trust. Remember that her poll numbers took a big step down after she claimed Sanders told her a woman could not win the presidential election, while Sanders strongly denied saying that. The polls told us which candidate the Democratic voters believed. Her campaign also seems to be about to hit its expiration date.

That leaves Mike Bloomberg at the bottom in this category. Bloomberg has a weak persuasion game, not because of any perceived dishonesty, but because he doesn’t exude the warmth and approachability candidates still needed to connect with voters. There’s a reason why Bloomberg often plays a very small role in his campaign ads, or sometimes doesn’t appear at all.

This test isn’t even close. Sanders has more of an enthusiastic, grassroots following than any Democrat. That’s not only led to wins or near-wins in Iowa and New Hampshire, but it’s also the reason for his impressive and growing fundraising figures. With Trump still jam-packing arenas at his rallies, the Democrats need someone who can counter that enthusiasm. Sanders is the closest to doing that.

Mayor Pete is again a distant second here. But the openly gay Buttigieg has a chance to improve on this if he finds a way to position himself as the kind of transformative candidate Barack Obama was in 2008. For those who think Buttigieg has made his sexual orientation too much of an issue, just remember the now infamous Iowa caucus voter who did not know he was gay and tried to change her vote when she did find out.

Bloomberg’s entire candidacy is basically a test to see if record campaign spending and dislike for an incumbent can translate into an emotional movement. History tells us this is unlikely, even though Bloomberg is spending so much more money than any other candidate in history.

Money has not been able to buy enthusiasm from voters in the past. Is that just because there wasn’t enough money?

Plus, will money be enough to erase the bad feelings from Bloomberg’s comments about black Americans, stop & frisk, and the 2008 mortgage crisis?

Unless the Democratic nominee gets a good turnout from black voters, Trump wins easily.

Warren had a strong grassroots and enthusiastic following for months but lost it as the primaries approached. She can’t match Trump now.

Once again, Klobuchar gets an “incomplete” on this test. But by marketing herself as the more moderate choice, the chances of her drumming up very enthusiastic support seem minimal.

Remember that there is no such thing as a national election in America. That means that whoever tries to defeat Trump in November needs to pick off some of the key states that he won in 2016.

The three most important states Trump swiped from the Democrats, after years of GOP losses in all three of them, were Wisconsin, Pennsylvania, and Michigan. Together those three states add up to 46 Electoral College votes. Throw in the always tight and crucial state of Florida with its 29 votes, and you have the four contests the Democratic challenger is going to have to focus on very heavily to win.

All of that makes Bernie Sanders the weakest contender in this category. In the Midwest states, we’re not likely to see any changes in the pro-Democrat urban areas and the pro-Republican rural districts. So, the results will hinge on suburban voters outside of Philadelphia, Pittsburgh, Milwaukee, and Detroit.

Any Democrat taking on Trump will need to get a good turnout from Democrat and Democrat-leaning middle and upper-middle-class voters in those suburbs.

With his socialist views, Sanders looks dead in the water with that demographic. His message is popular with college students, young singles and poorer voters. But that group will not be enough to carry the day in November.

Florida’s demographics differ dramatically from the Midwest’s, but Sanders will face major problems trying to win a state with so many older voters. He has not been able to appeal to seniors, despite being one of them.

Speaking of Florida, that is a state Bloomberg looks like he could conceivably win against Trump. It’s also the first state where a pre-primary poll shows him ahead of his Democratic challengers.

That alone gives Bloomberg a big edge over all the other Democrats hoping to challenge Trump. Bloomberg will also be able to afford the massive get-out-the-vote operation that could make the difference in November in one or more of those key Midwestern states.

His bigger challenge will be running against Trump in the midst of a strong economy, but that’s an uphill battle for all the potential Democratic nominees.

Coming in second to Bloomberg in this category is Klobuchar. As a Midwesterner who has already won a statewide election, she could connect well with voters at least in neighboring Wisconsin. Almost as importantly, she should be able to keep her home state of Minnesota out of Trump’s hands after it just barely went to Clinton in 2016.

Buttigieg is also a Midwesterner from Indiana, but unlike Klobuchar he’s never won statewide office. Plus, Trump’s huge win in Indiana in 2016 doesn’t look like it can be overcome in 2020. Buttigieg also doesn’t seem to have the kind of economic message or experience to win over blue-collar or suburban voters in Midwestern states. Buttigieg seems weaker than Bloomberg in Florida as well.

So, this leaves us with a split decision. Sanders has the best chance to beat Trump with his messaging and enthusiastic supporters. But Sanders doesn’t have the widespread geographic and demographic support right now to pull off an Electoral College win. Bloomberg can compete in more states and across more economic levels, but he doesn’t have enthusiastic support and may not be able to get out the black vote.

All in all, Trump still has to like what he sees when he looks over the remaining competition.

Jake Novak is a political and economic analyst at Jake Novak News and former CNBC TV producer. You can follow him on Twitter @jakejakeny.