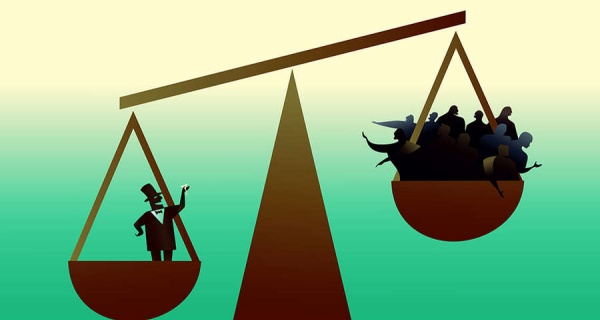 Trump and Republicans have made a strong stock market their economic lodestar. But voters in the heartland and across the country know this is a farce.

The stock market is soaring and setting records, a point that President Donald Trump often notes on Twitter and that he highlighted in his State of the Union address. He sees it as evidence of his administration’s economic success. But the stock market, which is mostly driven by large hedge funds and a small concentration of extremely wealthy individuals, hardly reflects the economic realities experienced by the vast majority of Americans.

As the presidential primaries kick into high gear, the Democratic candidates should focus on exposing the president’s obsession with the stock market and get laser-focused on advancing, once again, a truly balanced economy.

The truth is that America's richest 10% is winning. But the so-called Trump bump is leaving Main Street and 90% of American households behind.

After the financial crisis of 2008 that wiped out nearly $8 trillion in market wealth, there was a marked decline in stock ownership across the country, especially among younger and lower-income people. As median income families experienced a massive drop in their household income and savings, many viewed the then-erratic stock market as a dangerous investment for what little they had left.

During this same period, however, there was no decline in market participation among upper-income Americans. As a result, the richest 10% of households in America gained, directly and indirectly, control of nearly 84% of the value of all stocks.

Nearly half of the country’s households today have nothing at all invested in the stock market.

What led to this perverse concentration in stock ownership?

While everyday Americans, with their savings largely demolished, were left wondering how they were going to afford their mortgages, car payments and groceries, the wealthiest Americans were excited at the prospect of buying low in the stock market and selling high — and they did just that.

Post-2008 stock market activity shows this vicious cycle, with the average American being hurt the most by the downturn and being the last to benefit from the eventual upturn. Since the financial crisis, the top 10% has, in fact, become richer, while median American family wealth has dropped 34%.

Among the most affected by this savings wipeout are the nation’s millennials. Because of the financial crisis, they now hold significantly less wealth — and much more debt — than the two preceding generations held at similar points in their lives. The financial crisis not only stripped millennials of their wealth and savings, but also of the opportunity to invest in their own futures.

Since 2008, the percentage of adults ages 23-38 invested in the stock market has dropped 12 points.

A closer look at the numbers shows very clearly that a historically high Dow Jones index does not equate to or imply widespread economic growth, as Trump and members of his administration continue to tout.

And so, to give a voice to the growing chorus of disenfranchised Americans who have been left behind by “the greatest economy in the HISTORY of America,” Democratic candidates must do a solid job of exposing the myths behind President Trump’s empty economic rhetoric.

Since his first day in office, Trump has made a strong stock market his economy lodestar. And almost the entire Republican Party has taken up the mantle of championing the economic news coming from Wall Street. But voters in the heartland and throughout the country know this is a farce.

A fulsome economy for all is the alternative outcome that the Democratic Party and the candidates vying for the nomination must champion. It also happens to be the way the Democratic presidential nominee will win in November.

Leo Hindery Jr., former CEO of AT&T Broadband, is co-chair of the Task Force on Job Creation, a member of the Council on Foreign Relations and an investor in media properties. The views expressed here are solely his own. Follow him on Twitter: @LeoHindery