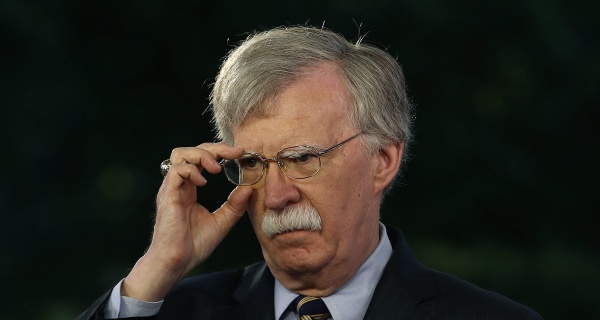 John Bolton never had any intention of testifying in Donald Trump’s Senate impeachment trial. And he knew he would never have to.

Trump’s former national security adviser threw Democrats a sucker punch by pretending that he was noble enough to stand up against his old boss and the entire Republican Party. Turns out, he’s a selfish manipulator — just like Trump. And the American people got played.

Bolton is the only person who got anything worthwhile out of the drama that ensued over his possible testimony. His book sales likely will soar through the roof. And with juicy tidbits already out in the open, he has virtually guaranteed that his book won’t fizzle out as quickly as every other tell-all book about Trump has.

Having worked for Trump, Bolton knew the lengths to which the president would go — even beyond tying a subpoena up in court — to keep him from telling senators what he knew about the Ukraine shakedown.

He also knew it would never get to that point. Bolton had the proof Democrats needed to show that Trump had abused his presidential power by withholding military funding to Ukraine in order to force an investigation into former Vice President Joe Biden and his son, Hunter.

As a political insider, he knew there was no way Republicans ever would get the four votes needed to hear him say it under oath — because such damning information would only make it harder for the senators to explain away the acquittal.

Anyone waiting for Bolton to speak out now that Trump has been acquitted should forget about it. If he were a noble man, he would never have been part of such a corrupt president’s administration to begin with. News organizations are clamoring for an interview. If he had any intention of doing right by the American people, he would have broken his silence by now.

If there was any uncertainty about Bolton’s sincerity, House impeachment manager Adam Schiff helped put it to rest last week during an interview on MSNBC’s “The Rachel Maddow Show.” After Republicans voted against hearing new witnesses, Bolton wasn’t even willing to submit an affidavit.

“After they voted to be the first impeachment trial in history without witnesses, we did approach John Bolton’s counsel, asked if Mr. Bolton would be willing to submit an affidavit under oath describing what he observed in terms of the president’s Ukraine misconduct, and he refused,” Schiff said.

"For whatever reason, he apparently was willing to testify before the Senate, but apart from that, seems intent on saving it for his book. He’ll have to answer for that.”

According to Schiff, Bolton’s attorneys threatened to sue Democrats if they tried to subpoena him to testify before the Congressional impeachment hearings last year.

In their desperation to hear from someone who had firsthand knowledge of Trump’s abuse of power, Democrats seemed willing to ignore who Bolton really is. That doesn’t mean they were entirely taken in by him. In several speeches, Schiff alluded to the curiosity over Bolton’s sudden benevolent change of heart regarding his testimony.

What Bolton wants more than anything — and likely the reason he joined Trump’s administration in the first place — is to have an influential voice in developing and promoting the Republican public policy agenda.

Though Bolton might be on the outs with Trump right now, he will never be a friend to Democrats. A longtime advocate of bombing Iran into submission, he is an outspoken proponent of using military force around the world rather than engage in peaceful negotiations. In that regard, he is the antithesis of most Democrats.

When President George W. Bush nominated him as ambassador to the United Nations in 2005, Democrats despised him so much that they filibustered his confirmation in the Senate. Bush had to wait until the Senate was on summer recess to sneak his appointment in.

While the public doesn’t know how The New York Times learned what’s in a manuscript of Bolton’s book, “The Room Where It Happened,” scheduled for publication next month, it is easy to surmise who benefited most from its release.

According to the Times, Bolton reveals that Trump ordered him to help pressure Ukraine to dig up dirt on his perceived Democratic rival and told him to call President Volodymyr Zelenskiy and urge him to meet with Trump’s go-to guy and personal attorney, Rudy Giuliani.

That’s some powerful stuff. The suspense over whether he would actually get to testify to it under oath increased America’s thirst for more information about what happened behind the scenes. At the same time, the leaked teasers shielded Bolton from a likely public lashing had these details come to light after the trial had ended.

The current drama over whether Trump’s people will try to stop publication of the book by arguing that it contains significant amounts of classified information heightens expectations. There could be no better publicity.

At the same time, Bolton gets to parade around like a whistleblower who was kept, by no fault of his own, from blowing his whistle. When his book does finally come out, it won’t be any help to the American people.

It will be a useless rehash of what we already know about this corrupt president. Maybe we should give the book the shaft the way Bolton gave it to us.