Opinion: 'Being Poor In America Is A Full-Time Job'-The Astronomical Cost Of Banking While Poor 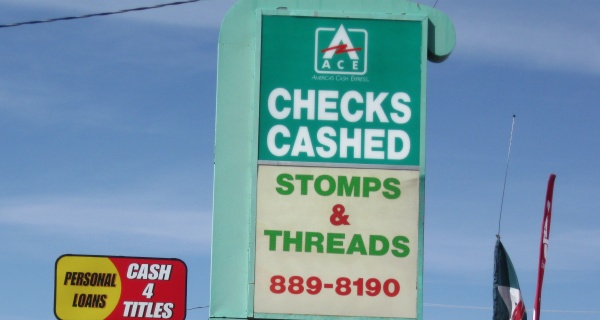 *Paul Constant is a writer at Civic Ventures, a co-founder of the Seattle Review of Books, and a frequent co-host of the "Pitchfork Economics" podcast with Nick Hanauer.

*He says changes like Colorado's Proposition 111, which reduced the annual interest rate on payday loans to 36% annually, show that Americans are ready to get rid of payday loans.

*For more on this topic, listen to the latest episode of "Pitchfork Economics."

Being poor in America is a full-time job. The commutes of poor Americans are often longer than those of middle-class Americans. Buying less expensive, low-quality products — say, a cheap pair of boots with cardboard soles — often results in a larger outlay of money over time than a slightly more expensive and higher quality item. And anyone who's read Linda Tirado's polemic "Hand to Mouth: Living in Bootstrap America" knows that this country is literally rigged against the poor.

No industry is quite as emblematic of the systemic oppression of low-income Americans as payday loans. Some 12 million Americans take out payday loans every year, and those loans draw $9 billion in fees annually. That's a staggering number, and once you learn even a little bit about the system, it's easy to see how predatory payday lenders can rack up those huge profits. It turns out, banking while poor is big business in America.

Say you need a loan to carry you to the end of the month — your workplace shut down for a week due to flooding, maybe, and you don't have enough money to pay your rent. (You certainly wouldn't be alone; a 2012 survey found that 69% of all first-time payday loans were accessed to pay off recurring bills.) So you take out a payday loan to keep your landlord happy, providing the lender with a predated check or access to your bank account. Even if you do exactly what you're supposed to do and repay the loan within the prescribed time of two weeks, you will have paid an unbelievable 391% in interest on the loan in that time — the national average interest rate for payday lenders.

And if you, like 80% of all payday loan recipients, are not able to repay the loan within that two-week window, your interest rate rockets upward to 521%, and escalates rapidly from there. One-fifth of all payday loan recipients wind up in default and with their credit ratings destroyed, which effectively bars them from getting loans for the next seven years of their lives from anyone except, you guessed it, predatory lenders, who will continue to overcharge them at every turn. The average American family that earns $25,000 per year spends nearly 10% of that income on financial transactions — literally more than they spend on food in a year.

That profiteering is a feature, not a bug, of the payday loan industry. It's literally how the system is designed to work — to take advantage of people who have zero financial options or backup plans. Meanwhile, the rest of us just a rung or two up the economic ladder enjoy interest rates of 8-to-35% on our credit cards and personal loans. This system exploits people who are already economically vulnerable: those without college degrees, renters, young people, Americans with disabilities, and African Americans.

In this week's episode of "Pitchfork Economics," Nick Hanauer and Stephanie Ervin interview two payday lending experts who are helping to break free from this vicious payday lending cycle.

Mehrsa Baradaran is a professor at UC Irvine whose recent books are titled "How the Other Half Banks" and "The Color of Money: Black Banks and the Racial Wealth Gap." Anyone interested in the legacy of enforced poverty in America, and how payday lending is a continuation of Jim Crow-era racist policies, needs to be paying attention to Baradaran. She is a proponent of transforming US Post Offices into public banking centers offering affordable, inclusive financial services — including savings accounts and small lending. This may sound like a big, bold policy, but postal banking helped the United States recover from the Great Depression, and it's still in practice in nations with high standards of living around the world.

While thinkers like Baradaran are dreaming of how to create an alternate system that includes everyone in our economy, others are making great progress in repairing the current system. Cate Blackford co-chaired the campaign for Colorado Proposition 111, a 2018 state ballot initiative that reduced the annual interest rate on payday loans to 36% annually and eliminated other fees and charges that soak the poor.

Blackford's success with Prop 111 defeats the common perception of the payday lending industry as a necessary evil, or an untouchable colossus. It's true that payday loan reform bills have died in states around the nation, including my home of Washington state. Those high-profit margins enable predatory lenders to buy the best lobbying firms that money can buy, after all.

But the truth is that the American people know a scam when they see one, and once people understand the way that payday loans rip off the poorest Americans, they stand up and fight. Prop 111, for instance, passed by an overwhelming 77% of the vote in Colorado. When nearly eight out of every 10 voters join hands across party lines and make a unified stand, you know you're on the right side of history.

This is an opinion column. The thoughts expressed are those of the author(s).