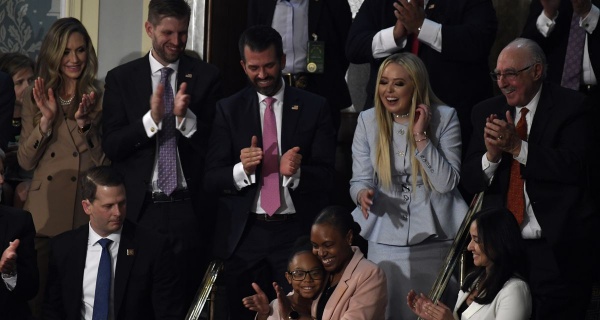 Everyone knows that Donald Trump is a master of trickery. His latest fraud was to pretend during his State of the Union address Tuesday that he is a friend to African Americans.

“We are advancing with unbridled optimism and lifting our citizens of every race, color, religion, and creed very, very high,” Trump said.

It is unlikely many African Americans were duped into believing that. We know exactly who Trump is, and no amount of wizardry can convince us otherwise.

This was not a show for African American viewers. It was a performance for his supporters, releasing them from any guilt they might harbor over the bigotry Trump spews and giving them the moral authority to claim that they stand for inclusivity.

It’s nice that Janiyah Davis, a fourth-grader from Philadelphia, was moved to the top of the list for an Opportunity Scholarship, which allows her to leave her public school and attend a private school — if that’s what she and her mother want.

But black parents know firsthand that the voucher programs promoted by the Trump administration are detrimental to public school systems that are overwhelmingly African American and Hispanic.

They divert money from urban schools, leaving many promising students behind without sufficient financial resources to meet their educational needs. The voucher system picks and chooses which kids are worth saving and leaves the others scraping for leftover pieces too sparse to go around.

If Trump really was interested in helping black and brown children succeed, he would invest fully in his so-called “government schools,” because that is where the most needy children are stuck, often left to fend for themselves.

And yes, it was heartwarming to see 100-year-old retired Brig. Gen. Charles McGee, one of the first black fighter pilots and among the last living Tuskegee Airmen, receive a standing ovation for his unrecognized heroism during World War II.

We were grateful that Trump, whatever his reason, bestowed upon him the honorary promotion to brigadier general in a private ceremony earlier that day. Some of us teared up at the sight of this distinguished black man adorned with badges of honor, standing next to his great-grandson, who wants to follow in his footsteps.

But we also know that Trump does nothing for which he gets nothing.

He and his supporters can now feel comfortable in their argument that every black person who wants to achieve success can obtain it. They can hold McGee, who was among the airmen assigned to the all-black squad after being rejected from white units because of their race, as an example of why racism is a cop-out.

They can feel good about themselves, having dismissed complaints that racism, bigotry and segregation are barriers to success. Black people who don’t succeed are just lazy, they believe. By honoring McGee, they can pat themselves on the back for promoting a colorblind society, though in reality, such a thing cannot exist.

Black people are proud of McGee for breaking barriers, but we also know that new barriers are erected every day. Some of the politicians who applauded him support the black voter suppression taking place in their districts in the form of purged voter rolls, picture ID requirements and truncated early voting schedules.

Trump can boast all he wants about black unemployment being the lowest in history for African Americans. He can shamelessly claim that black youth unemployment has reached an all-time low. But black voters will give him little, if any, credit for it.

We acknowledge that he has done no harm to the growing economy that began after Barack Obama rescued America from a Republican-generated recession. But we cannot ignore that black unemployment is double and in some states triple that of whites. Many blacks have jobs that don’t pay enough to support their families.

In Chicago, nearly half of young black men between the ages of 20 and 24 are out of school and out of work — and it’s not because they choose to be. Across the country, many African Americans suffer from lack of training and support systems that would allow them to compete for good-paying jobs.

Trump can talk all he wants about the demise of black poverty, but we know that poverty is still ravaging our communities. The poverty rate for African Americans is twice that of whites, and his administration is steadily taking away food stamps and other support systems that help the most vulnerable get by.

More than 8 in 10 African Americans described Trump as “a racist” in a recent Washington Post-Ipsos poll. He received only 6% to 8% of the black vote in 2016, and most polls indicate that he won’t do much better in 2020.

Trump knows exactly where he stands with African Americans. That’s why he didn’t hesitate to give the Medal of Freedom to right-wing talk show host Rush Limbaugh on the same night he appeared to be wooing black voters.

The anti-immigrant, anti-black rhetoric Limbaugh spews to his listeners appeals to the racist core of white Americans who fear that minorities are swindling away the privilege bestowed on them at birth. Many of these people comprise Trump’s base.

If any African Americans were unsure about who Trump really is, Limbaugh pulled back the curtain and revealed a scared little man masquerading as their savior. Like nearly everything good Trump claims to have done, his love for African Americans is just an illusion.

Dahleen Glanton is a columnist for the Chicago Tribune.