Opinion: Trump Will Be Remembered As The Man Who Made It Okay To Be Racist... Again 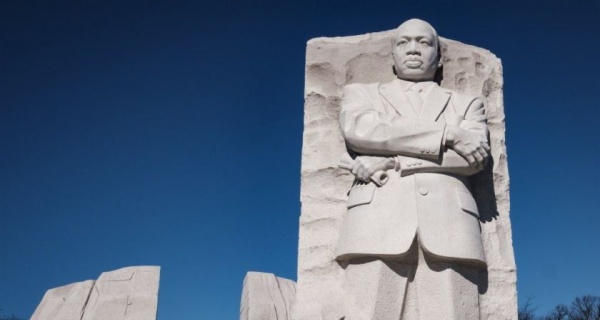 “We pause to honor the incredible life and accomplishments of Dr. King, who helped shape the Civil Rights Movement, gave hope to millions experiencing discrimination, and whose enduring memory inspires us to pursue a more just and equal society,” Trump wrote.

“As President, I remain committed to safeguarding the promise of our Nation and the values we share, the values that Dr. King so ardently worked to achieve. My Administration works each day to ensure that all Americans have every opportunity to realize a better life for themselves and their families regardless of race, class, gender, or any other barriers that have arbitrarily stood in their way.”

What a bunch of hooey.

This is from a man whose legacy will be brutal but simple: He made it OK to be racist again.

Almost everything he wrote in his MLK proclamation was at odds with who he always has been and what he has done since becoming president.

As long ago as the mid-1970s, Trump’s company was accused by the federal government of refusing to rent to black tenants and lying to black applicants about vacancies. He never admitted to wrongdoing, but signed an agreement promising not to discriminate against would-be renters based on the color of their skin.

In 1989, in a full-page newspaper ad, Trump called for the return of the death penalty to punish the black and Latino young men who were eventually exonerated in the attack on a Central Park jogger, an act for which he has refused to apologize or recant.

For years, he claimed Barack Obama was not an American citizen, giving a fig leaf to racists who could not tolerate the idea of a black president.

As he announced his presidential candidacy, he described Mexican immigrants as rapists and criminals. Once he became president, there was little holding him back.

He tried to shut American borders to people with dark skin. He described “very fine people on both sides” of the deadly white nationalist rally in Charlottesville.

He has systematically set out to destroy and disrespect the legacy of our first black president, with insults that have been both large and petty, and sometimes both.

Trump has inflicted grievous harm on Obamacare, leaving millions of Americans uninsured. He has rolled back environmental regulations and undercut consumer protections.

Last week, on Michelle Obama’s 56th birthday, his Agriculture Department rescinded the healthy school lunch rules that she spearheaded in 2010. (Imagine wanting to remove fruits and vegetables from the diets of children, who face unacceptable rates of obesity and diabetes, in order to give them more pizza and French fries.)

On Monday, the president made a brief, unscheduled, unannounced visit to the Martin Luther King Jr. Memorial on the National Mall in Washington. He and Vice President Pence stood facing the base of the monument, backs to the cameras, for about a minute, then left.

Unlike the previous three presidents, he did not participate in any service projects on the day we celebrate King’s birthday. Trump does not do service projects, unless you count flinging paper towels at hurricane survivors as service.

In a tweet, posted before his visit to the monument on Monday, Trump touted his own accomplishments rather than King’s:

“It was exactly three years ago today, January 20, 2017, that I was sworn into office. So appropriate that today is also MLK jr DAY. African-American Unemployment is the LOWEST in the history of our Country, by far. Also, best Poverty, Youth, and Employment numbers, ever. Great!”

On Monday, in the spirit of the King holiday, I went to see “Just Mercy,” a movie based on the memoir of Bryan Stevenson, the remarkable attorney who has devoted his life to challenging pervasive racial bias in the American criminal justice system.

Stevenson’s work, through his Equal Justice Initiative, has helped free dozens of unjustly convicted prisoners from death row. He has saved countless children from being treated as adult criminals and from overly harsh sentences.

He is a star of the TED talk stage, a MacArthur genius awardee and the creative force behind the new National Memorial for Peace and Justice in Montgomery, Ala., which honors the thousands of black men and women who were lynched in the South between the end of the Civil War and 1950.

“Just Mercy” is the story of how Stevenson saved Walter McMillian, a black man on Alabama’s death row, who was unjustly convicted of murdering a white 18-year-old woman.

Watching the movie was a wrenching emotional experience; the woman I sat next to handed me a tissue halfway through.

But it is also a lesson in persistence and tenacious hope. And it’s a profound educational opportunity, particularly for those who refuse to see that the American criminal justice system is almost fatally tainted by racism.

If I had one wish for this movie — apart from Oscars for the snubbed co-stars Michael B. Jordan, who plays Stevenson, and Jamie Foxx, who plays McMillian — it would be that President Trump screen it at the White House.

Would the movie cause Trump to have an epiphany about America’s legacy of racism, or about his own?

But it might spark a tiny bit of empathy in the cold, cold heart of our white narcissist in chief.