Opinion: When 140 Million Americans Are Poor, Why Has Poverty Disappeared From Public Discourse 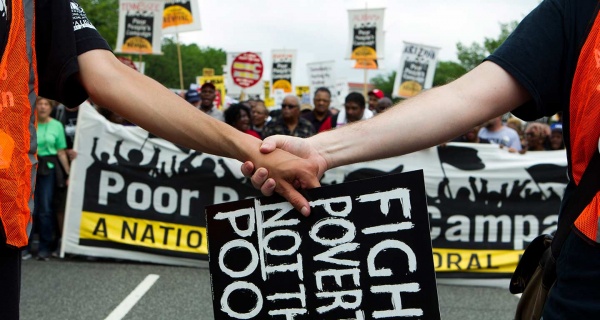 Someone from the Poor People’s Campaign called last week, disturbed that presidential candidates haven’t pushed hard enough for a debate on poverty. I responded by rattling off the sources of disagreement between the left and center candidates, such as single-payer health coverage and free college tuition.

I was missing the point. You can get so caught up in the minutiae that you lose sight of the big picture. Which is that more than 50 years after Martin Luther King Jr. spearheaded the first Poor People’s Campaign, nobody's really talking about poverty anymore. Candidates talk about protecting the middle class, but only a few address the nearly 140 million Americans (more than 43% of the population) who can’t cover basic living expenses.

The incomes of the top 1% of Iowans grew by 125% between 1979 and 2012, while those of the bottom 99% saw a 15 percent increase, according to the PPC, a national movement organized by religious and civil rights leaders and poor people. It has issued a "Poor People’s Moral Budget" that identifies a potential $350 billion in savings from annual military cuts and $886 billion in additional annual revenue from taxing the wealthy, corporations, and Wall Street. It plans a presence in Des Moines during next week's Democratic debate.

As the cost of rent has skyrocketed, government anti-poverty programs have been slashed. Monthly benefits under Temporary Assistance for Needy Families, an income support program, have declined steadily and are now at or below two-thirds of the federal poverty level (less than $26,000 a year for a family of four). By one estimate, it helps only 23% of poor families with children. And the U.S. Department of Agriculture recently adopted regulations to deny food stamps (now called SNAP) to nearly 700,000 Americans by tightening work requirements for adults without children.

Some of the worst changes are in how communities have re-segregated by race and class and how poor people are depicted as a drain on society. U.S. Department of Agriculture Secretary Sonny Perdue said of SNAP that it was becoming a "way of life" for too many Americans. Yet as Rev. William Barber II, a pastor and co-chair of the national Poor People's Campaign, pointed out, "When banks fail, politicians come together and say they are to big to fail and find billions to lift them up. But when 140 million people struggle and fail under the weight of poverty and low wealth, Republicans tend to racialize poverty, Democrats tend to run from poverty and only talk about middle class, and neither deal fully with policies to address the reality of poverty."

Barber cites a 2011 Columbia University public health study showing 250,000 deaths in 2000 were linked to poverty-related causes such as low education and poor social support. The lingering legacy of slavery, and consignment to live in polluted areas, drink contaminated water or work at unsafe jobs all have health effects.

"It’s hard work being poor,” said John Campbell of Des Moines, a black man of 63 who works at Bridgestone Firestone and is active in the steel workers’ union. Raised in poverty by a single mother of four who died of lung cancer in her 40s, Campbell enlisted in the Marine Corps Reserves and later in the Army from 1973 to '78 to escape his battles with drugs and alcohol. He went on to have sustained employment and an education through union programs. But recently, he's been out on disability, living on $300 a week. He had to refinance his house to pay the $3,000 deductible for the first of two knee replacement surgeries.

Campbell was one of several Iowans involved with the PPC who shared their own experiences with poverty. Eileen Sambos, a white woman in her 40s, suffers from narcolepsy, needs hearing aids and can't drive. She has worked at the same national retail chain in Ames nearly 23 years, but right now can't get more hours than one day a week. She lives with her mother, a retired custodian, in Ames, where she says rents are too high. Each has been evicted three times for inability to pay, and their current place has no light fixtures in the kitchen or living room, and mold in the bathroom. These battles sometimes leaves her stressed and depressed.

And she wondered: “Whenever there’s a shooting, they say the person is mentally challenged. Maybe it’s because they can’t afford treatment.”

The Rev. Jessica Petersen of Newton is a pastor at her church and one of three PPC chairs in Iowa. She grew up in a low-income household and said her mother had to struggle between working and caring for her younger sister, who had seizures. That's because Jessica's mother, who recently overcame homelessness, she couldn't afford quality child care. A United Way study found it costs $1,031 a month to have one infant and one preschooler in a licensed, accredited child care center.

Jessica's sister works full time cleaning a hotel for less than $10 an hour, and is on public health care. But Petersen says no dentist in Newton will accept that for preventive dental care, so she has to drive her sister to Des Moines.

Working with the Institute for Policy Studies, the Kairos Center and an organization called Repairers of the Breach, the PPC compiled data on every state. It found that 1.1 million Iowans (35%) are poor or low-income, including 317,000 children. But Iowa spent at least $642 million over the past five years in public subsidies for corporations. It identified links between cuts in federal housing assistance since the 1970s and rising homelessness. And it showed how the annual military budget of $668 billion "dwarfs" the $190 billion allocated for education, jobs, housing, and other basics. Student debt stands at $1.34 trillion.

“Since the '60s and '70s we’ve virtually erased poverty from public discourse,” said Barber in a phone interview. So the 400 wealthiest people have quietly amassed more than the bottom 204 million combined.

This campaign isn't interested in piecemeal policy proposals. It wants Americans to connect the dots between a half-century of wars that haven't made us safer and the 140 million Americans who can't make ends meet.