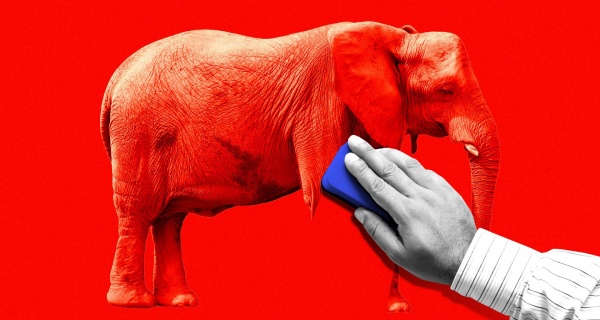 It’s still early to project how next year’s congressional elections will go. But the folks at Inside Elections have updated their predictions for 12 House contests in the Democrats’ favor, with only one shifting toward Republicans. It’s a good reminder that unpopular presidents typically drag their parties down.

And, yes, President Donald Trump is unpopular. In fact, through 1,048 days, his average approval rating is back to being the very worst of the polling-era presidents. According to FiveThirtyEight, he’s at 41.6%; the next worst at this point was Barack Obama at 44%. Disapproval ratings tell an even worse story: At 53.5%, Trump is the only president through 1,048 days topping 50% (with Obama again the next-worst at 49.7% and no one else above 42%).

This is dangerous territory for Republicans. Even if Trump rallies between now and November, it may be too late to help his party much. Candidate-recruitment season is already well underway, and those updates at Inside Elections mostly reflect how certain seats are becoming easier for Democrats to defend or harder for Republicans to hold based on decisions by politicians who are anticipating a tough contest for the president’s party.

The good news for Republicans is that impeachment proceedings have hardly budged Trump’s popularity, despite a steady stream of seemingly negative stories about him. The bad news is that there’s also no sign that impeachment is hurting Democrats or helping Trump — and he needs help. In fact, assuming he survives impeachment, the most pressing question continues to be: Is there anything that could happen at this point that would make Donald Trump significantly more popular?

Trump’s best hope is probably that the election itself will persuade some independents and Republican-leaning voters who currently disapprove of him to change their minds and support him, perhaps because they intensely dislike whoever the Democrats nominate. Unfortunately for Trump, elections when the president is on the ballot tend to be focused on the incumbent, not the challenger.

Beyond that, though, it’s increasingly hard to imagine what could spark a public-opinion rally in Trump’s favor. Perhaps a couple of quarters of much faster economic growth would help, although most economists expect no such boom. There’s also the possibility that Trump could start behaving differently, but that seems even less likely.

This isn’t to say that Trump can’t be re-elected, or even that he’s necessarily an underdog. He could feasibly win with a mid-40s approval rating. But the kind of solid victory that would help Republicans add seats in the Senate and recapture a House majority? That would require a president much more popular than Trump has ever been during his time in office — and that means something would have to happen to really change his presidency.