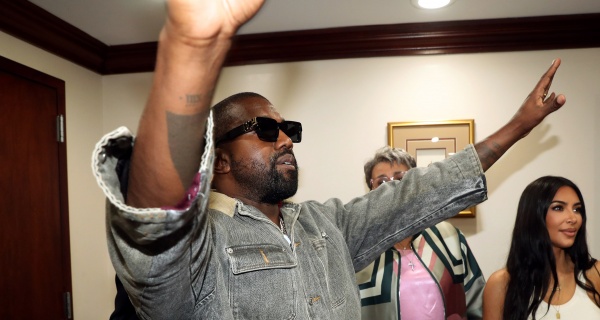 Once upon a time, I used to believe in a certain version of Kanye West — the man who condemned then-President George W. Bush for not caring enough about Black people during Hurricane Katrina, or the straight Black man willing to speak out against homophobia in hip-hop — but no longer. His narcissism, his self-loathing and his politics have been on full display long enough for me to know that I don’t need to attend Sunday Service or subject myself to a "Jesus Is King" listening session. West's latest shtick is clearly nothing more than him showing us a Black Pat Robertson in a dumb red hat with a beat machine, with pretensions of being gospel star Kirk Franklin.

Franklin, notably, recently earned headlines after boycotting the Christian music Dove Awards, the Trinity Broadcasting Network and the Gospel Music Association "until tangible plans are put in place to protect and champion diversity," after part of his acceptance speech addressing police brutality was edited out of the broadcast. This Kanye would never.

So I’ll wait for Franklin's record instead of giving "Jesus Is King" any streams. My Jesus knew slavery wasn’t a choice, but helping false prophets profit off of his name is.

Much like Trump, whom he has described as a “brother” who shares his “dragon energy,” West reimagines Christianity in a way that leaves more than a few Christians scratching their heads. During his appearance on "The Late Late Show," for instance, West bestowed the Lord with high praise for doing more for him than his accountant apparently ever could.

West went on to say: “And people say, ‘Oh, don’t talk about these numbers.’ No, people need to hear someone that’s been put into debt by the system talk about these kind of numbers now that they’re in service to Christ.”

Kanye West is not the first person to espouse a version of “prosperity gospel,” which is more or less Christianity for hypercapitalists and folks who aspire to be rich. To think that God’s great reward on earth is providing wealth to the highly favored is a dubious notion to me, but perhaps I’ve yet to reach the right tax bracket to be eligible for divine intervention.

What’s more clearly repugnant, however, is how this supposed born-again Christian has continued to antagonize and berate his own people.

First, after wearing a MAGA hat and claiming Trump was “God’s practical joke on all liberals” when asked about his ongoing support of Mr. Two Corinthians this week, West said the Black people who take issue with his conservative stances are stuck on “the idea of victimization mentality,” and claimed we were “brainwashed.”

He also said that Democrats are "making us abort our children."

I did manage to both chuckle and sigh at this anecdote from West from the same appearance: “When I was sitting at the Met Balls, when I was sitting in front of white people and they thought, ‘I wouldn’t thought you’d like Trump because of the racism’ … So, you mean to tell me I make every decision based off my color?”

West added: “I’d rather deal with somebody who call me a N-word to my face than a person that sign me to a lifetime deal with a 255-page contract. I’d rather know what I’m dealing with.”

What he is dealing with, by the way, is someone who wouldn’t rent to Black people, called for the execution of innocent Black men, has flippantly spoken of Black people and communities with utter disdain, and gained political legitimacy only after trying to strip the nation’s first Black president of his.

It harked back to the days when West duly complained about racism in the fashion industry while aligning with racists in fashion.

West seems to be under the unfortunate impression that being contrarian makes him special, but all his contrarianism does is illustrate his hollow view of Black voters and Black people as a whole.

And sadly, so does his assertion to Big Boy that Black people have no culture.

This sophomoric, meandering explanation of how culture functions is facile, but it shows how little West thinks of his own culture even as he uses a Black cultural tradition — gospel music — to try to make amends with the community he abandoned for the love of a white supremacist game-show host who somehow became president.

So, why should I listen to a Black man who doesn’t even like Black people that much? What good word can I get from the supporter of a megalomaniac whose reign has led to the ruins of far too many of our most vulnerable with well over a year to go? How is West any different from the kind of white evangelicals so many Black people know already to avoid?

And if one needs any further proof that West’s Christianity is nothing more than right-wing evangelism, look no further than the mid-September stop the Kanye-led Sunday Service made at the Missionary Baptist Church in Atlanta. Plenty of videos floated around, but the optics were not truly captured: West, a Black Trump supporter, was invited to appear at the invitation of Jamal Bryant, a homophobic and sexist pastor who once harped about “sanctified sissies” and quoted Chris Brown’s “these hoes ain’t loyal in a sermon.” (Bryant had replaced the late Eddie Long, the homophobic pastor who was accused of sexual abuse by multiple young men and boys.)

Being Black, I don’t typically have to come across any Trump supporters at Thanksgiving, but I have come across “Christians” like these men. And, as a recovering Catholic, I am all too familiar with the habit of powerful men using religion as both cover and bludgeon.

West falls in line with all of the conservative Catholics and select evangelicals of varied races and ethnicities who claim to love and live for the teachings of Jesus Christ, but, in terms of their respective political ideologies, wouldn’t bother spitting on Jesus if he caught on fire while trying to cross Trump’s pretend border wall with terrorized migrants in need of salvation.

They boast of a love of God, but by and large, their greatest faith lies with the patriarchy, white supremacy and/or money. We know for whom he would vote, we can now confirm that, Black choir or not, he’s worshipping the way so many bigots across America do, and it's clear his embrace of Jesus comes as much from a love of money and power as a love of God. Jesus might be king, but it's not at his altar that Kanye is worshipping right now.