Opinion: Donald's Message To The World: America's Words And Values Are Worthless 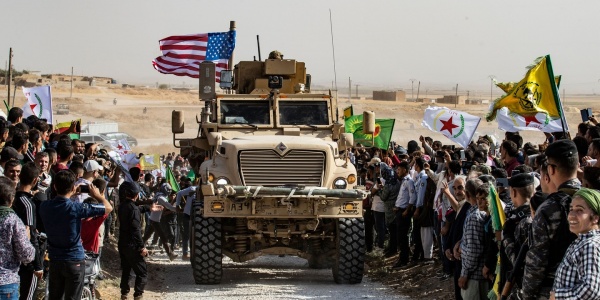 These are words every American veteran knows. We say that to each other, and we say it to our allies.

Donald Trump only says it to our enemies.

Trump said he “fell in love” with Kim Jung Un, curtailing our military exercises and repeatedly handing him propaganda victories, for almost nothing in return.

Trump had Vladimir Putin’s back in Helsinki when he said he believed Putin over our intelligence community. And now we’ve learned that he withheld military aid to our ally Ukraine in exchange for exploring a conspiracy theory against Joe Biden.

Now, with Trump’s retreat from Northern Syria, he is choosing to have the back of Turkish President Recep Erdo?an, a known Putin protege, rather than the Kurdish fighters who have fought alongside American troops against ISIS and other terrorists for decades.

And make no mistake: ISIS will be celebrating. The only thing stopping ISIS right now is the Kurds in Northern Syria, supported by the American troops Trump just told to retreat.

Ask any American veteran of the Middle East who has worked with the Kurds and he or she will tell you they’re our most trusted ally. After years of brutal fighting, they now hold an estimated 11,000 ISIS fighters in prison — prisons that will be overrun by the Turkish troops Trump backs.

Escaped ISIS fighters will combine with the new generation of fighters ISIS operatives are recruiting in the refugee camps in Northeast Syria to undo the years of progress we’ve made against this international terrorist group.

Remember, this isn’t the first time Trump has tried this. Former Secretary of Defense Jim Mattis, under whom I served in Iraq, resigned rather than allow the president to withdraw Americans from Northern Syria, because he knew it would hand ISIS a victory.

Republicans agree. It’s encouraging to see Senators Mitch McConnell, Mitt Romney and Lindsey Graham speaking up for the Kurds and against the president. But Trump has run over these Republicans in the past, just as he’s running over the Kurds today, and it looks like he will again.

Beyond the physical danger President Trump's decision creates, there is moral danger, too. When America betrays its allies and sides with strongmen, it sends a message around the world that our word and our values are worthless.

It emboldens Russia and encourages Putin to continue undermining our elections and destabilizing Europe. The next time we ask the Palestinians to make concessions to achieve a peace plan, they will rightfully point to the Kurds as a reason not to trust us. Israeli pundits are already pointing at this decision as a reason for Israel to act unilaterally in the region. And, if the president wants to succeed in North Korea, he will need South Korea, Japan, Australia and our other allies to trust him. I wouldn’t blame them for doubting his word.

Republicans in the House and Senate, and Americans across the country who care about the value of America’s word, need to hold the president accountable. To the American patriots who support the president, I would pose this question: For how long are you willing to watch him erode our values, cozy up to dictators and sell out our allies — and still tell him, “Mr. President, ‘We’ve got your back.’”