Opinion: Impeachment Is About More Than Trump. It's About Stopping The Republicans Who Enabled Him 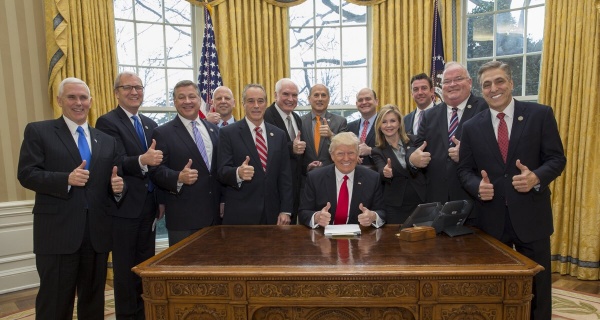 Democrats must show that Republicans made Trump’s corruption inevitable and count on 2020 voters to end this nightmare. They are our last resort.

Donald Trump keeps racking up high crimes like they’re rounds of taxpayer-funded golf, threatening civil war or execution as punishment for any attempt to hold him accountable. You would assume he’s the greatest threat to democracy that we face.

But you would be wrong. The Republicans in Congress who are inviting Trump to continue his torching of the Constitution are the greatest threat to this republic that any of us will ever see. And impeachment will fail unless it exposes this complicit and cowardly GOP.

At long last, we’ve finally arrived at a serious effort to hold accountable a man who has been violating his oath of office since the words came out of his mouth. But for this process to be a success, it needs to do more than charge the most obviously corrupt president in American history for posterity or even help us “actually find out every rotten thing he and his kids have been up to,” as The New Republic put it.

It doesn’t matter whether it focuses strictly on charges that follow from the government whistleblower’s depiction of Trump pressing the president of Ukraine to frame his political opponents, or expands to encompass all his multifarious documented abuses from obstruction of justice to his corrupt, endless and multifaceted self-enrichment.

Impeachment must have a singular goal: It must make the case that our democracy is at stake. To do this, Democrats must show that the GOP made Trump’s corruption inevitable. Thus, the American people must check the Republican Party with furious anger.

The Founders clearly anticipated that we’d eventually endure a wannabe tyrant. Their fears of an aspiring dictator sound like the Hollywood Medium summoning the nightmare of this reality star presidency.

James Madison worried about a president who might “pervert his administration into a scheme of peculation or oppression. He might betray his trust to foreign powers.”

Alexander Hamilton warned that a man "unprincipled in private life desperate in his fortune, bold in his temper, possessed of considerable talents … despotic in his ordinary demeanor — known to have scoffed in private at the principles of liberty" might "throw things into confusion that he may ‘ride the storm and direct the whirlwind.' "

George Mason asked, “Shall the man who has practiced corruption and by that means procured his appointment in the first instance, be suffered to escape punishment, by repeating his guilt?”

Trump’s conduct, as The Atlantic’s Adam Serwer argues, is “why the impeachment clause exists.” But the Founders could not foresee the colossal chickenheartedness of the Republican Party. They could not predict that a quasi dictator would be effectively invited to commit crimes, knowing that even if the people's House impeaches him, he will always have the 34 votes needed for acquittal in a Senate trial.

Then came the installation of Attorney General William Barr, who holds what amounts to a papal infallibility theory for Republican presidents. Barr has allowed Trump to evade the impeachable findings of Mueller’s report. Since then, Trump and his “lawyers” seem to have marshaled the awesome power of the presidency in an attempt to destroy a possible 2020 opponent and undermine the official finding that Russia interfered in our 2016 elections. They’re virtually begging for Russian President Vladimir Putin to repeat these attacks on U.S. democracy.

The most contemptible aspect of Trump’s efforts is the direct involvement of Barr, whom the president mentioned repeatedly on the call pressing Ukraine to dig up dirt on the Biden family and whose department decided there was nothing to investigate, and Secretary of State Mike Pompeo, who was on the call and whose diplomats were involved as well. The American people no longer have a State Department or a Department of Justice. Those are now Trump properties — and you know what they say about Trump properties. They're infested.

2020 voters are our last resort

With an administration that objects to any oversight by the people’s House and a Department of Justice far more interested in hiding Trump’s taxes than looking into the Trump administration’s crimes, the importance of impeachment now extends beyond what even the Founders imagined.

It is the only hope for checking a lawless president who has no interest in fair elections or anything that threatens his grip on power.

In 2016, Senate Majority Leader Mitch McConnell successfully quashed a bipartisan response to foreign interference in our elections, which we now know was welcomed by the president’s campaign. McConnell did this in private, and voters only found out after the election.

McConnell, who is up for reelection next year, is now raising money by calling himself "the ONLY thing stopping Nancy Pelosi from impeaching President Trump." Barring a miraculous 11th-hour conversion, he will endorse Trump’s betrayal of our self-governance on the floor of the Senate. And at this point, it looks like Republicans in Congress will wager any sacred honor they have left right along with him.

This likely won’t be enough to shame a party with no soul to save. But it will make the case to Americans that We the People are the only check our democracy has left.

Jason Sattler, a writer based in Ann Arbor, Michigan, is a member of USA TODAY’s Board of Contributors and host of "The GOTMFV Show" podcast. Follow him on Twitter: @LOLGOP