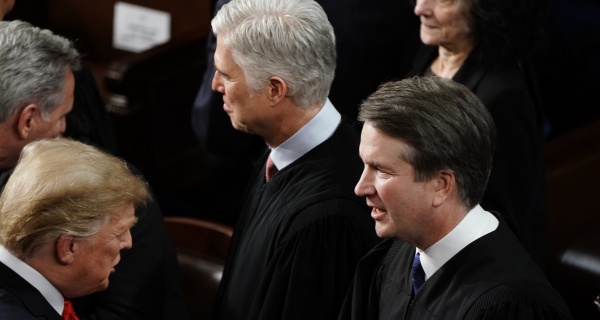 In the age of Trump, I remain an optimist.

It’s easy to get depressed if you get locked into dark thoughts about how a third of the country is not concerned about the chaos, bullying and lies coming from the Trump White House.

But optimism rises in me whenever I focus on the reality that for all the political madness, most Americans still go to work, go to school and take care of their families.

We are not a broken country.

Axelrod warned that if a vacancy on the Supreme Court arose next year, and if the door is opened to filling it by Senate Majority Leader Mitch McConnell (R-Ky.) — despite McConnell having previously blocked Obama nominee Merrick Garland in comparable circumstances — “it will tear this country apart.”

Axelrod’s prediction was prompted by news that 86-year-old Supreme Court Justice Ruth Bader Ginsburg recently had treatment for a pancreatic tumor. She is one of four justices who make up the liberal minority on the court.

Justice Stephen Breyer, another member of the liberal minority, is at an age — 81 — where he might consider retirement.

One of those two seats was a vacancy that McConnell preserved by stopping Garland, a moderate jurist, respected by both Democrats and Republicans, from being confirmed.

Axelrod’s depressing political forecast is rooted in the bald hypocrisy being practiced by McConnell.

Remember McConnell prevented Obama from putting a justice on the high court with nearly a year to go before the next election.

But now, McConnell contends, Trump can put a nominee on the court with a year to go before the next election because the same party, the GOP, controls the Senate and the White House.

This is a remarkable, self-serving double standard. It shows a blatant lack of fair play, certain to ignite bitter political division. With a 53-47 majority in the Senate, the Republicans’ only concern is losing the vote of one of their own — say, Sen. Susan Collins of Maine. With no filibuster, the GOP does not need any votes from Democrats.

McConnell’s goal is to secure his political legacy as the man who cemented a conservative majority on the high court to counter the liberal ideas emerging from the rising number of younger, more racially diverse and more progressive voters in the country.

He will also go into history as the man who drained all trust from the Founding Fathers’ commitment to a nation of laws beyond the tyranny of any one political ideology or party.

It does not take a fortune-teller to predict that another conservative on the court will stir up rage.

“Senator McConnell is a hypocrite,” Senate Democratic Leader Charles Schumer (D-N.Y.) tweeted back in May.

He added, "Seriously it’s no surprise. @SenateMajLdr McConnell lives for GOP judges because he knows the GOP agenda is so radical & unpopular they can only achieve it in courts. Anyone who believes he’d ever allow confirmation of a Dem President's nominee for SCOTUS is fooling themselves."

In an unprecedented move, five Democratic senators filed an amicus brief last month urging the court to drop its review of a landmark gun control case because of the National Rifle Association’s work to inflame public opinion and bias the court.

“The Supreme Court is not well,” the senators wrote. “And the people know it. Perhaps the Court can heal itself before the public demands it be restructured in order to reduce the influence of politics.”

Meanwhile, South Bend, Ind. Mayor Pete Buttigieg (D), who is running for president, has proposed increasing the number of Supreme Court justices from 9 to 15.

He told NBC News he is open to “whatever Supreme Court reform will depoliticize this body” and change the perception that the court is “an almost nakedly political institution.”

That idea would require changing the constitution.

But if the country is up in arms at the sight of an unbalanced court, then changing the number of justices will get consideration.

Pew notes: “The 26 percentage point difference between the two parties is among the widest it has been over the past two decades.”

A Quinnipiac University poll in late April indicated 81 percent of registered voters nationwide agree that the process for confirming justices is “too political.”

David Wasserman of the Cook Political Report reported last August that the 52 Republican senators who began the 115th Congress — the session preceding the current one — were elected by only 18 percent of the U.S. population.

That figure hardly changed massively in last year’s midterms, after which the Republicans returned with 53 seats.

One way or another, a majority of the American people are being denied any voice in selecting the justices to sit on the Supreme Court as a result of McConnell’s unscrupulous tactics.

We are rapidly approaching the breaking point predicted by Axelrod.

If that dark moment is to come, history will record that it was McConnell — not Trump — who broke apart the country.

Juan Williams is an author and a political analyst for Fox News Channel.