Opinion: Mitch McConnell Might Be As Bad As Trump 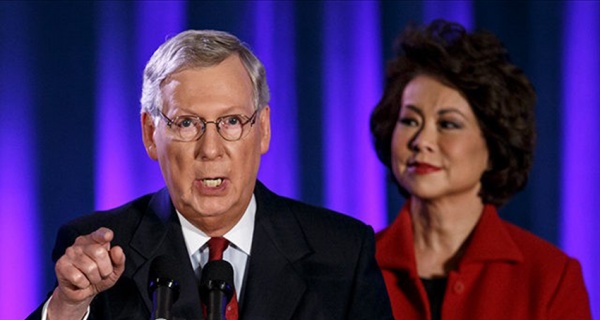 Senate GOP leader Mitch McConnell is from Kentucky, but he epitomizes what is wrong with the nation’s capital.

McConnell is a 77-year-old white man who has been running the Senate — deciding its agenda and what will or will not be voted on by all 100 senators — longer than any previous Republican in history. He was first elected to the Senate in 1984 and was last re-elected with just over 56 percent of the vote.

McConnell’s second wife is Elaine Chao, another Washington fixture who has served in a number of Cabinet posts and is currently heading the Department of Transportation. McConnell is worth an estimated $22.5 million, most of it inherited from Chao’s mother. Chao’s Chinese family runs a prosperous shipping company; she now oversees America’s shipping industry.

We bring up McConnell, the Senate majority leader, because unequivocally he will never be awarded any sort of profile in courage award.

McConnell is steadfastly refusing to bring up two House-passed bills that would mandate stiffer background checks on sales of guns. After a week of devastating shooting massacres in California, Texas and Ohio, McConnell would not bring the Senate back from its August recess to vote on any form of common-sense gun control. That includes taking away guns from dangerously mentally ill people (red-flag laws), reducing the size of high-capacity magazines, making military-style assault weapons illegal, buying back unwanted guns or requiring tougher background checks.

This is despite the shooting deaths of so many Americans in schools, movie theaters, churches, mosques, temples, festivals, offices — no place is safe. Two hundred fifty-five Americans have died in mass shootings in seven months this year.

Rep. Tim Ryan, D-Ohio, said, “Come on, Mitch McConnell, where are your guts? Get off your … and get something done. ... You could walk out of the Senate with your head held high that you actually did something other than pad your pension.”

Just days ago McConnell was dubbed “Moscow Mitch” for refusing to bring up bipartisan legislation that had passed the House to strengthen America’s elections from manipulation from foreign governments such as Russia. Russia is now proven to have intervened in the 2016 elections in favor of Donald Trump. Intelligence agencies say there is no doubt that Russia will try to interfere in the 2020 elections and is already preparing. Nothing is being done to forestall that.

McConnell first came to the attention of many Americans when he refused to permit confirmation hearings on former President Barack Obama’s nomination of Merrick Garland, widely respected by both Republicans and Democrats, to be a Supreme Court justice even though Obama had another year in office.

Trump has now put two justices on the court, turning it solidly to the right, and hopes to win a second term and name one or two more. For that alone, McConnell will support Trump, right or wrong, through racism and white supremacist rants, through trade wars, through alienation of allies, through disregard for the environment, through praising evil dictators, through one moral outrage after another.

Time after time after time, McConnell has defended Trump’s indefensible behavior and policy positions that at one time were anathema to the Republican Party.

It’s about clinging to power at any cost. It’s about getting right-wing judges appointed to lifetime judicial posts who will be counted on for decades to keep the anti-abortion, pro-gun, tax-cuts-for-the-rich, social-safety-net-slashing, unlimited-campaign-donations-for-special-interests and anti-business-regulation agenda in full throttle.

McConnell listens and smiles enigmatically as Trump defends white supremacists, talks about “invasions” of immigrants, separates children from parents and imprisons them, taunts minority members of Congress and abuses his power while being compared more to George Wallace than George Washington, in the words of former Vice President Joe Biden.

McConnell smiles and does nothing but wait to hear from Trump, applaud and implement Trump’s agenda.

Perhaps even more than the morally bankrupt Trump, McConnell is the worst among us. He sees evil and does nothing but permit it to flourish. He and his profit at the expense of others. He closes his heart to what is right and good about America. He is one of the most powerful people in the world but doesn’t understand that power has responsibilities as well as privileges. And he is very likely to hold on to that perch of power for the foreseeable future.

• Ann McFeatters is an op-ed columnist for Tribune News Service. Readers may send her email at amcfeatters@nationalpress.com.