Opinion: African-American Supporters Of Trump Will Be Reaching Out To You Soon 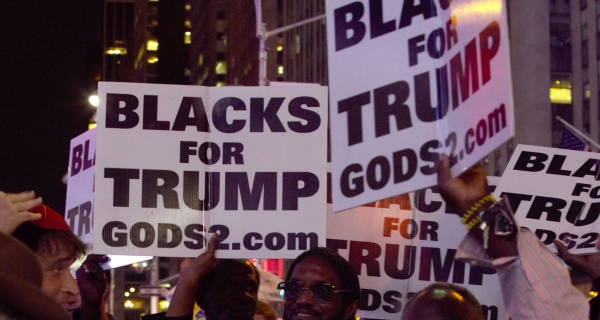 According to a new report from Politico, Donald J. Trump’s reelection campaign “has been quietly reaching out to prominent African Americans about joining its latest coalition,” African Americans for Trump, which is “intended to boost Republican support in the Black community.”

I’m not laughing my ass off at that sentence, you are.

Who are these “prominent African Americans” in question? The piece doesn’t say, but I’m assuming Jim Brown, BET founder Robert Johnson, Stacey Dash, those B.A.P.S.-looking buffoons Diamond and Silk, Tina Campbell, the mean Mary of Mary Mary, and Hip Hop David Koresh, or as y’all know him as, Kanye West. I imagine Steve Harvey was sent an invitation, but Marjorie Harvey presumably had said invite set on fire. Anyone else I’m forgetting to list is by design, but boo hiss all the same to any wayward Negro who grovels before the burnt orange-colored White supremacist president.

What are the goals for Goofy Negroes For Habanero Hitler? Apparently, “the campaign hopes that if it can shave just a few percentage points off Democrats’ overwhelming support among Black voters, it can boost voter turnout in eight or so key states such as Michigan, Wisconsin and Pennsylvania—each of which Trump won in 2016 by less than 1 percentage point.”

A Quinnipiac University poll released on July 30 showed that 80 percent of Black voters surveyed consider Trump a racist, so one imagines their real hope is to tag in their longtime BFF Jim Crow and depress the Black vote in order to win. But, for the sake of following the language of this scam, us Blacks they are theoretically courting will be told to “ignore the president’s words and instead focus on his policies, the state of the economy, the low unemployment rate, the passage of criminal justice reform and the creation of Opportunity Zones, which are meant to bolster investment in underserved or poorer cities.”

Yes, ignore continued disparagement of Black communities, calls for Black women in Congress to “go back to where they come from,” ongoing defense of White nationalists that includes the employment of false equivalencies, and recent feigning of not only knowing what an A$AP Rocky is but actually caring about it—all because of the citation of statistics that purportedly show how The Grand Wizard is doing good by us, “The Blacks.” I have a hard time believing that line of thinking is going to attract a bunch of Black voters to toss on a white hood and join the Trump hate train.

I have even bigger doubts about the person in charge of leading this effort and her capabilities. You remember Katrina Pierson, senior adviser to the Trump campaign, right? Maybe not by name, but undoubtedly her foolishness rings a bell.

She’s the one who once went on television who acted as if Donald Trump wasn’t actively courting the support of White supremacists and nationalists. She’s also the one who lied on former President Obama—accusing him of starting the war in Afghanistan. And the one who defended Melania Trump plagiarizing former First Lady Michelle Obama.

Basically, when considering the sea of Trump folks who routinely embarrass themselves on national television, Katrina Pierson is the Black one. Of all the Black folks who have appeared on WeTV reality shows that have the potential to influence Black voters, a spare Braxton sister has a much stronger shot than Katrina Pierson. But zoom, look at her go, y’all.

As fate would have it, the same week this story about The African Americans for Trump Coalition was published, the founder of Students for Trump pleaded guilty to running a $46,000 scam in which he pretended to be a lawyer and gave out legal advice. Very fine people.

Let another one of the Negro League deplorables in on this scam, Bruce LeVell, who led Trump’s National Diversity Coalition in 2016, tell it, the group has an ideal target. “I think Black male voters, especially, will be a game-changer for President Trump’s reelection.”

He’s talking about high school educated Black men. According to CNN Exit Polls, 13 percent of Black men supported Trump. I recently found myself in the middle of a fade by an OG barber who, in the middle of my cut, defended Trump against charges of racism — largely on a gross misunderstanding of critical race theory that I did not bother to explain because he could already tell I was getting pissed but I couldn’t leave with half a fade. Do I think he will vote for Trump in 2020? No, but he’s an ideal target for this sort of campaign — in theory anyway. Thankfully, Black conservatives tend not to know where to get a good haircut, so they’ll miss this target.

Even so, should you find yourself a future target by The African Americans for Trump Coalition, do the world some good and curse them smooth out. I don’t believe in civility when dealing with sycophants for the intolerant and utterly insufferable. So, yeah, tell them to report to the seventh circle of hell stat because not even Black Jesus riding in a platinum float with Luther, Whitney, Aretha, and Black Michael Jackson could get a substantial portion of the Black vote to vote for Trump.

And if they dare repeat Trump’s infamous question to Black people during the 2016 campaign – “What the hell do you have to lose?” – tell them probably the right to read.